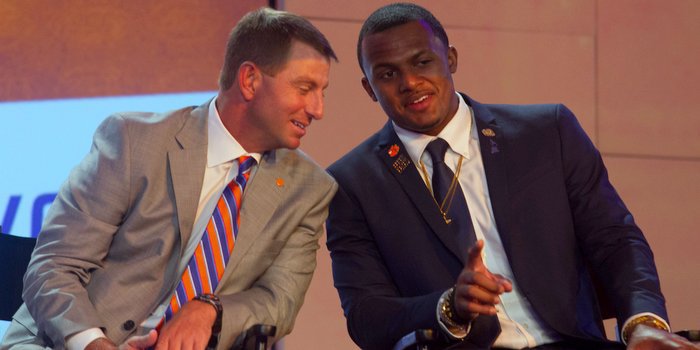 I saw that Trent Richardson practiced at tailback for the Tide last week leading up their game with LSU on the practice squad to emulate Leonard Fournette.

I guess Marshawn Lynch has done this before for Cal as well. Maybe other players... I'm not sure.

I'll say that the article said both teams had the proper permission before allowing these former NFLers to practice with their alma maters from the conferences and NCAA... but that doesn't mean its right.

I played with a group of male players playing pick up ball against a D 1 women's college basketball team 4 - 5 times one summer but it wasn't arranged by the coach, supervised in any way or certainly not the week before their rivarly game. It wasn't even on campus.

Can you explain this loophole in the rules... if it is one? Is this a tactic that Clemson has employed? With all the crazy NCAA rules - why is this ok?

I had never heard of this until this week. I do know Nick Saban got everything cleared and it is within the NCAA rules. I have heard rumors of Tajh and Jacoby practicing, but can't confirm that. It may just be a rumor. Philosophically I totally disagree with this being legal. Why limit the number of walk-ons but then let anyone who is not even a current part of your team practice. This is like the satellite camp deal. The NCAA originally cleared it but came back and did away with them. I think they will re-examine this after the season.

There is a big debate on Tnet and plenty of name calling around the country about Ben Boulware’s tackle in the Syracuse game. Opponents like to call Ben a dirty player but I am sure they wish they had one like him. To me, he is aggressive and plays until the whistle blows. I scanned the NCAA rules to see if picking up a ball carrier and taking him to the ground in any manner is illegal. I found nothing. It seemed to me Ben already had the player in the air before the whistle blew. It is not up to Ben to determine if forward progress was stopped. Refs with whistles do that. Here are my questions: In your opinion did Ben already have the player in the air before the whistle? Will you and your resources find out if the tackle was a legal play? As they say on Tnet, TIA in advance.

I love Ben Boulware. He is one of my favorite players. However, I think it was excessive. Put it this way, would you feel differently if a linebacker from FSU did it to Deshaun Watson?

Thank goodness a complete beat down of Syracuse and a game that left little doubt that Clemson is a really, really good team deserving of it's ranking. Some random thoughts are about all I can come up with this week.

I guess there are so many games on television each week that it must be hard to find competent announcers as was the case Saturday. In watching the playback, it only took about the first 3 minutes of the game to realize that Dave Pasch, a Syracuse grad, and Greg McElroy, an Alabama grad did zero homework and only are interested in a paycheck. First, Pasch started off by saying that true freshman, Nolan Kuene kicked off for Clemson. I am sure Kuene is a great young man but unless he was wearing Greg Huegel's uniform, he did not kick off. Later in talking about Hunter Renfrow, Pasch said that he was dependable but only had a few catches this year. Pretty hard to catch the ball when you are not playing because of injury. I quit listening and just watched.

Hard to find fault when you are 9-0 and win 54-0 but could it be that Clemson has had problems fielding punts because they do not have a punter who can kick anywhere near as far or as high as its opponents? Hard to perfect catching good punts when you don't see them in practice.

Here are some numbers: 5, 10,13, 30, 44, 53 and 69. These are not lottery numbers but were Lamar Jackson's touchdowns Saturday, yes seven. I realize the talking heads on the Clemson pregame football and other broadcasts have to find something to talk about but the Heisman contest is totally over and will be a landslide vote. Even it did not happen last year, the Heisman is supposed to reward and this year there is no question that is Jackson.

You are seeing come true what I said before the season and that is that Auburn would be a tough win. Disliking a former Clemson coach does not mean that he cannot coach and it is great for Clemson every time Auburn wins. In the same vein, South Carolina's wins over Tennessee and Mizzu in no way equate to beating Clemson but Muschamp has the Coots playing better and it may not be the cakewalk that we hoped for early in the year. Care and full attention is needed on November 26 when hopefully the Tigers will be going for a second 12-0 regular season.

I have heard the worst announcers this season. The job isn't easy but preparing for a game where Tim Bourrett and his staff makes it easy when you do a Clemson game.

Clemson has a machine that simulates punts and can crank it up for deeper and higher punts.

I agree that Jackson is the heavy favorite. But remember there is still a bunch of football left to be played.

I still am not impressed with Auburn. What is Auburn's best win? They are getting credit for beating LSU and Arkansas. I have no respect for LSU and Arkansas. Auburn will get exposed before the end of the regular season. The defense is good, but the offense has issues.

South Carolina is getting credit for beating UMass, a dysfunctional Tennessee team and a bad Missouri team. Florida looked awful last week too. South Carolina will get exposed again in Clemson.