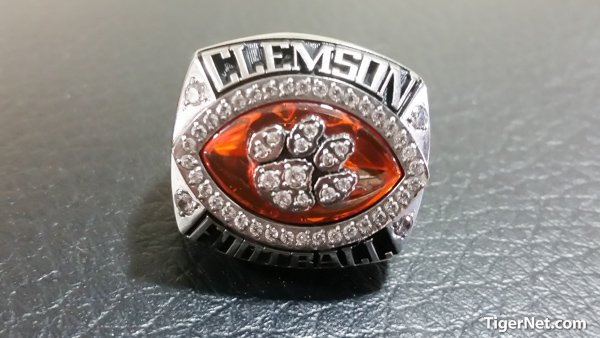 I just finished reading "From the desk of Dan Radakovich" on

Clemsontigers.com. At the beginning of the letter there is a link to "Comparison of Student Support." I found it very enlightening how much some schools take from their students. You have probably read this list, but I thought I would mention it just in case you hadn't. Thanks and I enjoy your show each morning.

Thanks for the info. There are so many aspects of this subject, and there has been a lot of people who don't have all of the facts. I found the article informative. Thanks again.

Mickey, I saw today where we offered Baron Browning at 5 star out off Texas. He has an impressive list of offers. Clemson just offered him, so it seems we are a bit late to the party, except, maybe he called us. This leads me to my question. I wonder about recruits contacting us. I am sure it happens often, but I think about a Browning situation and why would we offer him unless he wanted an offer from us. I might be a bit biased by thinking this way, but it makes me wonder. Just happy to see him say Clemson University in his tweet versus University of Clemson.

Sometimes you see offers come a little later especially when a player is from another region with no ties to the school. A Clemson offer does have clout now, though. I think you will see this program continue to recruit on a national level. They are one of the nation's hot teams tight now, and the recruiting process at Clemson is as efficient as anyone.

I am cautiously optimistic going into the 2016 season. The emphasis being on the word cautiously. Every year there are too many times where a Championship caliber team gets beat. Just look at the weird games from last year – Michigan St/Michigan to name just one. It’s simply part of the college football drama that makes Saturdays in the fall great. Think about one year ago from now – every expert says Ohio State is a lock as they were loaded to the hilt with talent and a proven championship winning coach. Don’t forget about our own close calls last year that most seem to forget: Louisville was a scary night. The Notre Dame game was the best game I have ever seen in person (albeit I was top row bottom deck and dry), but it started to get uncomfortable in the 4th. That stop in the Florida State game – how would we be talking right now if Bowlware didn’t correctly jump the play and contribute to the key stop? The UNC kickoff offsides mystery penalty. There is a very fine line between making the playoff, and being a great team that had a few bad breaks. I would put our coaching group against anyone as far as preparation and player buy-in is concerned. I am convinced we have the very best in that regard. I wouldn’t change anything about our program right now. Our chances are as good as anyone, but we will need a bounce or two along the way. I know one thing, I am as fired up as ever to find out.

You have me fired up. You hit the nail on the head, though. It is so difficult to win a title. So many things have to go your way. I just think Clemson will be in this national title picture for the foreseeable future.

I am a 40 year donor to Iptay and season ticket holder. I personally think that besides the team the students add more to Death Valley than anything else.

Also, I thought that the students were already charged an activity fee like I was and my son was and my two nephews were when we attended. So really the students are paying to go the games unless something has changed.

I have also been to many of the other venues that you referenced on the show today that charge but also would like to point out that their student bodies are 1 to 2 times larger which does make a difference. But that really is not my point.

Some things at Clemson are not broke and just because new athletic directors have great ideas and vision they should leave some things alone. I think we should understand that we have a pretty good product with our crowd noise and us old iptay guys and the johnny come lately donors and the folks in the boxes are not going to take up the slack.

I do feel for the iptay folks next to the student section and think the students should have assigned seats. Even with block seating in my day the campus groups got a block of tickets but I am pretty sure they were assigned seats that were given to the group members. So this brings me to one more major point. Under a new system I would hate to see all block seating move to the upper deck. I know for a fact that certain groups provide a lot of crowd noise and it would not be as loud in the upper deck.

Another issue that( maybe I am worrying about way too much) is college students have different dates and buddies that they like to sit with on different games unlike us iptay folks who have our same old crowd. Would a new system hurt this flexibility or would it be the same?

So I guess you can say I am just afraid that the new powers at the athletic department may mess things up that work now. In my view, the new ad inherited rather than created what we have now. A great coach and a student body and boosters that were in place long before he arrived.

Just to clear things up. The activity fee at Clemson doesn't go to the athletic department. That is a misunderstanding. Clemson is the only public school in the ACC, SEC or Big 12 not to receive a dime from the students. Virginia receives $13.5 million a year. Clemson is asking for $2 million a year which would be about 23rd or 24th among those 30 schools.

The new proposal is not perfect, but it is better than the old one. I am not sure of all of the particulars yet, but I know they are studying details.

I can assure you the athletic department values the students and doesn't want to take away from their experience.

You make a good point about what was in place, but they are moving forward. The new football operations building is a great example. But at this point, the athletic department doesn't receive a dime from students. South Carolina's athletic department gets $2.5 million from those student fees.

Read your blog "The Gap". I find it hard to believe all the whining about the student fee. Big time athletics costs big time dollars, period. Clemson cannot be caught underfunded, they need to find every revenue stream possible. We need to keep up with the Jonses. Money doesn't buy success, but lack of money is associated with mediocrity. The athletic department needs to find some way to get us up into the 90 million revenue range. It's hard to believe Louisville is up there.

I just hope Dabo , number one, and then Brent Venables, number two, stay here for many years and get whatever they want.....whatever that costs, it's worth it....remember the years of constant criticism of the staff (Hatfield, West, Bowden) and playing in the Music City Bowl? Now that Clemson has arrived we need every facet of the program to be first class, or risk the slide to 8-4 and 7-5 seasons.

Thanks. I agree with you. We have risen to a high level because we invested in the program. I want to continue to do that and understand how important it is to continue to invest. I don't want to go back to those days.

I was disappointed to see Clemson decided to start charging students for football tickets. I think this is a short-sighted mistake, putting priorities in the wrong place. I think Clemson risks alienating a large portion of potential lifelong fans, losing countless dollars in future revenues. I know the athletic program is looking for ways to balance the books but why not solicit the student body to participate in fund raisers or something similar, bringing the students together in support of the athletic programs.

I understand not all students will be charged since free tickets will be available in the upper deck. I expect Clemson will have little trouble selling student season tickets for the hill and lower deck - however that still does not mean the policy change is a good idea. Many students grew up as Clemson fans, attending games with their parents from a young age. They've likely been IPTAY donors for years and have no problem shelling out a little extra for student tickets. This misses the point though because those people were already likely to be Clemson fans for life, meaning their money was already heading to the school for years to come.

For the significant portion of out of state students, their first game as a Clemson freshman may be their first ever game in Death Valley. That was the case for me in 2001. I grew up in Virginia as a Virginia Tech fan, but came to Clemson because it was a better opportunity. I was the first Clemson student in my family and I always assumed I'd pull for the Tigers but stay a bigger VT fan. Then I walked into Death Valley and on to the hill for the first game and the aura of 81K+ orange clad fans overcame me, even before kickoff. From that moment forward I became a life long Clemson fan. I was in the upper deck for one or two games in my four years - being on the hill or in the lower deck for every other game - and the experience is completely different. I am positive I would not have gained the same love of the program and the school from the upper reaches of the upper deck - and as a freshman paying out of state tuition, I would not have had the means to pay for season tickets. My example does not represent everyone, but it represents a significant portion of the Clemson community, particularly as Clemson attracts a student body from a wider national and international footprint as the school's popularity expands through athletics and academics. In the long run, I believe Clemson has more to gain financially through hooking as many students as possible in to the lifelong fan category.

Do you agree with the decision to charge students for tickets and do you think the policy will be reviewed and reversed?

I agree with the new proposed plan. They only have proposals at this point and are still evaluating the decision.

I have a question for your Friday email bag. What changes so far have been made to Clemson special teams?

They worked on special teams more in the spring. They went to live kick coverage. They have changed personnel. They also consulted a couple of outsiders for ideas. I am not sure of what other specifics but do know the staff has talked about the renewed emphasis.

The prayer list is a medium for our community to recognize those that are in need. If you would like to add someone to the list, please email me at [email protected] Please let me know when it is appropriate to remove a person from the list.