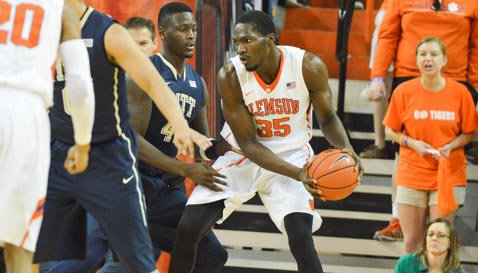 I have waited to write you about this. This year you have written blogs faster about the basketball team after a loss than after a win. But that is not my beef with your perspectives. You can write what you want, but as a voice for WCCP and a voice of Clemson sports, I think you should develop a more educated opinion about basketball

I challenge you to spend as much time on basketball as you do on football or even baseball. I challenge you to delve into basketball recruiting and building the insider relationships with basketball coaches, peers and experts. If you do not want to, then step up and call yourself the typical Clemson basketball fan… big on hopes, overzealous expectations, little on patience… and simply killing time ‘til football starts.

In December and early January, you and cohost erroneously stated on air that losing KJ should not impact this team that much when you look at the momentum of last year. That showed a true lack of understanding of who this team was, what this team had, and overall knowledge about Clemson basketball. Losing KJ was a crater, not a hole, at the beginning of the season. It still is, but the crater is getting somewhat smaller. Besides production, Clemson lost its leader. It took this young team time and failure to determine where leadership would derive from. I heard you both recently speak about what KJ meant and how it impacted the team. Glad to see you both are getting smarter as you watch more Clemson basketball.

The loss to GT was awful because we wanted more. But realistically, it was almost inevitable. Go back and watch this season. Go see where Clemson has followed up one great shooting night with an average or better than average shooting night. It does not happen. Clemson is a below average offensive team. So the outliers of Va Tech and others are actions that will be met with the opposite reaction, i.e. 2nd half of UVA, UNC game and GT game. As fans, we could see what was unfolding in the first 8 minutes of the game. Shots not falling in… layups, jumpers, threes, etc. Coach BB should have seen it earlier and challenged his team get out of the funk of the first half. That was his major shortcoming in my opinion. Also, he waited too late to change up some defenses.

Clemson is not an NCAA team. They have been flirting with being on the bubble. Why? Because Coach BB can squeeze more out of guys than most coaches in ACC. He can get Clemson to surpass and exceed expectations. Things Coach OP could not do. Coach BB does not have the talent that he needs. But Clemson does not OUT TALENT any team in the ACC.

The momentum lost that you wrote about is actually the ebb and flow of Clemson basketball. This team does not have enough talent, yet, to roll with momentum. It is not an excuse. It is not lack of positive Clemson support. It is a realistic outlook about this team at this point in time.

Coach BB’s recruiting salesmanship has been slow to bear fruit. But we have two good players coming in. Current players like Jaron, Roper, Grantham along with the improvement of Landry and even Josh Smith

Josh Smith
Jr. Forward
#33 6-8, 245
Charlotte, NC
View Full Profile gives Clemson something to build on. Austin needs to work to be more consistent. Rooks needs to bulk up. We hope Avery Holmes will impress. Gabe D needs some help as he looks lost. I hope he does not parallel the Milton Jennings

Clemson fans should see a Clemson basketball pointing upward. Why? Because for the first time since Coach BB has been here… he has a foundation that returns. He will have his leading scorer return next year. He will return players who were team leaders in statistical categories. Their development needs to be on becoming the leadership needed for this team.

P.S. To end the season, I will take a stab at forecasting the last games:

3.      Vs NC ST – will be a tough fought game… expect a Clemson win because at home. Scoring will not come easy in first half.

a.      But this is a good test for Coach BB: What can he do to muster his team and make changes as needed during the game?

b.      What we should expect with four days to prepare: Clemson should be a well prepared team to defend ND. Grant should be pressured more and should not be lights out. Our scoring should come from Roper, Rod, Landry, and Jaron with help from Harrison and Grantham. If Clemson can contain Grant & Connaughton and keep Vasturia from raining 3s.. they have a chance. But it is a road game and Senior Night in South Bend… a Clemson win is not likely, possible, but not expected.

5.      ACC final standings - Clemson finishes middle of the ACC pack, a .500 team 9-9 in ACC. Clemson earns #6 seed bc Syracuse is out and some head to head tiebreakers.

6.      ACC Tournament – Clemson wins its first game in ACC. Loses to Duke in Quaterfinals. We all should expect a hard fought, well defended game. Not a blow out.

I spend a percentage of my time on and off of the air based upon what the market dictates. Clemson football is the priority because that is the priority among the fan base.

I follow Clemson basketball recruiting. The problem is there is only a few players each year and Clemson does not recruit at a high level like football. Therefore the fan base doesn't follow it as much.

No one said KJ's departure was no big deal. What we said was that at some point you have to stop blaming it and move on. They did return four other starters.

You called the GT loss almost inevitable. I hate that attitude. I hear it all of the time. I hear excuses. I hate lowering expectations. I think this is an issue. Georgia Tech was not a good team and I had higher expectations. I expect to beat bad teams.

I love Brownell. He is a great guy and a tremendous X and O coach. But Purnell won here and had this team in the ACC finals and NCAA tournament, so it can be done.

In your assessment of the team you talk about the talent issue. Isn't part of the job recruiting?

You said we have two good players coming in. I hope so, but I was told how good Rooks was going to be and how good Devoe was going to be. I have taken a new attitude on recruiting in this sport at Clemson. I will wait until they get here to get excited.

Finally, your assessment of this team is a little more harsh than mine. You seemed to be more critical of the players than I am on the air.

Thanks for the email and your educated opinion.

I certainly hope we are pleasantly surprised by the baseball team later this year.  Unfortunately, the 1-2 start this weekend versus WVU looks too much like last year.  At the same time, I was starting to get my hopes up for Clemson basketball only to have them dashed by a pitiful performance against a lousy Georgia Tech team.  I sure hope Brownell has them puking at practice today after such an embarrassing loss.

As always, I hope Ryan is doing well.

Actually Brownell is giving a few guys a couple of days off. He says this team is tired and needed some rest. Baseball is a different story. The weather this week kept them from practicing as much as they would have liked.

We are one weekend into another baseball season that hopefully will only get better but a few minutes of looking at ACC results tells me otherwise.   Miami is 4-0 and scored an unreal 48 runs, Florida State is 3-0 scoring 27 runs, North Carolina is 3-0 and 26 runs, and UVA is 3-0 having scored 16 runs and that is only four of the teams in the ACC.   The team that scores in baseball wins because you only have so much pitching.

When South Carolina was bombing hit after hit and thrashing Clemson, going to Omaha and winning National Championships, I questioned the strength of our smaller Tigers.   After another losing series with futility in not just scoring but also in any hitting, it is painfully obvious that strength may be one issue for Clemson but not near as much as an apparent continued lack of offensive talent.   Maybe warmer weather and an early spring will bring out a better hitting team and maybe it won't be too late this year.

I keep hoping I am wrong about Clemson baseball. I have lowered my expectations which is something I thought I would never do. I am hopeful this team is much better than I think early in the season.

It is time again for Clemson Athletic Hall of Fame nominations, and I can’t forget an unanswered question…” Why has Lou Cordileone never been selected for the Clemson HOF?” I have nominated him in the past, and I understand that others have, but the selection committee has never elected him. It is hard to understand why Clemson’s only true football All American in a 14 year period is not a hall of famer while many others of that period have been selected. I don’t think many Clemson fans realize that Cordileone is not in the Clemson HOF.

Big Lou was the dominate lineman of the 1959 team that shutout 5 opponents, including 4 ACC teams. His athletic accomplishments in 1959 alone more than qualify him for the HOF: Football All American, Scholastic All American, starred in two bowl games, MVP of the East-West Shrine Game, and starting outfielder on the 1959 CWS baseball team. Us old timers remember him tackling LSU’s Billy Cannon for several losses in the Sugar Bowl and handling the great Bob Lilly in Clemson’s Blue Bonnet Bowl victory later that year. 5 starters on that 1959 football team are now in the Clemson HOF, and all of them certainly deserve the honor. But, the team’s only All American, Lou Cordileone, has not been selected.

Do you have any idea why Cordileone has been snubbed by the selection committee? Could there possibly be personal vendettas by some of the old boys on the committee? Regardless of the reasons, it is way past time for this injustice to be corrected.

I am going to submit my nomination of Lou Cordileone to the HOF selection committee again this year, and I hope other Tiger fans will join with me in this effort to secure his long overdue selection.

Thanks for the email. Cordileone was a great player here, but he was before my time. I never saw him play, but his list of accomplishments appear to be very impressive. Unfortunately, I cannot answer your question.