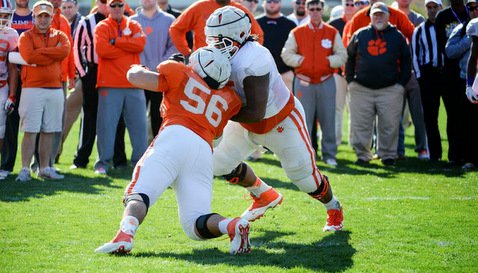 I read your blog today "Big Body." I am pleased that we are finally bringing in young men that can play in the trenches. It seems to me it took Dabo awhile to either truly appreciate the need for linemen or perhaps to simply get positive results from recruiting. We have always had skilled players. It is nice to see a bunch of highly regarded offensive and defensive linemen commit to Clemson.

Dabo has long understood the importance of linemen and the play along the line of scrimmage. He didn't just realize this. Clemson has been involved with some really good line prospects and have gotten a lot of great ones on the defensive line. The offensive line is another issue. They have recruited the top of the line offensive linemen but have not been able to sign them until this year. They have found it much easier selling to the five-star skill players because of success they have had with players like Spiller and Watkins. I think Mitch Hyatt will be one of the players that changes the perception around here. He is one of the most important prospects in recent seasons. He may do for the offensive line what Spiller and Watkins have done for the skill positions.

Dye is still not 100 percent but is getting better. He did have one carry for zero yards against South Carolina but I think it worked out well with Wayne Gallman

Wayne Gallman
RS Fr. Running Back
#9 6-1, 209
Loganville, GA
View Full Profile . Remember a few years ago when Reggie Merriweather had the hot hand but was taken out of the USC game? Did you really want to see Dye or did Gallman's 191 yards do the trick?

I hope you and family have a great Christmas.   As you may remember, over the past two or three years, I have questioned the style of basketball that is played at Clemson and have to believe it has finally caught up with our Tigers.    This game of basketball today is about dominating size and 3 point shooting and Clemson has neither.   The task is tall at Clemson and I do not envy any coach that tries to turn the program around but if I was a player that was a great shooter, would I want to go to a school that lives and dies on defense?   Unfortunately, as the next month or so goes by and certainly when the ACC tournament comes around and Clemson is at the bottom of the league I am afraid that question will be answered and we will not like that answer.    Speed kills in football and defense is important in basketball but not without the shooters that fire the fatal bullets.

I keep waiting for the experience of the upperclassmen to take over and this team to execute better. I don't think size is the issue. Clemson has size. Shooting is a big issue but athletic ability and quickness a guard s a major issue too. Last year this team won with effort and toughness. That will need to resurface soon.

Brownell needs to recruit shooters. Tired of watching line drives that carom off the backboard and lay-ups that hit the bottom of the rim. Even missed dunks. Athletes that can run and jump might be great for defense but somebody still has to put the ball in the hole! Short guys driving the lane with 3 tall defenders waiting is bad coaching. He got lucky with an NBA quality player last year but does anybody really believe that this team is better than when he got here.

Shooting is an issue but there are many issues. I watch a lot of teams shoot the ball poorly. College basketball is full of bad shooters. Clemson has issues but can overcome some of them by playing better defense and playing smarter and playing harder.