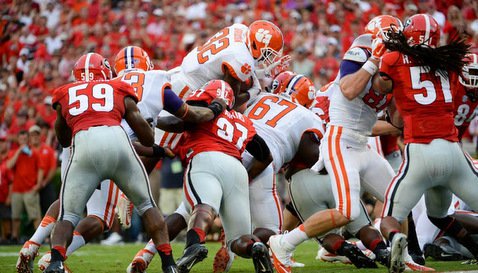 On tigernet there is a video post from ESPN about analysts breaking down what Clemson has to left to play for.... their conclusions when looking at the big picture was..... nothing. No playoffs, no ACC title. Ouch. Then they go on to say that we still have the SC game and a bowl game (hopefully orange). They also noted that we are now playing for next year.

Your thoughts on this? Personally I think most fans would be content with 11 wins, beating USC and a good bowl game win. Losing the big goals early in the season is hard to swallow now but most other teams will be there soon enough.

I disagree with the analyst and agree with you. This team can still win a bunch of football games and can climb in the rankings each week. This program has a lot to play for. If ESPN feels that way tell them to not show up Saturday night and we won't have to worry about TV timeouts.

Hey Mickey, shows been great. Tough loss for these guys. Had so many chances to put this game to bed just couldn't capitalize. Just have a few questions for you.

Who do you recall being the last Clemson player if any to have played both sides of the ball an what position?

I know this is WAY early but Lets say D Watson breaks Steve Fullers records do they replace him with DWs name being under the 4 or do you think there's a little spot on there that says you can wear my # but stay away from the records?

Ok got a change in game play here. Clemson has the ball at the 1/2 or 1 yard line an say they pull DW since his under center exchange isn't good an put cole in under center an he pushes it in with a qb sneak an if the game don't change an Clemson gets the pick by Jadar an if im not mistaken theres like a min 40 seconds or so left on the clock an Clemson takes a knee to end it. Being what DW did through out the game, where are we at Monday with the QB talk?

Thanks Mickey have a good one.

There have been situational guys play both ways. The last I can remember doing it was Justin Miller

I hope Watson breaks every record too. My guess is they can have plenty of room to honor him when it comes that time too.

In your sneak scenario I don't think it changes anything. You wouldn't change the offense based upon a QB sneak.

Thanks for what you do and your time. I was traveling over the weekend of the FSU game but I was thankfully able to stream the radio broadcast over the internet. I must report the radio broadcast was poorly executed. The play by play reporting was lacking in a way that I could sense what happened (via crowd noise reaction) before the play by play announcer caught up to the action. I am aware of recent changes in the broadcast booth, however I must say over the years I have listened to Tiger football games on the radio, I do not recall a radio broadcast so poorly executed. I wonder if anyone else heard the broadcast?

I was in Tallahassee and didn't hear the broadcast. In fact, I have been to every game and have yet to hear any broadcast, so I am not a good one to judge it. Sorry.

What has happened that Tyrone Crowder

Tyrone Crowder
RS Fr. Offensive Guard
#55 6-2, 322
Marston, NC
View Full Profile is not playing? I thought he was suppose to be a beast. With the trouble the OL is having I thought he should be playing.

I think Crowder looked good until the final week or so of fall camp. He is only a red-shirt freshman and the staff thinks he will be a big part of the future plans along the line in the near future.

The game just ended. My observation is that once again Morris blows it with lousy play calls.

I didn't see it that way. I was in Tallahassee and didn't feel that way there and have watched the game game on tape three times and still don't feel that way. Every game can be analyzed after the fact and not every call is a great call. However, I thought Morris did a nice job once again. The game was lost on huge mistakes not play calling.

I am tired of the "clemsoning" term used by ESPN bloggers.  I suggest we let them know it has got to stop.  I would propose no links on our websites to ESPN stories.  No interviews from coaches or players to ESPN employees.  And if by some chance USC wins out and we win out, the University politely decline "Game Day", unless ESPN bloggers apologize and they vow to keep the term off their blogs.  The last time I checked 50% of the college football teams did not win the last game they played.  For Heather Dinich to redefine "clemsoning" as losing a game that you're projected to lose against the Number 1 team in the country is disgusting to me.  The purpose of a blogger is to generate support for a blog.  To disenfranchise a large group of your readers for no reason is an epic failure.  I haven't been back to ESPN's site since reading that blog.  And I think Clemson fans should join me in that boycott.

Like you, I thought the article was off. ESPN is so powerful that I will still watch it and read their stuff but I also take what many of their people say and write with a grain of salt. There are enough talented Clemson broadcasters and writers out there so I don't have to depend on ESPN for my Clemson fill.

Long time listener.  Love your work and have for years.  Don't get to listen nearly as often as I would like but l listen to you whenever I can.

I think the world of Coach Swinney and his staff.  No one is perfect though and I am a real believer in good defense.  Things are good but I am extremely concerned about one position on the field and that is Defensive Tackle.  Defensive Tackle (DT) is where it all starts for me.  Although I maybe prejudiced personally I don't think there is not a better Defensive Line Coach that Dan Brooks

Dan Brooks
Assoc. Head Coach / Def. Tackles
View Full Profile .  Considering where most of our DT starters were ranked prior to enrollment at Clemson I think he is a genius.

I know you keep a roster ( see Tigernet.com Scholarship list) and I see that this year we lose 3 pretty good DTs.  Right now with 2 commitments we will only have six or seven if you add Kevin Dodd

Kevin Dodd
RS So. Defensive End
#98 6-5, 275
Taylors, SC
View Full Profile in (as Tigernet does on their scholarship list) who up until has been a Defensive End, next year.  This is not enough.

I checked Florida State's roster and they have now 11 DTs on their roster and I don't think that any are seniors this year.

We seem to lose a great Defensive Tackle prospect every year to some other school that we really need.  Although I am not sure Eddie Goldman was ever seriously going to come to Clemson it would have been real nice to have him, particularly considering how he blew us up at critical points in the game.    The Adams kid who went to Auburn last year I believe was down to us and Auburn.  He looked great against Kansas State and appeared to be a difference maker.  We seemed to be the second choice for the difference makers at DT.  Frankly if we had just one or two like those we would be unbelievable on Defense.   We develop players well but to get to the top we need those that are ready to go now.  Jabril Robinson

Jabril Robinson
Fr. Defensive Tackle
#96 6-2, 255
Leland, NC
View Full Profile will not be ready next year in my opinion.  This is the only area or position I give our staff a D on in recruiting.

I know that we are trying to leave room for Albert Huggins or Tim Settle or someone else to bring in at DT .  We need someone who is 300lbs.+ or so that can play next year.   It is getting late and I am worried but I think I am right in regard to this discussion.  Please tell me I right or wrong and alleviate my fears or explain to me where I am wrong or what we need to do to fix this perceived and I think real problem.

You are right in your assessment of the importance of the position. Clemson does lose three good ones this year. I am comfortable moving forward with Carlos Watkins

Rennie Moore
Defensive Tackle (2007 - 2011)
#94 6-3, 265
Saint Marys, GA
View Full Profile . But like you I would like to have one more in the upcoming class. Huggins is the main target. he is the best player in South Carolina. Clemson will no longer recruit Settle.

Hi Mickey...Hope you're doing well. Why is it seemingly so difficult for Dabo to just admit that the team lost a game. Sure, we played well against UGA and FSU; no doubt about it. But we obviously didn't play well enough to win, which means the other teams did. Rather than trot out the "We beat ourselves" and "We're 0-2 against Clemson," why not just say "We played well but it wasn't enough to win" and move on.

I know he is the eternal optimist, and I appreciate that. But there's no shame in admitting we lost a game...will learn from it...and be better the next time around.

First, Dabo is an optimist. I like his optimistic outlook. Second, he is right. Clemson beat its self Saturday night. It was Clemson's mistakes that lost the game. I don;t see how anyone that watched the game could see it any other way.