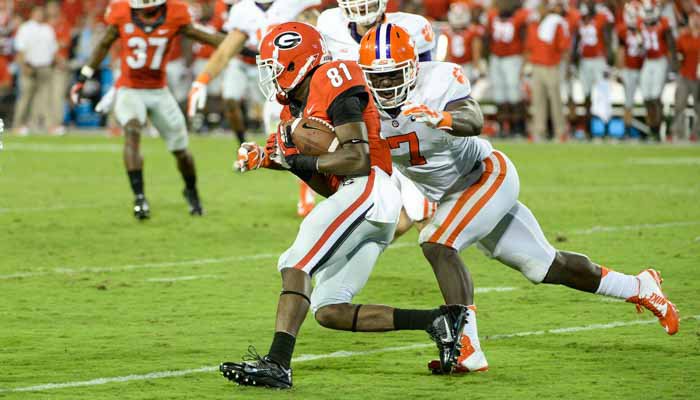 I'm struggling here to see the whole picture around this 4th qt bomb sat night. I felt like there's a lot of problems going on with this team. Maybe it was hype, lack of exp, idk something. Why is it coaches are more into playing the man that's served his time rather than the man that's young but gives you more of a threat. I mean RB is not looking good. I think there gonna have the run more with the QBs an Cole has to stop sliding when there's prob 2 or 3 more yards there he may could get. Guess I'm just still trying to swallow this loss. It Prob coulda been worse if uga wouldn't had loss so much to injuries or susp. I don't think they had better players than Clemson just wanted it more I wish Clemson would had took more shots downfield. It almost looked like no plays we've seen in the past was ran. Seems they knew every play. Hope this wkend is a better putting.

A major factor Saturday night was field position. The offense was backed up the entire second half and with some inexperience at several positions they did not want to make a major mistake or turnover deep in their own territory. The strategy worked in that the Tigers were in a close game late because the defense kept UGA out of the endzone in the third quarter. However, Georgia's running back talent and depth took over.

Early in the season most staffs play their experience. I think you will see some of the young guys getting more time starting this week.

I do think Georgia had the best players and they were at home. Their running back talent is elite.

What is a wedge on a football return, and did UGA have a wedge on the touchdown return?  Also, why is it not mandatory for all Clemson return men to down the ball on kickoffs when it goes in the endzone since we don't have anyone on the roster that is a threat to score a touchdown.  If fact, we rarely get the ball to the 25.  Finally, UGA has at least 4 guys that can take it to the house at running back or in the return game.  Do we have anyone on the roster that is that type of threat?

The NCAA rules say you can't have more that two guys within two yards of each other on a kickoff return. When more than two get bunched up it creates a wedge which is illegal but was nit called.

Clemson doesn't have the playmakers that Georgia has. This Clemson team lacks big play capability at this point.

I think we should start Watson. We should have left him in the game after his first drive. He took us down the field scored a touchdown and boosted his confidence. We don't have a solid RB. We need a dual threat QB like Watson to keep the defense guessing. I believe if we would have kept Watson in the whole game we could've won. Do you agree?

I could not believe Watson did not go back in after his touchdown drive. That one baffled me. I agree with you that the zone read offense is one thing that could provide relief in the running game and Watson gives you that.

Sometime this week PLEASE bring the moron side of our fan base some perspective and let it be known that who plays QB is not entirely relevant this coming week. That position and any possible issues surrounding Stoudt are about 5th or 6th down the list of things to work on or fix. Watson may bring some energy or even a little running ability, but those attributes will not be nearly enough to mask a poor O-line, poor special teams, and bad tackling by our defense. And the QB certainly won't add 15 lbs of muscle and or blazing speed to any of our current RBs.

Amazing fact (can't recall where I heard this): the better team on any given night usually wins, and sometimes going away.

Clemson's biggest issue is placekicker. I am not sure about that one right now. They also have issues at running back but hopefully some changes will come there. They need to play the young wide outs more and they need a new punt returner. But you are right the better team won Saturday.

Saturday night in Athens was disappointing. I have been a Clemson fan for 54 years and I have been down this road before. Many of us have strong bonds to Clemson and with those bonds come highs and lows. The highs are exhilarating and the lows are depressing. I became a real fan when I was10 years old. My fifth grade teacher was the wife of Lowndes Shingler. My family started attending games that year and we never looked back. It has always been Clemson. While my degrees did not come from Clemson, I have two daughters who earned their undergraduate degrees from Clemson. Even though they were raised in Vermont, they were determined to be Clemson Tigers. My sister earned a degree from Clemson as did my brother-in-law. While my wife graduated from Winthrop, her three siblings earned their undergraduate degrees from Clemson. Even though we lived in Virginia at the time, we made it to every home game during the 1981 Championship year. We were at the heart stopping game at Kenan Memorial Stadium when Clemson won 10-8 that year. What a game. Our oldest daughter was three at the time and the Tiger (Zach Mills) took her from my arms and carried out on the field before the game. We were there in 1982 when Clemson started the season by loosing to Georgia and tying Boston College. I actually developed a relationship with Andy Headen and remember telling him that the team will be alright after the Boston College game and that I knew the Clemson nation was behind them. I have lived in Vermont since 1985 but I am still able to make it down for an occasional game. I have not missed a game at Boston College.

So why am I writing this? Yes, Saturday was disappointing. There will be fans second guessing the coaches and judging the players. Some fans will feel that the team let them down. Well, I am here now to say, "That is selfish thinking." As far as I am concern, it is and has always been about those young men playing the game (I am the father of grown children so, to me, these young men are still children.) Many of these young men come from unbelievably difficult situations. Football is their ticket out. From everything I see and read, Dabo and his staff are guiding these young men into becoming fine and honorable adults.

As I stated to Andy Headen in 1982, this team will be OK and I am confident that, in the end, we will look back on another strong season. Just like we did in 1982. That team went on to win the remainder of their games. I invite everyone to remember that these are young men competing on the playing field and performing in class. They are doing a pretty good job at both. My pride in them will not be diminished by one bad night on the playing surface.

A Clemson Fan living in Vermont,

Thanks for the email. Like you I think there will be a lot of positives in this season. I really look forward to seeing this team progress after the trip to Tallahassee.

Another thumping between the hedges that I hope will somehow help down the road but the light in the tunnel is pretty dim 30 minutes after the game.   Some observations, as he was last year, Todd Gurley was the best player on the field without a doubt.   The team that wins the line of scrimmage usually wins the game.   Any of the 4 Georgia tailbacks could start at Clemson and the running game is not good at Clemson.   Thank goodness Mike Bobo did not run the pitch sweep with 3 pulling linemen and a crack back block by a wide receiver every play or the game would have never ended.   Georgia totally out manned, out played, out everything they did tonight.    I hope things get better because it could be along year.

Gurley may be the best player in the country. Georgia won on both lines of scrimmage. Georgia's backs are the best in the country and the Bulldogs look like an elite team at this point. Hopefully this season has a brighter outlook than the one we saw in the second half.

Now with week 1 in the books, I have some question to ask.... WHY and I mean WHY is Howard still starting ??? I mean he is playing like he is scare to hit the hole and Davidson look a lot better then he did ? Do you think with Brooks going down that they will try to bring Dye back sooner, what is his status ?? I know that a lot of other Tiger fans are still upset with the loss to UGA and I am too... But the Score made the game look worst than it ready was........ with that being said what do you think needs to change with are O-line ??? ( note this is the reason we couldn't move the ball in the second half)... I still think that we can beat FSU because I think that Jeremy Pruitt  as a D-Coordinator makes that big of a difference. What do you think ?  Now with the news of Kyrin Priester

Kyrin Priester
Wide Receiver (2014)
#17 6-1, 186
Lilburn, GA
View Full Profile dismissal, first I sad to see him leave and wish that  he had another chance to get back on the team. But what do you think really happen and how does it affect the depth cart? and what is the deal with Shaq Anthony

Shaq Anthony
Offensive Tackle (2011 - 2014)
#76 6-4, 276
Williamston, SC
View Full Profile waiting to transfer right at the beginning of the season ?  Do you think we will add another WR for this recruiting cycle ?  Lastly  I read about the update to Death Valley how does one send messages to the new fans center ?

I think we will see more running backs this week, Howard is just not very productive. I am not optimistic about Dye. He did not look close when camp opened. I think Jay Guillermo

Jay Guillermo
RS So. Center
#57 6-3, 314
Maryville, TN
View Full Profile should get more snaps. Also I think Beasley will make a difference. I am no sure Clemson can beat the nation's number one team on the road. Priester was being insubordinate. He had an awful attitude and it was a cancer. Anthony got suspended again and was not going to play. Clemson probably won't sign another receiver this year but may add an additional wide out in 2016. clemsontigers.com has info on the new committee. Hope this helps.