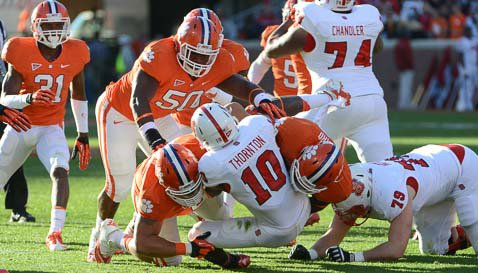 Happy New Year! I hope you and Ryan had a wonderful time together over the holidays.

I am hopeful the bowl win is a sign that Clemson is, in fact, a "sign of a building powerhouse." Yet, I am hopeful that another sign of Clemson football becoming a powerhouse will be winning the state championship each year. The current streak is just beyond my comprehension. The 2012 Orange Bowl loss and the losing streak to South Carolina are the two most glaring deficiencies for Dabo Swinney

Like you, I am hopeful that the Ohio State victory is another springboard type of win. Hopefully this is another step towards more national appeal. And I know Clemson fans are feed up with the South Carolina series. Believe me, the staff feels the same way.

Did not get a chance to listen to your show today but wanted to let you know that in over 60 years of watching college football games I have never seen a worse officiated game, bar none. I wrote a letter to the Commissioner of the AAC suggesting that for the integrity of college football and his conference those officials should be investigated personally and financially because of the extent to which they overstepped their officiating bounds. I am not talking about judgment calls--PI, man in motion, etc. I am talking about penalties assessed against the Tigers that if true, I have NEVER seen enforced. Add that to ;pictures I saw of clear, unmitigated holding by their OL in many, many situations with nothing being called leads me to believe that the "fix" could have been on. They did everything to enable OSU to stay in contention and possibly win that

game. No I am not paranoid but I have coached and witnessed athletics at a

very high level and truly believe that something was amiss and the answer needs to be determined through the investigatory process .and if necessary charges filed. At a minimum they should never work any other games anyplace, anytime. Fortunately, we won in spite of their effort but candidly it does make me and others question the integrity of the game when I saw that. There is a lot of money at stake and I'm sure I don't need to tell you that this fact can lead people to do some "strange things". Hope all is well with you and yours

The officiating on the field was awful but I will add another element. Several people who were on the sidelines told me that they have never heard a less professional crew in the way that they spoke to the Clemson staff. They were combative and completely unprofessional according to my sources. I would guess that the athletic department has addressed this with the AAC.

Now that Tajh and Sammy are headed off the NFL,  give me your opinion of who are the top 5 Clemson football players all time?

Great question. I have said before that I think Tajh will go down as the greatest quarterback in school history. At this point I am torn between Nuk Hopkins and Sammy Watkins

Sammy Watkins
Jr. Wide Receiver
#2 6-1, 205
Fort Myers, FL
View Full Profile for the greatest receiver. Had either stayed for their senior seasons it would have helped their cause. As far as the top players overall, it is difficult to compare different positions and different eras. With that said, I did not see Banks McFadden play but others in the conversation would include Terry Kinard, Jeff Davis, C.J. Spiller

First thing first, it great to a Tiger…… Unlike most of the other Clemson fans I loved the fact that we finally broke out the all purple uniform again but it would of be better if the game was on TV.. Second It was very nice to see them team don the switch at the Orange bowl!! But I read the article on Tigernet that talked about Why Dabo did it, so I have to ask did he not feel that Both this year and last year’s game vs FSU and SC we not big game ?? I mean but times the games were at home were Solid orange week.   Next I want to ask about the Guys that are leaving early Where did that grade out when they did the paperwork for the draft and where do you think they are going to get drafted? I want to wish them luck! I know that all of us fans wanted Bryant, Breeland, and Vic to stay.. But where do you this that leaves the WR, DE, and CB now? (What is the two deep)  as well as the LB’s ? Do you have any updates on Dye and Pagano? What’s the updates in the recruiting due to the earlier departures?

I like all of the uniforms combinations and love the uniform talk. However, I think it is more for the fans than the players and staff. I doubt the uniforms had anything to do with the outcome of any games this season.

The NFL grades are private and sometimes the players tell what they were and others don't. Sammy Watkins and Martavis Bryant

Martavis Bryant
Jr. Wide Receiver
#1 6-5, 200
Calhoun Falls, SC
View Full Profile did even submit their request because both knew they were not coming back. I heard Vic Beasley

Vic Beasley
RS Jr. Defensive End
#3 6-3, 225
Adairsville, GA
View Full Profile received a second round grade. I am not sure on Bashaud Breeland

Bashaud Breeland
RS Jr. Cornerback
#17 6-0, 195
Allendale, SC
View Full Profile . The evaluation process for the NFL is just now starting and the players have the combine, interviews and individual workouts to improve their stock. At this point I would guess that Watkins is a top 10 pick. I think Beasley is a boarder line first or second round selection. Bryant is hard to project but my guess is he moves up into the third or fourth round after a good combine. I think Breeland is a fourth to sixth round pick a this point but again all of this could change.

Heading into the spring I have a tentative depth chart that looks like this at those positions:

However, I think Artavis Scott will make a move up the depth chart this spring.

Tyshon Dye
Fr. Running Back
#23 6-1, 205
Elberton, GA
View Full Profile has not done a lot yet but he is moving around a little better and barring any setback, is on schedule to be ready by the fall. Pagano is set to be ready for the spring.

I doubt the early departures will have a huge effect in the class of 2014. They could have a bigger impact next year. One player that we may see it have an impact on is Andrew Williams, a defensive end from Atlanta. Williams may see an opportunity to play right away at Clemson when Beasley announces.

Hey Mickey, great work as usual. I totally agree about the SEC bandwagon. Such a joke. Even teams that just joined the conference are suddenly superior to all others "Oh he has that SEC speed". It's usually from my friends that pull for inferior SEC teams like Kentucky etc. so stupid. But I digress.

My question is about why, when we win the coin toss, we don't defer to the 2nd half? I understand the thinking since our offense is so good, but there has to be some statistical data that shows which decision actually results in more possessions and/or more points and wins. It seems that getting the ball first in the second half is more valuable than at the start if the game, specially if you have it on the last possession of the first half as well. Maybe we are the only ones that have looked at the stats but I doubt it. Every other team seems to defer when they win the toss. What do you think?

I totally agree with you. I have been on this for a while now. We saw this season where Florida State on several occasions scored to end the first half and got the ball to start the second half. A 14-point swing can be devastating. Plus getting the ball to start the second half gives you hope and a chance to make halftime adjustments felt immediately. They say that the most important time in a football game is first five minutes of the first half and it is nice to start that period on offense.

Mickey, I think we will be better next year. Here are the reasons. The defense will be better. If Beasley comes back, the defensive line will be amazing. With Anthony, Blanks and Kearse, and Alexander we will be a very good defensive team. Offense will be different, but has the potential to be better. Very solid running backs and a good core group of receivers. The line should be about the same. This year we relied on key players and many times Tajh made some bad decisions when trying to do too much. Next year there isn't a dominate player, so everyone will have to contribute. If Leggett gets his head on right, we will have the TE we sorely missed this year. Regardless of who is the QB, this will need to be more of a team effort than ever before.

I think the defense will be better but the early departures mean the Tigers have depth issues at defensive end and corner. I do think the defensive tackles will be as deep and talented as they have been in a long time. Stephone Anthony

Stephone Anthony
Jr. Linebacker
#42 6-2, 235
Polkton, NC
View Full Profile 's return is a key. I also expect to see some of the young players in the secondary make a difference. I don't think we will see a huge drop off on offense but there is no way to believe the offense will be better. You can't lose players like Boyd, Watkins, Bryant, Thomas, Shatley and McDowell and be better on offense.

Love your blog.  It’s hard to get Clemson information over here in the heart of SEC country and your blog gives the best info around.  I do have a question about this year’s recruit class.  Now that we know better who is leaving early, how many scholarships will be available?

That number is fluid because of the number of walk-ons that are added each year but I count 67 players coming back from last season and 18 current commitments. That would give Clemson 85, so any player signed on top of that would mean an over sign. Remember though that there is always attrition throughout the year.