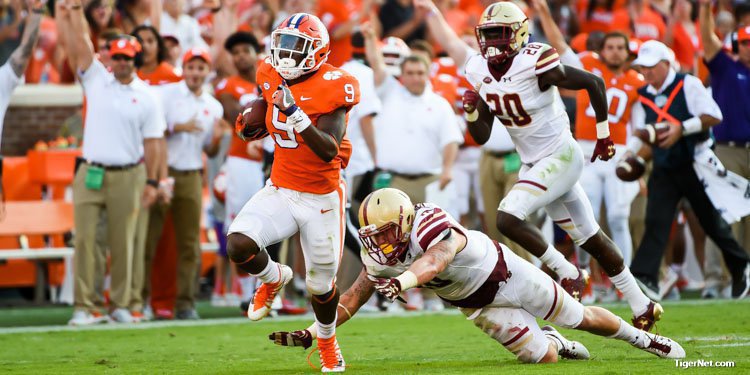 In many ways, it felt so good to see Clemson look so physically dominating against Florida State Saturday afternoon. At times I wanted to forget this was a 3-5 Seminole team. I just wanted to sit back and enjoy Clemson beating a team with those uniforms, those helmets, that coaching staff and that fight song.

There were only three things that bothered me when I started to realize this Nole team is a mere nub of itself. First was the lack of ability to put an opponent away. Clemson had a 17-0 lead and had held FSU to 46 yards in the first half. However, the Tigers later found themselves giving the Seminoles a chance late in the game.

I also get a little frustrated with some of the offense. Two fumbles inside the five-yard line hurt. The play call selection can be questionable. Etienne’s role can be questioned. The passing game can be lacking. Dropped balls hurt. But this game should have been over at the half.

Finally injuries have been maddening. On the defensive side of the ball, I looked out one play and saw Mullen, O’Daniel, and Smith as the only three regular starters on the field.

FSU’s offensive line and lack of experience at quarterback make them fairly easy to defend. Clemson held the Noles to 12 first downs, 229 yards and 3 of 15 on third and fourth downs. The Seminoles were gifted their first touchdown with a couple of Clemson penalties. Their second score came on a brilliant trick play call. Outside of that, FSU did very little. Clemson did a nice job on Cam Akers holding him to 40 yards on 12 carries.

The passing game was hampered with a couple of key drops and a few bad decisions or bad throws from Bryant. A few negative yardage plays also put the Tigers behind the chains.

However, the offensive fumbles hurt more than anything else. Clemson left 11 points on the field with two of the fumbles and the final one gave FSU a chance.

It was great to win the game and clinch the division, especially against the Seminoles. I will never take winning for granted and will always cherish trophies and championships.

This Clemson team is not elite. However, neither is Alabama, Georgia, Notre Dame, Oklahoma, Wisconsin, Miami, TCU, etc. I think we got spoiled with the 2015 and 2016 Clemson and Alabama teams. Those were elite teams. This year you don’t have to be elite, all you have to be is better than the others competing for a national title.

Second, the offense will need to clean up the passing game. Bryant has to make better decisions and better throws. Deon Cain and the wide outs will have to catch the football more consistently.

Finally, Travis Etienne can be the difference between winning the conference title and more. He is explosive and stronger than defenses realize. He can be the explosive player on offense that can change field position and change games.

We are lucky to be in this position again. Clemson’s Atlantic Division title gives this team a shot at so much more. This has been and continue to be very fun.