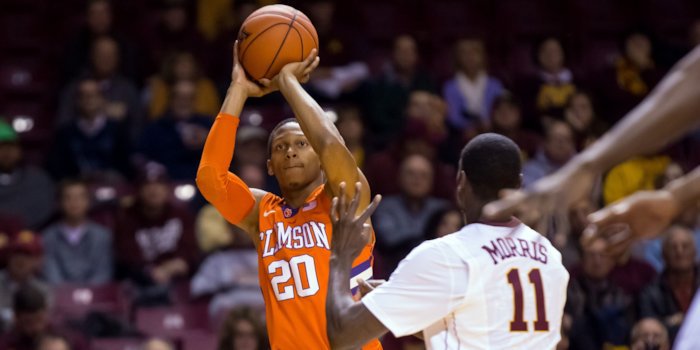 When the Tigers were winning close games earlier in conference play, it put Clemson in the NCAA tournament picture. Now that the close losses have mounted late in the conference schedule, those dreams are gone.

Tuesday night's 75-73 loss to Georgia Tech in Atlanta was a dagger to the NCAA tournament hopes for Clemson. It was another missed opportunity.

Clemson wasted another great performance from Jaron Blossomgame, who had 22 points.

They wasted another opportunity partly because they got dominated on the boards again, 31-23.

Another storyline was Jordan Roper, who went 0-6 from the field including 0-3 from three and was shutout of the scoring column, despite playing 40 minutes.

Tech shot 54% from the field as their backcourt went off in the second half. Adam Smith had 20 points, and Georges-Hunt scored 25. The duo went 5-9 from three in torching the Tiger defense.

A major storyline continued with Landry Nnoko playing only 19 minutes due to more foul trouble. Clemson had 17 fouls to Tech's 11, which helped Tech to go 14-15 from the free throw line. The Tigers took only five free throws the entire game.

The loss hurts in several ways. It all but eliminates Clemson from the NCAA tournament talk. It also moved the Tigers ACC record to 9-7 and made it terribly difficult for the Tigers to finish in the top four of the league which would have given Clemson two byes in the ACC tournament.