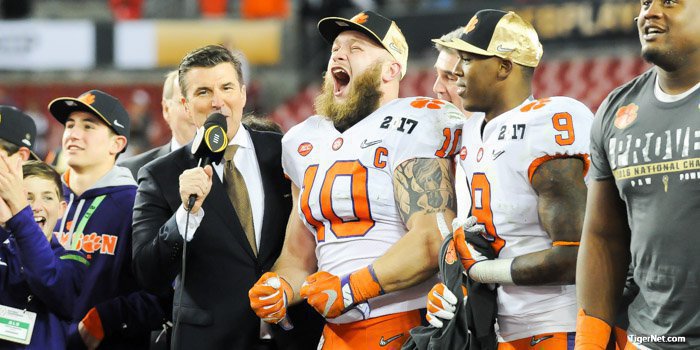 Davis helped the Tigers to the national title in 1981 when he was a first-team All-American. That season he was the ACC Player of the Year. That season he recorded 175 tackles. Davis is third in Clemson career tackles with 469 tackles. He was an ACC 50 Year Selection.

McDaniel had the rare feat of having at least 100 tackles in three of his four years. He was a first-team All-American in 1991. He was an All-ACC choice in 1990 and 1991. McDaniel and Jeff Davis set the Clemson record with ten caused fumbles. His 389 tackles are sixth in Clemson history.

Hill was the 2004 ACC Defensive Player of the Year and was an All-American that same season. He was selected to the All-ACC team in 2003 and 2004. His 27 tackles for a loss in 2003 were the second most in a single season.

Brown started 42 games at linebacker, which is a Clemson record. His 515 tackles are the most by any player in a Clemson career. He set the school record for tackles in a single season with 170, but that record was broken by Jeff Davis, then Anthony Simmons and finally Keith Adams. He was All-ACC in 1978 and 1979.

Scott is eighth in Clemson history with 382 career tackles. From 1976-78 he teamed with Bubba Brown to give the Tigers one of the finest combinations of linebackers in school history. He was selected All-ACC in 1977 and 1978.

Boulware is another of the most popular players in school history. He helped lead the Tigers to their second national title in 2016. Boulware was an All-American last season. He was the 2016 ACC Defensive Player of the Year. He recorded 138 tackles as a junior and 131 as a senior. Boulware was All-ACC in 2015 and 2016.