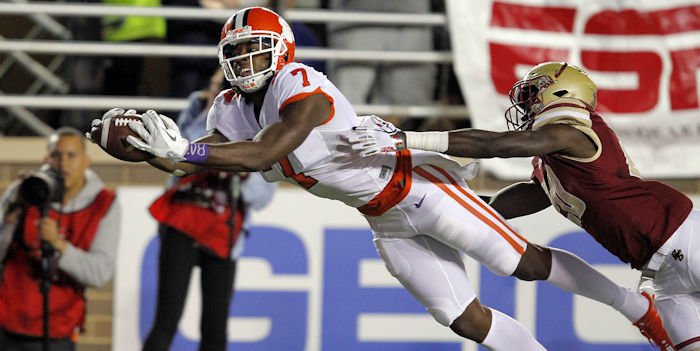 Credit the staff and players because the Tigers had no hangover from the emotional win over Louisville with a convincing 56-10 win at Boston College Friday.

We probably shouldn't have doubted this team and staff. Dabo gets his teams ready to play. Clemson has now defeated 42 unranked opponents in a row, the second-longest streak in the nation behind only Alabama. Also, Clemson has now won its last eight road games, tying the school record set in 1978 and 1979.

Big plays were the story in this one. Clemson had three plays of 50+ yards in the first quarter after entering the contest with none through five games this season.

Boston College was a highly ranked defense coming in, but the big plays proved to be demoralizing for the Eagles.

Deshaun Watson was efficient by going 14 of 24 for 266 yards with four touchdowns and no interceptions.

The Tigers spread the ball around through the air. Deon Cain had three receptions for 68 yards and a couple of scores to complement Williams and Leggett's touchdowns.

Clemson doubled up BC in total yardage, 503-251. The defense played well including a couple of nice goal line stands. To be fair, it's not like BC is a difficult offense to stop, but after playing 99 plays last week, it was nice to see the defense come out and dominate.

Clemson played 67 players in this blowout. It was nice to see so many fresh faces get game experience and continue to build depth.

The negatives were few and far between. Perhaps the biggest was Ray Ray McCloud's muffled punt that set up the Eagles for their first score.

So Clemson put BC away with three first-quarter touchdowns and never looked back. This was another successful trip to BC and puts Clemson in great shape at 6-0 heading into the final game before the open date.