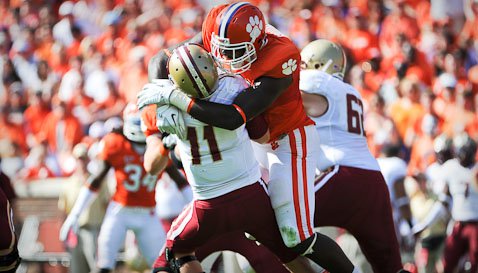 Boston College comes to town this weekend to face Clemson at 3:30 in Death Valley.  There was a time, when the Eagles entered the ACC, that this game was a big one.  Instead, the Eagles have their fourth coach in eight years.

Tom O'Brien had a nice run in Chestnut Hill.  In 10 years he went 75-45 and took the Eagles to bowl games in his last six seasons.  O'Brien's teams won 28 games his last three years and won six straight bowl games.  He shocked Boston College when he left for NC State.

The Eagles made a good hire in offensive-minded Jeff Jagodzinski, who went 20-8 and won the Atlantic division in both years he was the head coach.  But the Eagles panicked when Jagodzinski looked at a few other jobs, including an NFL job, and he was fired.

Frank Spaziani took over and his four years in Beantown started the decline of the program.  The Eagles went 22-29 under Spaz, including 6-18 the last two seasons.

So Boston College turned to Steve Addazio, a good recruiter who has brought energy to the program.

When BC came into the conference they had NFL linemen on both sides of the ball and were known as a physical group.  They have lost their identity, but Addazio wants to brand his program with that toughness once again.

He has built this team around four senior starters.  Andre Williams is a 227-pound tailback that leads the country in rushing with 768 yards and seven touchdowns on 133 carries.  Williams has over 100 yards in every game this year with the exception of the trip to Southern Cal.  He had 204 yards in a 24-10 win over Wake Forest and 149 against a good defense in Florida State.  Last week against Army Williams had 263 yards and five touchdowns.  Clemson held Williams to 61 yards rushing a season ago.

The senior quarterback is Chase Rettig, who has started 26 games in his career.  This season he has completed 71 of 110 passes for 891 yards and nine touchdowns.  Last season he threw for over 3,000 yards and 17 touchdowns.

Rettig's favorite target is senior Alex Amidon, who caught 78 passes last season and has 32 receptions this year for 476 yards and two scores.  Last year against Clemson, Amidon had eight catches for 193 yards and two touchdowns.

Here is a look at BC's offensive numbers:

The defense is led by senior linebacker Kevin Pierre-Louis.  The senior strongside linebacker had a career-high 18 tackles, 10 solos against Army.  It was Pierre-Louis’ third 10-plus tackle game of the season and the 13th of his career.  Pierre-Louis leads the ACC in solo tackles with 28 and is second in the conference in total tackles with 50.

Here is a look at Boston College's Defensive numbers:

Boston College is a better football team than everyone Clemson has faced this season except Georgia.  The Eagles will be physical.  They will run the ball.  They are very experienced with 18 returning starters including 10 on defense.  They have very good seniors who have played key roles over the past three seasons.

Clemson will be tested Saturday but the Tigers are the better team.  I am convinced the Tigers will not be looking ahead to Florida State and I expect Clemson to handle BC Saturday.  This win would set up one of the biggest games ever played in Death Valley.