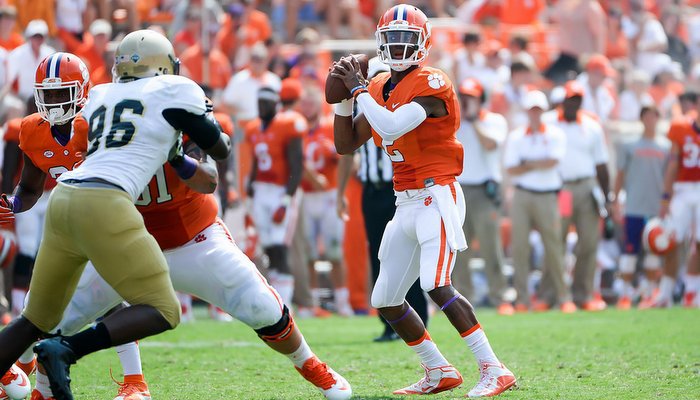 Monday is the start of spring practice, and I wanted to take a look at the quarterback position to preview some storylines for the spring.

It's not like Brandon Streeter is going to give Deshaun Watson the spring off. Watson still has areas where he needs to improve, but this is not a crucial spring for Watson. This will be a time for polishing up and getting better footwork, but this will not be a make or break spring for the Heisman Trophy finalist.

This is a huge spring for Kelly Bryant. At the end of his true freshman season last year, Bryant had won the backup spot by outplaying Nick Schuessler. Bryant is the best athlete of the bunch and has some of the best running skills of anyone at any position on this team. However, he has so much to improve upon. Even in the run game, Kelly needs work. He needs to work on his ball security and his understanding of the running game.

In terms of his passing, Bryant has made big strides but will continue to work on his accuracy. He also needs improving in his throwing mechanics.

Perhaps the biggest jump needed from Bryant may come in his understanding of the offense. This spring will be his second, and this will give him more reps to improve his pre- and post-snap reads. There are two major differences in Watson and Bryant at this point. First is his arm talent, and second is his decision making. Bryant is not as experienced and needs more reps.

The good news for Bryant is that he is a tireless worker. He has and will continue to put in the extra time to get more experience and have a better understanding of the mental aspect of the game. The other good news is that the physical tools are there. The offense would look different with Bryant, but it could still be very effective.

Tucker Israel missed most of the fall with a broken bone in his foot, and this becomes a big spring for him. He is undersized but does posses a live arm. This is a big spring for him as he tries to impress enough to hold off Schuessler for the third spot at this point.

The three backup candidates will not beat out Watson this spring, but they will have a chance to impress Streeter and the staff one last time before true freshman Zerrick Cooper arrives on campus. Cooper is a terrific passer who could make things interesting for the other three backups if he arrives on campus and produces the way the staff thinks he can.

Finally, this is the first spring the staff will have to think about life after Watson. In some ways, the race for the starting quarterback after Watson leaves begins Monday.