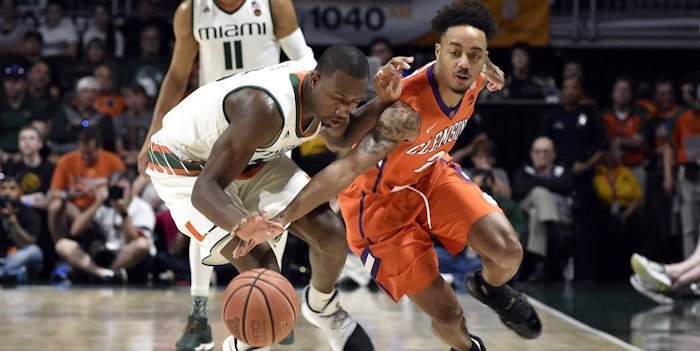 Wow, it is the middle of January and the men's basketball team at Clemson is ranked and only has 2 losses. Count me in the number of fans hoping that we were wrong about keeping Coach Brownell through all the struggles. This team finally has at least some depth in the front court and continues to amaze in shooting the ball.

With games against Notre Dame, Virginia, Georgia Tech and 2 against Carolina before the end of the January, if the Tigers could find some way to go 3-2 in this brutal stretch, hopes would be high for a long needed trip dancing in March Madness. Sometimes watching the games is like a stress test because if execution and fundamentals were any where near as good as the shooting, this could be a break through year. If this team can continue knocking down shots and understand that you just cannot make lazy passes and give up easy offensive rebounds to the other team then basketball could finally be relevant at Clemson again. Go Tigers!

This team has achieved more than I thought they would have in the pre-season. They do shoot the ball well and have several options on the offensive end. Their offense has enabled them to overcome turnovers which have been an issue at times. The defense is better than I thought it would be as well. You are right in that the schedule is very difficult in the next few weeks, but this team is very experienced and can handle tough road games. This is going to be fun to watch over the next two months.

Love the renovations to Littlejohn, long overdue. One thing I don't get is why did they position the team benches with their backs to the TV camera. Takes away much of the ability to see the coaches coaching during the action. Has anyone brought this up? Do you think they would flip the court?

And while I am at it, what is up with the giant school logos in the middle of the court? I think our Tiger Paw is a bit out of proportion but I can live with it. That NCSU logo last night was ridiculous. You could barely make out the players because of all the writing on the floor. I guess corporate logos are next.

I have heard some complaints but not too many. I doubt they flip the benches. The logos are getting out of hand, but it’s funny how I don’t mind it at Clemson but do at NC State, lol.

Will Clemson’s 2018 defensive line be the best of any in college football history? Thanks and go Tigers!

It’s hard to compare eras, and I am not familiar with some of the other great ones, but this is as good as I have ever seen.

I think it’s easy to see Clelin Ferrell, Austin Bryant, and Dexter Lawrence will play in the NFL. I don’t think it’s a stretch to think younger players like Jordan Williams, Xavier Thomas and KJ Henry have NFL potential. It also wouldn’t shock me to see another player or two like Albert Huggins, Niles Pinckney, Josh Belk, Richard Yeargin or Justin Mascoll making the league.

Everything starts up front, and this defense should be special considering the returning talent.