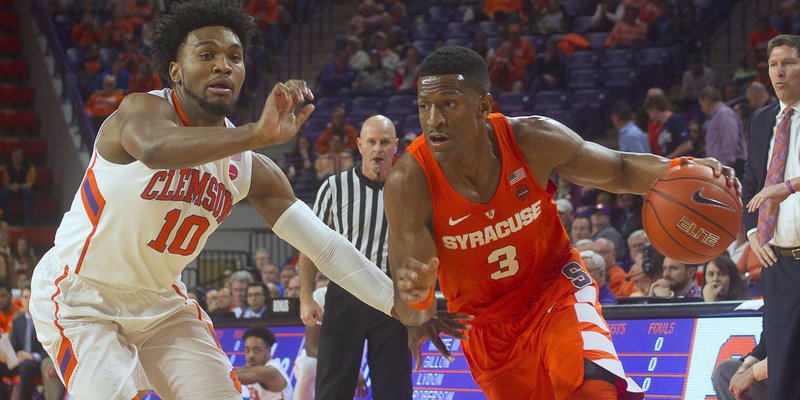 After it seemed The Tigers would never win again against Roy's Heels in basketball, we finally found a little defense in the 2nd half and held on for a huge win. I said in an email a little over 2 weeks ago that if Clemson could at least go 3-2 in the next 5 games things would be exciting in basketball again and the win against Carolina made that happen. The schedule is more favorable the rest of the year and a winning ACC record is not only entirely possible but should happen.

When Clemson shoots the ball well, they are very good. There are still lapses on defense, bad passes and too many silly fouls but this team is fun to watch and is competitive. In golf you have to make putts, in football you have to be able to throw and catch and in basketball you have to knock down 3's and right now Clemson is doing that.

There are games left that can be won and maybe a double bye in the ACC Tournament might be possible. Surely, this is one of the best 64 teams in the country and making the NCAA Tournament again will finally be a reality. If only Zion would have picked Clemson where he could have been a star instead of Duke where he will not even start, this could have been a truly break through year.

Playing this well after the injury is impressive. Clemson was one of the best teams in the league before Grantham got hurt, but winning without him is impressive. I think they are doing the little things well. Everyone sees DeVoe’s threes, but his two offensive rebounds were huge. Also they are starting to get contributions from Trapp, William, and Sims.

I think the goal here is to make the top four of the ACC. This would get them a double bye in the ACC tournament and this is attainable after the UNC win. This Wake game is big though. If the Tigers can win they will be big favorites Thursday against Pitt and could get them to 9-3 in the league.

Can you explain the ACC cross-division scheduling in football? Two years ago we went to Miami. We did not play them in the Valley the year before, or the year after. Last year Pittsburgh came to the Valley, and I don’t know when they get the return home game. This past year we were at Va Tech, and they don’t come to Clemson this year. There doesn’t seem to be a discernible pattern.

The opponents are on a pure rotation basis without a return trip the following year. In other words, they play their way through the other division but it is not a home and home rotation. Hope this makes sense.

I know we are winning and I am loving it. I never have believed in Brad Brownell but this year we are looking really good. Why isn't AJ Oliver getting any playing time?

This is Brownell’s best team and they are fun to watch. I understand the doubt, but this team is different. Oliver hasn’t played because he is a true freshman that hasn’t gained the trust of the staff yet. Also it is hard to break into a backcourt that features the experience of Mitchell, Devoe and Reed. He will play a bigger role next year when DeVoe graduates.