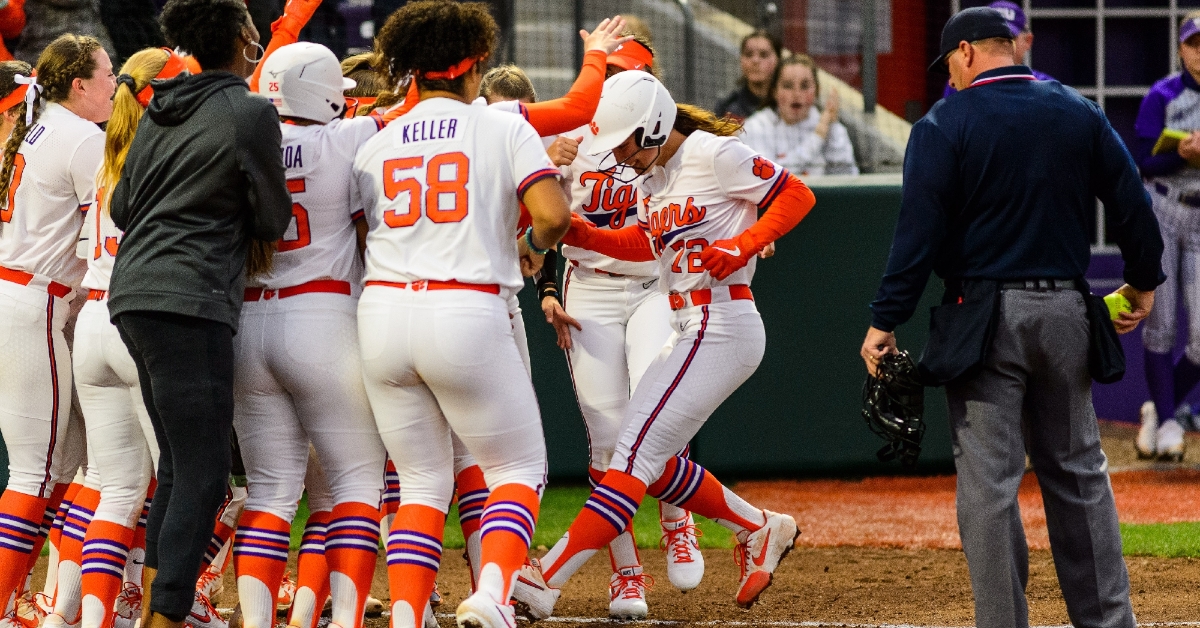 Cagle is greeted at home plate after her homer

CLEMSON –Clemson’s bats came through in the nightcap.

The Tigers pounded out eight runs on ten hits and Logan Caymol didn’t allow a run or hit as Clemson defeated Western Carolina 8-0 in the second game of a doubleheader Wednesday evening.

Caymol, the program’s first commitment, earned the win with her complete-game victory. She walked two and struck out 11.

"Great day for the Tigers in game two. Just a fantastic atmosphere to play softball in tonight," head coach John Rittman said. "Super-excited to get that first W at home under our belt. Dealt with a little adversity in the first game and took the loss in a tough-fought game. I thought the Western Carolina pitcher did a good job of keeping us off-balance. We had a couple of opportunities to score and just couldn't get the timely hit and they got the timely hit. That is softball sometimes.

"I was really proud of our team the way they battled back in the second game. (Valerie) Cagle's two-run homer early in the game took the monkey off our back a little bit. And Logan Caymol, what a performance tonight. A no-hitter and 11 strikeouts, just a dominating performance. That took a lot of pressure off of us. We are excited about that win in a great atmosphere tonight."

It didn’t take long for the Tigers to get on the board and score the first run for the home team and hit the first homer in the new stadium.

With one out, Grace Mattimore walked on four pitches, bringing up freshman Valerie Cagle. Cagle – the losing pitcher in game one, fell into a quick 0-1 hole. The second pitch found too much of the plate and Cagle hammered it over the wall in left-center for a 2-0 lead. The homer was Cagle’s second of the season.

The Tigers added to the lead in the bottom of the fourth. Abi Stuart led off the inning with a ringing double to left-center, and after a pitching change, she moved to third on a pitch that went to the backstop. Two pitches later she scored on another wild pitch and Clemson led 3-0. Alia Logoleo walked on a 3-2 pitch, bringing up JoJo Hyatt. Hyatt lashed a 2-2 pitch to right-center for a run-scoring triple and a 4-0 lead.

Cammy Pereira laced a 2-1 single to score Hyatt and Clemson led 5-0. Mattimore walked on four pitches to put runners at first and second with no one out to bring up the hot-hitting Cagle. Cagle split the gap with a double that scored Pereira, moving Mattimore to third and Clemson led 6-0.

The lead grew in the bottom of the fifth. Stuart walked on four pitches to lead off the inning and Bailey Taylor was hit by a pitch. Both runners moved up a base on a wild pitch and Stuart scored on a fielder’s choice to third off the bat of Hyatt. Hyatt’s bouncer was scooped quickly at the bag but Stuart was moving on contact and slid under the tag for a 7-0 lead. Taylor went to third on the play.

Pereira drew a full-count walk, loading the bases for Mattimore, who split the gap in right-center to score all three runners and end the game at 8-0.