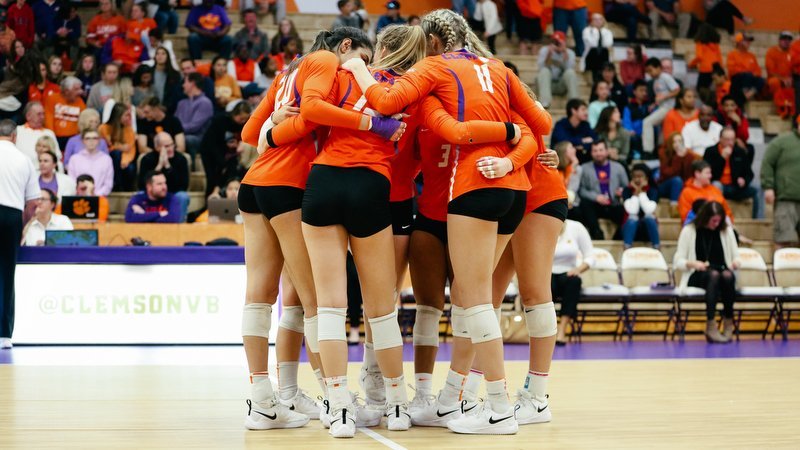 CLEMSON – All eyes are certainly on the Clemson football team as they prepare for Saturday’s ACC Championship against Pittsburgh, but there is a team right across the moat that’s also playing for its postseason lives.

The Clemson volleyball team (17-14 overall, 8-10 ACC) opens play in the National Women’s Invitational Volleyball Championship Thursday night at 7 p.m. against Alabama A&M, marking its first postseason appearance since 2009 when the Tigers received a bid to the NCAA Tournament.

Under second-year head coach Michaela Franklin, the Tigers were voted to finish 12th in the ACC, but ended the season in ninth place, it highest ACC finish since 2012 and the 17 wins were the most for the program since 2012.

“I think, obviously, we're excited and it's definitely a step in the right direction for our program. All of the hard work that our ladies have put in, we're honored to bring back the tradition that the program has had,” Franklin said. “I think the nice thing is this is what they're going to know now. Being young players and being freshmen and coming in and playing, all they know now is to extend playing and to keep playing on. It sets a really good precedent for our program moving forward and for our returners, they know how important it is to extend our season and the hard work you have to put in for that. It's just a really positive step for our program in the right direction.”

Being selected to host Alabama A&M, Appalachian State and Radford in the first round was automatic, but Clemson’s fan support was a major contributing factor, and Franklin said she hopes that outpouring of support continues Thursday night.

“The NIVC selects who they would like to have host. You have to meet a bunch of requirements, so we were just fortunate enough to end up being one of those teams,” she said. “I think one of the big things we've had pretty consistently all season long and since I've been here is a pretty consistent fan base and support and an amazing crowd. That's awesome for us but it's a good thing for the sport, in general, to have that kind of support for us and for postseason play. Whenever a fan of volleyball wants to watch postseason play and watches the NIVC and sees seats filled with an awesome crowd and an awesome environment, that's good for us and we love that but it's also good for the sport.”

With nine first-year players, it took time for the team to find its groove, but the Tigers won seven of their last 10 matches, including a five-set thriller with Boston College last Friday night. Franklin said there was a lack of experience and maybe even a little bit of nervousness to begin the season. However, this group is playing like a team full of veterans as tournament time approaches.

“I think the biggest thing I'm proud of with this group of women is the growth that we've made throughout the course of the season,” Franklin said. “I talk a lot about how at the beginning of the season, I felt like we were kind of anxious to play because we weren't sure and we were inexperienced. Now, we're excited to play and that's a huge change and a huge shift in the mentality for us. The experience factor also tags along with that, that shift from anxiousness to excited to be able to play.”

Three of those newcomers – Solei Thomas, Gabby Easton and Brooke Bailey – garnered ACC postseason honors – and are a big reason why Clemson is still playing in late November.

“Obviously, we just had three get postseason ACC honors, so they're easy to talk about,” she said. “Solei Thomas, who is an All-ACC Freshman selection, is a dynamic hitter. You'll notice her right away. Gabby Easton is a freshman setter for us, who is also an All-ACC Freshman for us, is from our own backyard. Her parents went here - dad played football and mom played volleyball - so she's a Tiger through and through. She's done a phenomenal job of running the offensive side of things for us. Brooke Bailey is a sophomore and was Second Team All-ACC. This was her first year here. She's also a dynamic hitter.”

If you haven’t seen Clemson play this season, Franklin said there won’t be a lack of excitement when the Tigers are on the court and with it being the postseason, there’s should to be plenty of drama.

“The way our team competes together. The energy, the fire, the passion they play with. It's a lot of fun to coach and I'm sure it's a lot of fun to watch,” she said. “The style of play that we have is what fans can come in and watch. I think any time you get into postseason play, it's tournament time, so people are going to play until that last ball drops and claw and fight for it because anything can happen in tournament time. I expect some high competition and some long rallies. I'm looking forward to our team being able to step up and have to play when it's tournament time and it's do or die.”