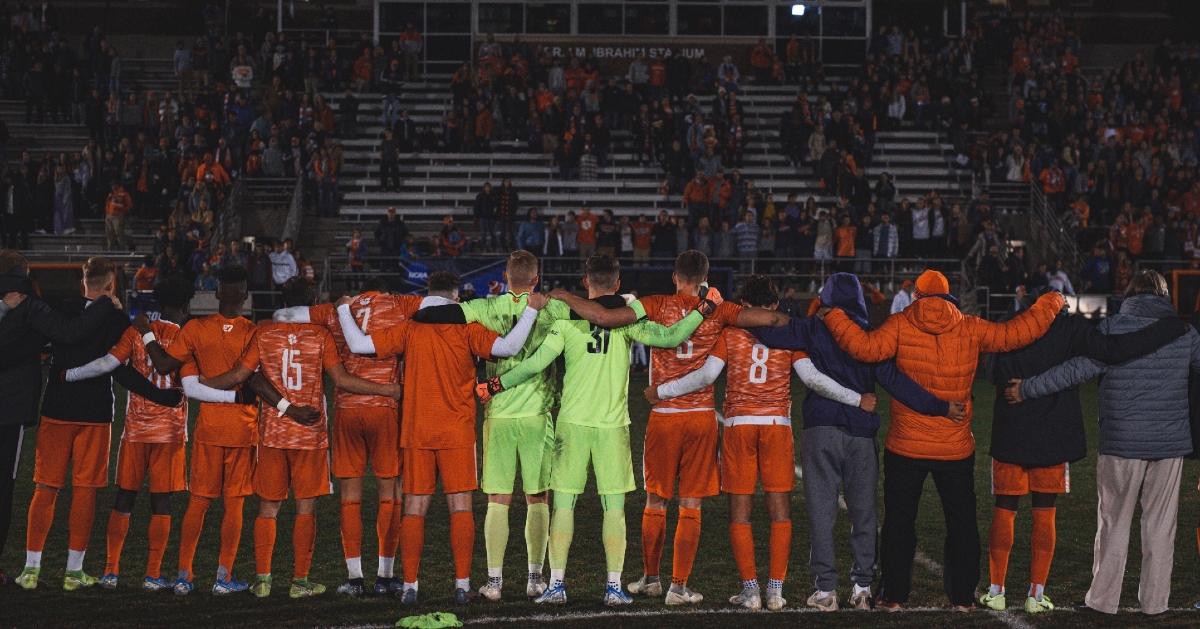 A Felipe Fernandez penalty kick try was stopped by Stanford’s Andrew Thomas minutes before -- a second save of the period for Thomas after also stopping nation-leading scorer Robbie Robinson -- to clinch a 5-4 edge for the Cardinal and advance them to the College Cup in front of 3,267 fans at Riggs Field.

What was on Noonan’s mind?

“This team came together this year to be and do something uncommon,” he said. “Although we’re not going to win the national championship, they accomplished what they came together to do. They were selfless like no other team I’ve had. They were talented. They were other-centered in terms of how they went about what they did every day. It’s just hard to deal with the disappointment of never having this team together again. It was a special year.”

He watched a season full of entertaining soccer from his team, which went into the weekend with the nation’s lead in goals (69) on its way to a No. 2 national seed in the NCAA Tournament.

Clemson’s best chance in the first overtime period came on a free kick just outside the box from Robinson, who sent his try low and powerful to the Stanford goalkeeper's right -- Thomas making the diving stop to keep the period scoreless in the golden goal-format.

The second overtime period was controlled by Clemson (18-2-2), which had a series of corner kicks in the final minutes but was held to only two shots.

All of seventh-seeded Stanford’s attempts on net in the penalty-kick period went in, including the eventual game-clincher from Marc Joshua past Clemson’s Daniel Kuzemka.

“I was exceptionally proud of our team tonight,” Noonan said. “They battled throughout the game and played some really, really good soccer. I think on the night we were probably the better soccer team. And that’s always difficult when you don’t advance. When you get to penalties, it’s a coin toss. Their goalkeeper saved more than our goalkeeper or whatever, what happens -- happens.”

Clemson fell behind first for only the second time this season after some good end-to-end action in the first half.

After a quiet period, Stanford’s Ousseni Bouda rocketed a shot off the top of the crossbar. A Gabe Segal chance in the 35th minute then set up the Cardinal’s fifth corner of the first half, where Derek Waldeck lofted in a cross that found Tanner Beason for the header to take the 1-0 lead.

After having its first goal equalized in the prior three games, Clemson played spoiler this time after the Cardinal (14-2-5) had the early run of play in the second half.

Clemson’s Grayson Barber sent a cross to the far post that found Mohamed Seye’s header attempt in the 69th minute, his fifth goal of the season. Seye came on as a sub in the 60th minute.

After 90 minutes, Clemson had a single shot on goal per half with nine shots overall to Stanford’s 11 shots. Clemson starting goalkeeper George Marks had four saves through two periods.

“Give Stanford credit, they defended exceptionally well,” Noonan said. “In the first half, we played some really, really good soccer. We didn’t get numbers in between the posts when the ball was there to be had. They blocked a lot of shots and did what they needed to do. But the guys played perfectly to the gameplan and did everything that they needed to do and asked of them. We knew they were dangerous on set pieces and defense and set pieces often determine games...Goals are hard to come by this time of year.”

Coming off of missing the 2018 NCAA Tournament, Clemson started the season unranked but a 4-1 home win over South Carolina started a campaign where the Tigers went into the ACC Championship as the top seed in one of the nation’s toughest conferences.

“We are unquestionably one of the top teams in the country. There’s no denying that,” Noonan said. “That’s disappointing. Last year, we were not. Every team is different. If I had to describe (the season) in (a couple) words, it’s character. It’s leadership. And they wanted to be uncommon. They are. They accomplished that … They got one trophy -- one of three -- but we wanted the big one.”

Clemson fell short of making the schools’ ninth College Cup but the team did make a third Elite 8 in five seasons and a sixth NCAA Tourney in the last seven seasons.

“A lot of people define success about what’s on the scoreboard and trophies,” Noonan said. “What was uncommon about this team is they defined success differently. They defined success at getting better every day and trying to chase their dream. And their dream was to win the national championship. The scoreboard tonight is not how we define our success. The way we define our success is the tears that you see in my eyes and every player out there. That’s why you play the game. Soccer is about motion but it is also about emotion … And that’s why the NCAA Tournament is such a wonderful competition. Good luck to Stanford and the other advancing teams -- I’m going recruiting.”