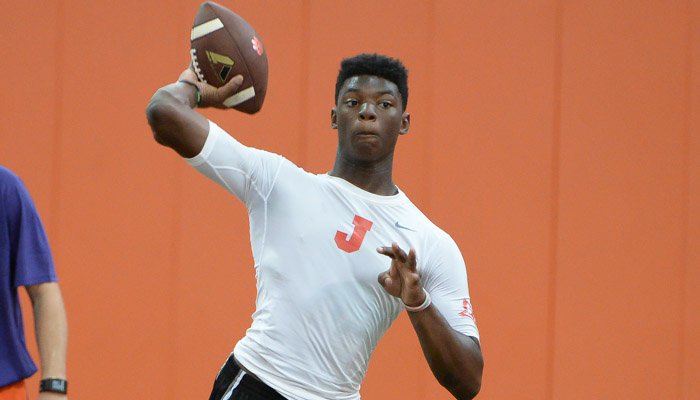 Cooper has been a frequent visitor to Clemson's campus

View Full Profile ’s summer has been busy and filled with travel and recruiting drama. Now he’s ready for the routine of football season.

The Jonesboro (GA) 2016 Clemson quarterback commit has been all over the map, including a trip to Gainesville for Florida’s Friday Night Lights event that created a social media firestorm. Cooper insists, however, that he’s just taking in the sights and that Clemson has nothing to worry about when it comes to his commitment to the Tigers.

Cooper said the summer has actually been both busy and fun.

“The summer has been great. It's been very busy actually,” Cooper told TigerNet Sunday evening. “I've been in and out of town with Cam Newton like three times. I've been to South Carolina, North Carolina and Florida. I've been to Los Angeles. It's just been busy. It means a lot. It means I am blessed with the talent and I have to be able to go out and see other places and things like that.”

Cooper said that despite his commitment, other schools haven’t backed off of the chase, but his parents help keep him grounded.

“It really never stops. I meet new people. But recruiting never stops,” he said. “They (his parents) have been very helpful because I am young. I can go to them with questions about things, and they sit me down. They tell me it's my decision, but they give me their input.”

“I hear from the Clemson coaches every week,” Cooper said. “Coach Streeter and I are on the daily play. If we talk on a Thursday one week, then we talk on a Thursday the next week. We try to talk on the same days. Coach Streeter and I are getting to know each other, and we've built our relationship. We talk about life and football and stuff like that.”

As a result, Clemson fans shouldn’t be concerned about his commitment.

“They don't have to worry. I think I've said it enough that I don't feel like I have to keep saying it. I am committed to Clemson,” he said.

Cooper said he is now getting ready for his high school season and hopes some of the madness will go away.

“I am very healthy,” he said. “I have been out with the team and then I've been doing rehab on my so it won't get stiff. But I have been getting ready for my season.”

As for his relationship with Newton, the current quarterback for the Carolina Panthers, Cooper said he’s just leaning on the former Auburn playmaker for advice.

“He is my favorite quarterback,” Cooper said. “He tells me that when it comes to colleges and things like that, it's a business. He tells me to stay humble and that at this level you will see how many people are your real friends.”

As a sophomore, Cooper split time at quarterback with senior Mario Atkinson at Jonesboro, and they helped lead the Cardinals to a 6-4 record. Cooper threw for 1,200 yards on 83-of-156 passing with six touchdowns. Jonesboro lost 20-19 in overtime in the Region 4-AAAA play-in game against Locust Grove, causing the Cardinals to miss out on a state playoff berth. He missed all of last season with a torn ACL.