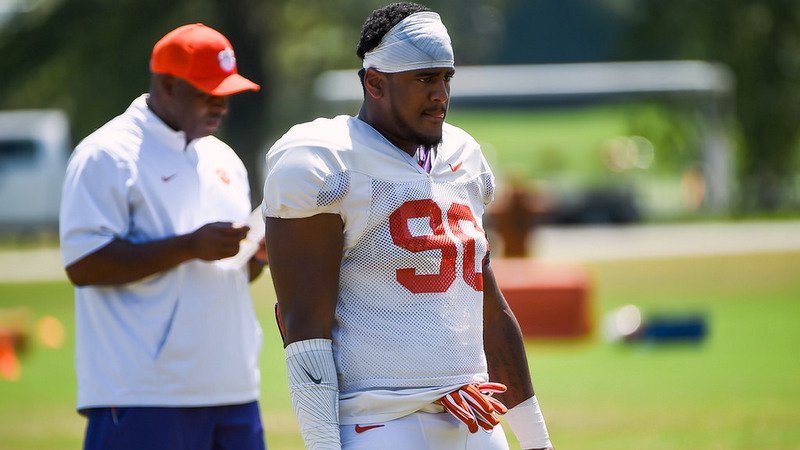 Jordan Williams is happy to be back at practice

CLEMSON – Jordan Williams walked over to the gathered media following Friday’s season-opening practice with a sweat-covered jersey and a tired but happy smile. No more standing on the sidelines for a guy who’s ready to step into a big role.

The Virginia Beach native enters 2019 following a redshirt freshman campaign in 2018 in which he recorded 13 tackles (3.0 for loss), 1.5 sacks and a forced fumble in 147 snaps over 12 games. However, offseason surgery forced him to miss all of spring practice, which he spent looking on as others took the valued snaps.

"That yellow jersey, I can't stand it," Williams said. "I don't ever want to see it again. Obviously, injuries are a part of football, but it felt good to be out there today flying around and being able to take on that leadership role in the field as opposed to being off the field in the spring. It felt good to be out there flying around and doing things I missed doing during the spring.”

The Tigers lost four starters along the defensive line, including several team leaders, but Williams says there are plenty of veterans willing to step in and let their voices be heard.

“Me, Nyles (Pinckney), Justin (Foster), Logan (Rudolph), Xavier (Thomas), and K.J. (Henry) are all going to be some great leaders,” William said. “We appreciate everything those guys did for us, but we’re going to build our own legacy. We don’t want to be Christian, Dex, Austin, and Cle. We want to be our own defensive line.”

Williams then said he finally feels completely healthy and is happy with his weight of 303 pounds.

“I’m really happy with where I am. I’m actually lower than what I thought I was going to be. I was getting with (Adam Smotherman). There has been a lot of good guys pushing each other doing extra. Doing that a lot allowed us to keep our weight where we wanted it to be.”

What will he be working on this spring?

“To get the little things right we’ve just got to keep putting emphasis on them. Little things like running off the field,” Williams said. “That will build up to be able to do little things on the field with our technique, emphasizing those little things from day one.”