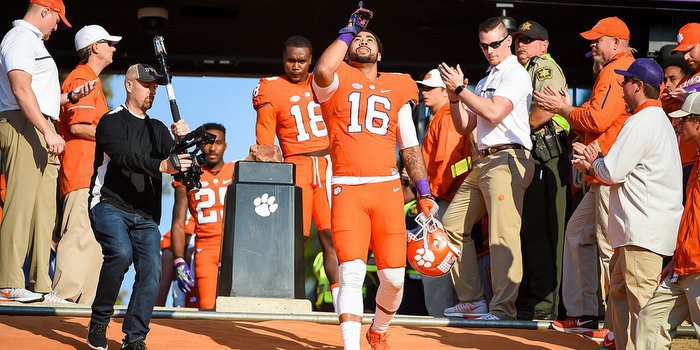 Tight end Jordan Leggett met with the media Monday afternoon in the WestZone, and he was honest about Clemson’s loss to Pitt last weekend and the turnovers that led to the defeat, but the Mackey Award finalist told the media he thinks the loss will wind up helping the Tigers in the long run.

But first, he wanted to make sure everyone knew that quarterback Deshaun Watson was responsible for just one of his three interceptions against the Panthers, two that occurred with Clemson looking to score.

“I never lost hope during that game on Saturday, but it comes down to the turnovers,” Leggett said Monday in the Westzone. “Really, Deshaun only had one of those turnovers. The last one was on me, and Deon had the tip ball turnover, so we just have to get that corrected.”

When pressed, Leggett said he ran a bad route on the last interception, running a defender into the same area as receiver Hunter Renfrow, the intended target and then added that wide receiver Deon Cain could have been aggressive on another of the interceptions.

“The first thing you want to do is blame the quarterback when you have interceptions. But when you look back at it, it (the third one) was a bad route on my part,” Leggett said. “On the first one, he couldn't really see the defender, but he still has to make that throw. On the one to Deon Cain, I don't know why Deon didn't jump for the ball, but tipped balls are always picked balls, and that's what they've been teaching us. They scored too many points on that, and that is what affected our game.”

Leggett said that the team still realizes all of its goals are still on the table. 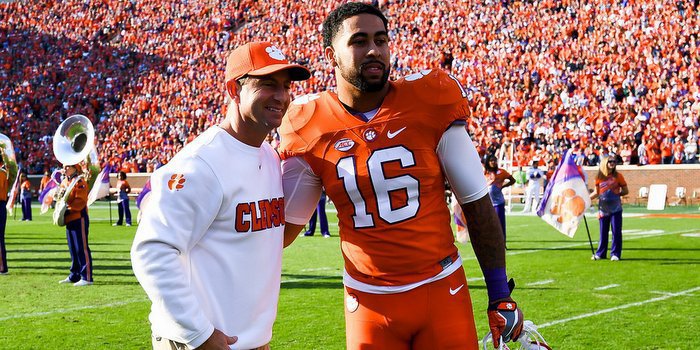 “We still have the ACC Championship ahead of us, and a couple of teams in the Top Ten still have to play each other, so I'm not too worried about it,” he said. “I think we'll still end up in the Top Four. From last year, just going undefeated the whole year just added that much more pressure.”

Leggett was asked if the team felt the pressure following last season’s perfect regular season and title game appearance, and he said yes.

“People expected you to win every game and now, we're not invincible - that's what this Saturday just proved,” Leggett said. “I feel like that's only going to help us in the long run, just for the young kids that came here thinking we were going to go undefeated and win a National Championship. Just having that loss under our belt will motivate us and put that chip on our shoulder going into the rest of the year. That feeling in the locker room Saturday was terrible. Nobody wants to feel that again. The pressure is there, but it's if you pay attention to it. We can focus in on us now. We don't have to worry about people pushing us or pressuring us into having a perfect season. Last year, Alabama won it 14-1, so there is no reason why we can't do it.”

Clemson’s College Football Playoff chances took a hit with the loss to the Panthers, but three of the teams in the top four tasted defeat, and Leggett said the team knows they control their own destiny and that fans will see the Clemson team they’ve expected to see all season.

“I didn't really watch any of the games on Saturday, but at the end of the night it was everywhere on social media. Teammates on this team were texting each other saying, 'Don't worry boys. We still got it no matter what.' It's going to play a big part and switch it up in the Final Four, but I feel like we'll be good,” he said. “I think you're going to see a more complete team, these last couple of games that we do have. That's how it goes. Everybody wants to refer to last year's team and last year's offense and the numbers that they put up. It was kind of there and everyone kind of expected us to live up to the standards of last year's offense, but when you look at it, our offense is doing just as good as last year, even better than last year's.

“I think the pressure has kind of gone away because this offense that we have now is pretty lethal. There's nothing too different; it's just the turnovers. We drove the field on them all day, but we had those turnover so close to the red zone, and that kills a drive. We always want to come away with points whether it be a field goal or touchdown, but it's just the turnovers in the red zone. We have to take care of the ball.”