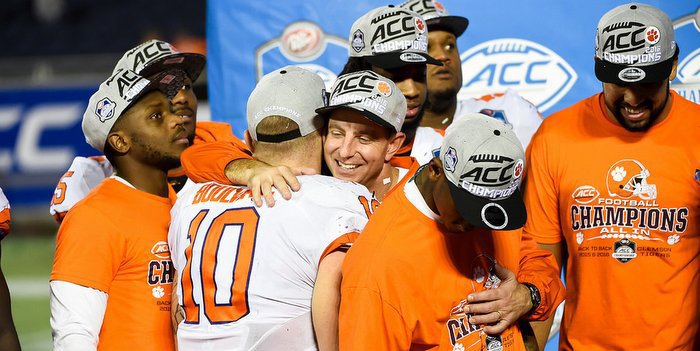 Second-ranked Clemson has about three weeks of rest and bowl practice before packing their bags and equipment trunks and heading to Arizona for the College Football Playoff Semifinal against Ohio St. in the Fiesta Bowl.

That down time – the time in between the end of the regular season and the bowls themselves – is often littered with academic casualties and suspensions as players relax after four grueling months of practice, school work, and games.

Head coach Dabo Swinney told the media he doesn’t expect any problems from his players going forward, simply because this has been his easiest team to coach, and that’s something he attributes to the leadership of the seniors.

“No, because from the first meeting, it was game on. I mean, literally from day one, this group of seniors were unbelievable,” Swinney said. “And I’ve said it many times; this has been the easiest team I’ve had to coach. Easy. It’s been the most fun team I’ve had to coach, the most committed team, the most focused. It’s just been we haven’t been perfect, you know. We won the turnover margin Saturday night. How about that? We won the game. So we’ve had some things we had to overcome, but this has been a team that was focused from day one. I mean, locked in.”

Swinney said that focus was evident as early as spring practice.

“I go back to our spring. We have accountability teams, and every so often we’ve got to run them, and they’re all accountable,” he said. “There’s about what, eight or nine of them on a team, and they’re all accountable to each other. Everything counts. And the first three runs that we had scheduled, we had no runs. Nobody had a run. And I’ve never had that, never been around that, ever. The first team, I’ve ever had that the first accountability run that we didn’t have to have anybody run. So the discipline, the commitment, the accountability has been there with this group from day one. So, no, I never worried.”

Junior quarterback Deshaun Watson says that the seniors deserve credit for their leadership, but that Swinney deserves some of it, as well.

“It’s just the coach here and just the people that want to be great and want to be special on and off the field. And just like you said, the leadership of this team, starting with the seniors and the older guys showing, the younger guys the way and the ropes,” Watson said. “And for us to be successful, it starts off the field and the way you live in the classroom when you’re in the social life in the community, it all starts there, and it translates to the field. And you can see it really shows, We got there on Saturday, and it just starts with the leadership and the seniors, everyone doing the right thing and, just everyone wanted to be special and be great.”

It’s the culture that Swinney has worked to build since taking over in 2008.

“We’ve got a culture there that sustains us. And it’s all about being excellent in everything that you do, you know. And that’s what we talk about all the time,” Swinney said. “We don’t really get too locked in, focused on results. We let everybody else worry about that. We stay focused on our daily commitment, how we handle our business, how we prepare, how we practice, how we love each other. And, again, when you got people like this that are taking 20 hours in the summer, that are honor roll students and graduating in three years and that’s your leaders, it makes it easy.”

There shouldn’t be a dropoff next season – this is a young team with several freshmen and sophomores playing key roles.

It’s a program that’s getting better.

“This team is incredibly deserving. I think we are still improving. I think we’re getting better,” Swinney said. “We’ve got a lot of young guys. Everybody thinks we’ve got this old veteran team. We really don’t. We’ve got we’ve got about 22 seniors and juniors on scholarship and that’s it. But they’re impactful people, and they’ve pulled everybody along the way. Like Denzel Johnson out there tonight on kickoff coverage. I’m so proud of him. I mean, it’s just there’s a lot of guys that are making big contributions. Garrett Williams was taking on the double teams and all the stuff out there and the special teams, so it’s this team’s very deserving.”