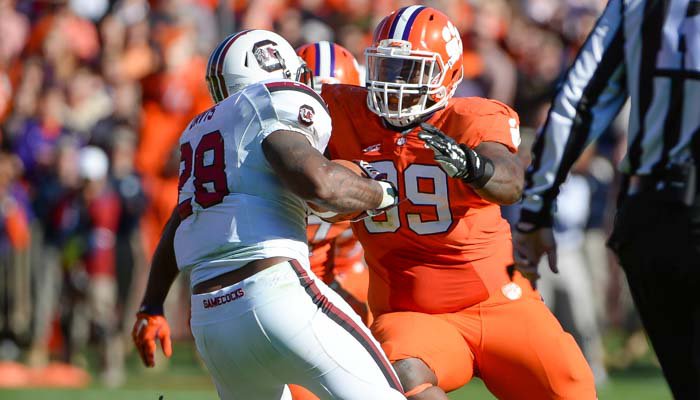 Williams had five tackles, two tackles for loss and a sack.

DeShawn Williams
Sr. Defensive Tackle
#99 6-1, 292
Central, SC
View Full Profile told the media earlier this week that when it comes to what had been a five-game winning streak by South Carolina in the series, enough was enough. He backed up his words with a strong performance on the field Saturday.

Williams had five tackles, two tackles for loss and a sack and made sure his voice was heard throughout the game, talking to any and every South Carolina lineman he came across. Following Vic Beasley

Vic Beasley
RS Sr. Defensive End
#3 6-2, 236
Adairsville, GA
View Full Profile ’s sack and forced fumble on South Carolina quarterback Dylan Thompson in the second quarter, Williams made a first down signal with his right arm, pointed it at the South Carolina offense as it left the field and kept the pose for a solid five seconds.

Williams said after the game that he woke up Saturday morning knowing the Tigers were going to win.

“I had a good feeling this morning. We knew that we could win,” the Daniel product said after the game “You know how in basketball you get in that groove? That was me today, man. This was for the seniors today. Five years is enough. We put the hammer down today and showed who is really the top team in the state.”

Clemson’s defense tallied 13 tackles for loss and sacked Thompson four times, and Williams said the effort was a result of enough being enough.

“We were just doing what we have done all year. South Carolina is a good opponent, but this is personal. You have your head coach over there taking jabs at us, and you have the whole team doing the five bomb,” he said. “You know, enough is enough. We shut that up today. Now we can celebrate for 365. There is no greater feeling, and we are going to party all day. Next week, we will find out where we are going (for a bowl game) but right now we are going to celebrate this one.”

Williams said he let South Carolina’s offensive line know early in the game that they were in for a long afternoon.

“I have a lot of respect for their front. They are big and physical,” he said “They have A.J. Cann, who is a local guy from Bamberg, but I told him, 'I am going to be here all day.' We had that physical matchup all day, and we know somebody up front was going to take over. We made sure we got them out of their comfort zone. We wanted to make them one dimensional, and we did. They couldn't run the ball. When we got pressure on him (Thompson) it got his rhythm off. He has talented receivers but he couldn't get it to them. We were in his ear the whole game.”

At the end of the day, enough was enough.

“Me being a local guy, I've had to hear it. We've all had to hear it,” Williams said. “This right here, man, this meant so much to me. Growing up in this rivalry, I knew where it started. Clemson has dominated this series, and today we just wanted to go out there and be dominant. I played with a little chip on my shoulder.”