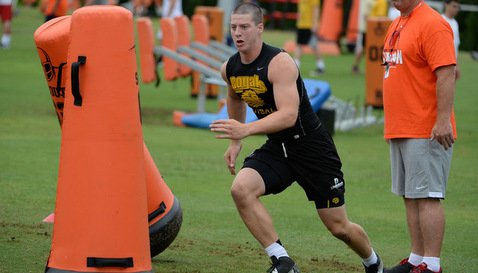 Garrett Williams works out at Dabo's camp this past summer

You only get to one shot to make the most of your last year of high school, and after a lot of thought Garrett Williams

View Full Profile has decided to do that.

The Orlando (FL) First Academy tight end and Clemson commit originally planned to enroll at Clemson in January but after talking with friends, family and other resources, Williams made the decision to stay in school and enjoy his final high school semester.

The nation’s No. 2 tight end and four-star prospect according to ESPN told TigerNet Tuesday night that his decision has nothing to do with his commitment to Clemson but that he wants to spend his final days in Orlando with friends that he has made over the last 13 years at First Academy.

"I've just been talking to my parents and to the people around me and the Clemson coaching staff to inform them of what I'm thinking," Williams told TigerNet. "I'm going to wait until the summer to enroll. My commitment is as strong as ever, so it's not anything like that. Your senior year only comes once. I want to finish it out where I started. I've been at my school for 13 years because I started here in kindergarten. I just want to finish it out strong and be able to graduate there with all of my friend and peers."

The 6-4, 225 pound prospect’s season has gone very well, even if he has spent the majority of his time carrying the ball instead of catching passes.

"It's been going really well. We're 9-1 right now and on Friday we play our first playoff game in the semifinals," he said. "I'm really excited about that. We went 4-6 last year, so it was a big turnaround to come out here this year and go 9-1 in the regular season. That was really exciting. Personal stats, we've been running the ball a lot and I have 98 carries for 1,042 yards. I think I've caught 11 balls for 228 yards. I have 18 rushing touchdowns and two receiving touchdowns."

With the season coming to a close, though, Williams can now focus on celebrating his high school graduation with his friends and class mates.

"There's a lot of things. Since I go to a smaller school we go on a senior trip," he said. "We'll go to Breckenridge as a senior class and I would miss that. I would miss prom and different events. Ultimately, just being there with my friends and working out with them, I would miss that for the last time. I just feel like all of that is important."

Williams will travel to Clemson for the home finale against South Carolina.