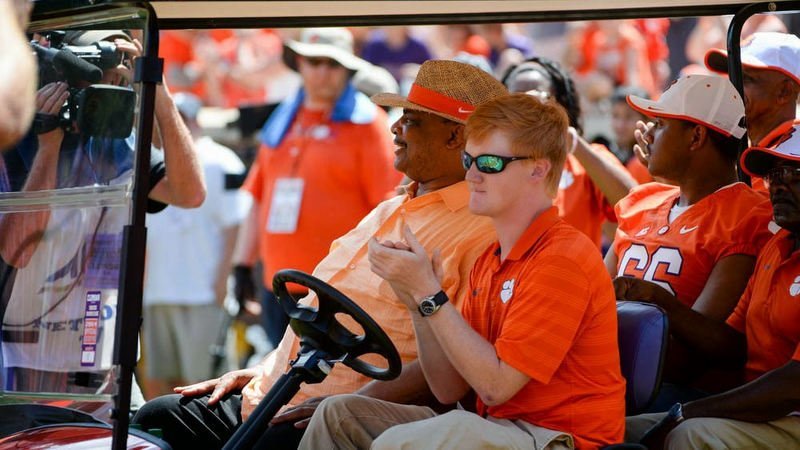 Every Clemson fan who has worn the paw on a Clemson football Saturday knows about William “The Refrigerator” Perry and his brother Michael Dean Perry. The brothers out of Aiken are a big part of the history of Clemson football history, and they are coming to Greenville this week to speak at the Hall of Fame Legends Speakers Series.

The Perry brothers will speak at the event, which will be held this Thursday at the Embassy Suites on Verdae Boulevard and will be held from 5:30 to 8 p.m. Single seat tickets start at $50 and are still available. Dinner and drinks will be included during the evening as will an opportunity to meet each of the Perry Brothers. There will be an opportunity to purchase special silent auction and raffle ticket items throughout the evening in order to support the SCFHOF and its career transitioning mission for student-athletes and other community programming.

The brothers are both inductees to the South Carolina Football Hall of Fame.

Michael Dean Perry, inducted into the Hall of Fame in 2016, played football for Clemson University before being drafted by the Cleveland Browns in 1988. He later played for the Denver Broncos and the Kansas City Chiefs.

His other brother, William "The Refrigerator" Perry, also played for Clemson and was pivotal in leading the Tigers to their 1981 National Championship under the coaching of Danny Ford. He was drafted in 1985 by the Chicago Bears and later played for the Philadelphia Eagles. The defensive tackle earned the nickname, "The Fridge" and was inducted into the Hall of Fame in 2014.

At his induction ceremony in 2016, Michael Dean told TigerNet that his brother only has one thing he doesn’t – a Super Bowl ring.

“I guess he can hold one thing over my head and that's a Super Bowl ring, but the thing I can hold over his head is player of the year and Pro Bowls,” Michael Dean said. “I don't know which one is better, but the guy was a phenomenal player. I didn't realize just how great of a player he was because he was my brother and I didn't look at him like that. When you have a moment and step back and look at his accomplishments and what he did at that size, it's really unbelievable. The Perrys hopefully represent Clemson quite well.”

He is also a big fan of Clemson head coach Dabo Swinney.

“Dabo has done a great job getting guys in and playing his system. When I come to Clemson and see some of my old teammates, the first thing we always say, 'If we had that offense, we might have won two or three national championships.' The guys are scoring 35 or 40 points a game and we struggled with 10 or 15 points a game,” he said. “It's great to see. I enjoy coming and watching the guys play. I'm looking for another national championship, absolutely.”