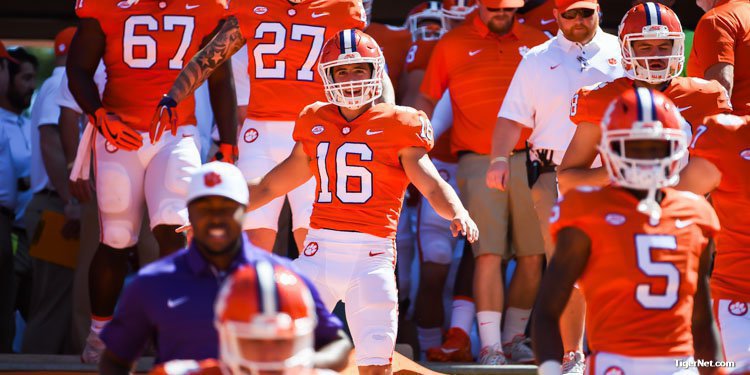 Will Swinney (16) enjoying his first trip down the hill

Swinney, the son of head coach Dabo Swinney, has run up and down the hill in Clemson Memorial Stadium a thousand times since his dad arrived on campus in 2003. He’s played in the snow and in the mud, and he’s run around the stadium under the summer sun.

As the son of the head coach, Swinney could have run down the hill with the team on game day at any time, but he wanted to wait until he felt like he deserved the honor.

“I always thought if I was going to run down it, I should be a player," Swinney told TigerNet earlier this week. "So I waited until I became a player. I am happy that I waited until I became a player. I've always seen them run down the hill and I've always loved it, but I've never run down it for a game. Just when the stadium was empty and playing around. It was awesome running down the hill. It was crazy getting to the top of the rock, and looking at the top of the stadium and stuff. I didn't jump or anything because I didn't want to fall the first time.”

Waiting at the bottom of the hill was his head coach and dad.

"He had told me before like, 'Hey, whenever you come down, come by and give me a hug.' I was like, 'Well, I don't know. I'll probably be so in the moment,"' Will said with a smile. "I was like, 'Well, we'll see. We'll see.' But I got down there, I was jogging and he was right there. I went up to him and gave him a quick hug. It was a really neat moment."

Will Swinney (16) enjoying his first trip down the hill"

The dad appreciated the moment.

“It was special. I told him I appreciated him giving me two seconds there to be a dad before he ran on by me,” Dabo said. “That was really neat. It's been a dream of his to come to school here and play here and to run down that hill. To have that moment was pretty special. I was proud of him.”

“That was pretty neat because that has been a dream of his,” Dabo said. “To be able to see your son achieve one of his goals and dreams in life, knowing how hard he has worked and I know that he appreciates the opportunity to run down that hill. He has grown up here. That was a special moment. It was neat for Kath to be able to be Mom. I didn’t get to see him on the field afterward, but Kath came down and got to be on the field with her son. It was great.”

Will also made it out on the field as a wide receiver, and said it was a far cry from the times he would play catch with his brothers Drew and Clay before ball games.

"It was really surreal," Will said. "You’re always trying to stay back on the sideline, like stay away from the field, and now I’m going out on the field to go play. It just felt like a dream the whole time."