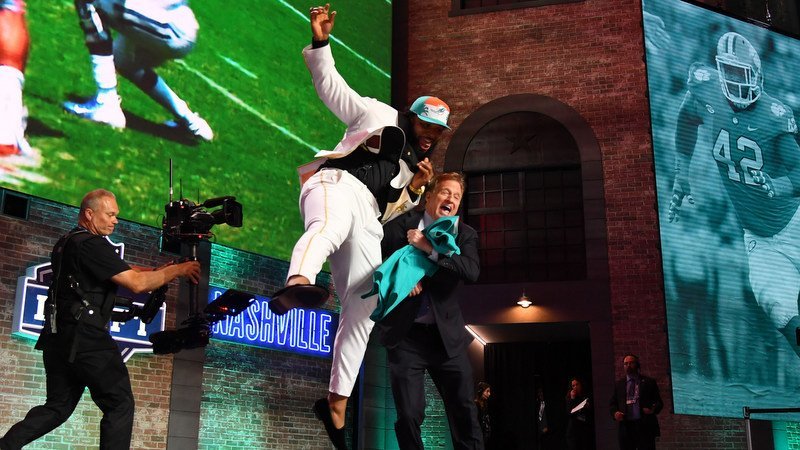 Christian Wilkins ran onto the stage at the NFL Draft Thursday night and looked for somebody to chest bump. The former Clemson defensive tackle quickly found his target, NFL Commissioner Roger Goodell. Wilkins gained speed and launched all 315 pounds in the air, all aimed at Goodell, and Goodell wanted no part of it.

South Florida’s introduction to the Miami Dolphins first-round draft pick shows just what they can expect from the affable, hard-working, multi-position talent.

Wilkins was introduced by the Dolphins Friday, and he said he hopes his leap at Goodell showed off his athleticism.

“First thing I thought (when I saw the picture) was, ‘Look at that vert (vertical jump).’ I had to show off my athleticism a little bit. I hope Dolphins fans and everybody saw a little bit of my athleticism. But that was cool. He (Goodell) was kind of just like cowering, seeing me, like late reaction. It was pretty funny, something I’ll remember forever, and I’m sure he won’t forget it either.”

Wilkins said he didn’t get any sleep Thursday night.

“I just couldn’t sleep all night, so excited, adrenaline and everything, being around my family,” Wilkins said. “Everybody is excited. I’m excited to be here. So I really couldn’t sleep. And then this morning at 7 o’clock a car was waiting for me outside, took me to the airport. (I) got a couple of hours of sleep on the airplane, which was good, so I’m able to be able to be in front of you guys looking nice and sharp, nice and shiny.”

With the initial excitement worn up, Wilkins said he is ready to get to work.

“I’m just ready to work, like I want to get started as fast as I can,” Wilkins said. “And it’s good I know where I’m going to be, I have my home just because that peace and now I can start get into a routine and things, not traveling and doing those things. It’s good just to know this is my home now and I can just get started and train and do the things I need to do to get me as ready as possible for day one when I have to show up.”

For Wilkins, playing in the NFL is a dream come true.

“I just loved every bit of it when I was just a little kid,” Wilkins said. “So when I was like about seven or eight years old, that’s when the dream began for me. I was like, that’s what I want to do. I want to play at the highest level someday. I was seven, eight when that happened; I’m 23. I just went to work and now I’m just so blessed to be in this position.”