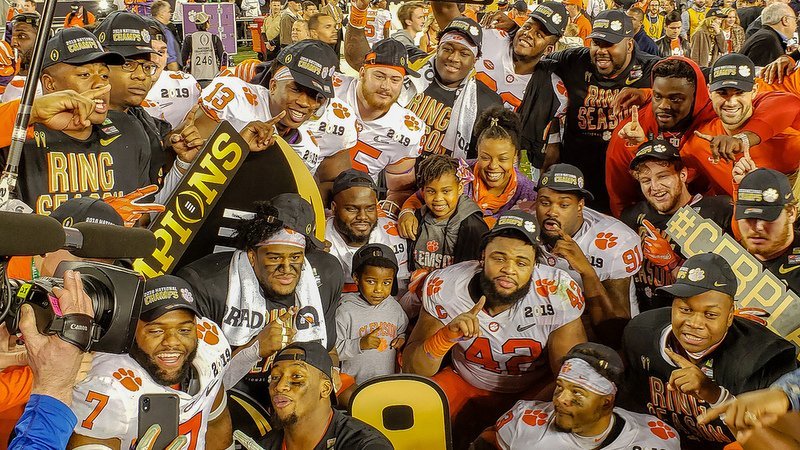 Christian Wilkins wants to leave Clemson better than he found it, and that means he had to raise his children the right way.

Wilkins departs Clemson with four ACC Championships, two National Championships, and enough personal honors to fill a large trophy case, but one of the things that gives him the most pride is his work with the younger players along Clemson’s defensive line.

“Those are all my sons, all my children. I've done a great job of raising those kids,” Wilkins said. “I think Clemson's d-line is going to be in good hands for years to come. Not just because we older guys showed them the way, but because those young guys are special. And special not just in the football sense and their talent, but special because of who they are and the type of people they are and how they work and their mindsets. It's how they approach every day - I know they will be fine.”

Looking to earn their stripes in the spring will be players like Xavier Thomas, KJ Henry, Justin Mascoll, Darnell Jefferies, Xavier Kelly, Jordan Williams, Justin Foster, and others.

“They are young guys and they are still growing up and they are learning and they are working their way through things. But there is no doubt in my mind that Clemson will be fine,” Wilkins said. “I just love being around those guys. I appreciate the opportunity to get closer to them and learn a little bit about guys like KJ (Henry) and (Justin) Mascoll and Darnell (Jefferies) and XT (Xavier Thomas). It's been great to build a relationship with those guys because I wanna leave Clemson better than I found it and give them all my knowledge. There is no doubt that those guys will be able to carry on the tradition.”

A budding superstar is Thomas.

“Obviously, he has some natural, freakish ability to do things that most people can't do,” Wilkins said. “That has obviously been fun to watch. And he loves to compete. On game day he is 100 miles per hour, full speed ahead, no quit and no stop. So that has been fun to watch.”

Wilkins said he hopes the younger players learned their lessons well, including how to give tough love when it’s needed and how to have a little fun along the way.

“We always have a good time, never a dull moment. And it's all love, no matter how much we get on each other or talk trash, at the end of the day we know it's all love and in fun,” he said. “There is no one else I would rather do it with. Jordan gets it really bad. Just because he's Jordan. Might be Jordan but we all get on each other pretty good. No one is safe, and if you didn't know us and know we love each other, you would think we hated each other. But it's all in good fun and it's love.”

Who will be in the next wave of leaders?

“I don't know, but whoever it is I hope they take it and run with it,” he said. “There are multiple guys that could do it. KJ has that kind of outgoing personality, for sure, but I don't know who it will be because all of those guys have great leadership qualities and thing they bring to the table.”