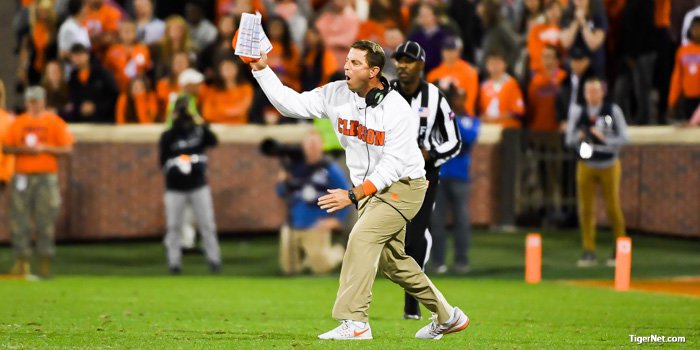 Swinney was upset with the officials more than once Saturday

CLEMSON – Saturday’s loss to Pitt was a season-defining loss.

How Clemson’s players and coaches respond will show which way it is defined – they can let the loss continue to haunt them, they can make mistakes by the bushel and lose another game, or they can respond like a champion.

There’s no way to sugar coat it – the loss to the Panthers is a bad loss. Pitt has a decent football team, and their slightly off-center and maniacal head coach will scream and thump his chest about heart and desire and toughness, etc, etc. If that sounds familiar, it should….it’s been a calling card of Dabo Swinney’s for a while now.

Pitt has had some tough losses and they were probably a little bit better than their 5-4 record, but it’s still a team that lost by 23 to a pedestrian Miami team a week ago, and they still don’t have the athletes Clemson. Now, when talk arises of the College Football Playoff, people can point to Louisville and say they lost to Clemson head-to-head, but they also lost to a top five team on the road. Clemson lost to a 5-4 Pitt team, at home. Pitt isn’t a blueblood program – they’re a team that plays in front of a few thousand fans in an NFL stadium off campus.

Not the best loss to have on the old resume.

Swinney was upset with the officials more than once Saturday "

As Nikki and I walked back to the pressbox following the postgame interviews, however, a thought popped back into my head, one that had been rumbling around in those open spaces all season. This loss – what happened on the field against Pitt on Saturday night – has been building for the better part of two seasons. It was going to happen sooner or later, and it happened on Senior Day on a picture-perfect day.

This football team – this program – has been walking the proverbial tightrope for several games. They made it to the title game last season despite being one of the worst teams in the country in turnover ratio. They won despite making critical mistakes, and they won with sometimes abysmal special teams. But they kept winning, and all of the negatives were swept under the coach-speak rug as media and fans alike were reminded that things can’t be too bad, because this team is 5-0 or 6-0 or 12-0 or, gasp, 9-0.

Clemson avoided an early-season loss at Louisville last season, let Notre Dame hang around in the rain, kept Syracuse in the game in the Carrier Dome, let a horrendous South Carolina team stay within five points at the final gun and mistakes kept North Carolina in the ACC title game in Charlotte.

This season, there have been close calls against Auburn and Troy and Louisville and N.C. State and Florida St., Clemson’s mistakes keeping opposing teams in the game long after they should have been put away. But the Tigers always found a way to win, an aura of “we can win no matter how many times we screw up” began to form. That misconception was shattered against Pitt.

Swinney basically echoed those sentiments several times in his postgame press conference, stating that “prosperity is a terrible teacher.” It’s hard to learn the tough lessons when you’re 5-0 or 9-0 and believe you’re gonna win no matter what.

And Swinney is just as culpable as any of the players – late in the game on fourth down, sometimes you have to be like and NFL coach and take the safe play. Make the punter do a rugby-style kick that can’t be returned, pin the opposition deep and make them drive 85 or 90 yards for a score. Instead, Pitt had a short field and made Swinney and the Tigers pay.

Ok, so that’s the bad and the negative. Now for the good that can come of this.

Like I said, this loss has been building for a while. You can’t continue to make the critical mistakes the Tigers have made – in abundance – and hope to keep winning each week. That lesson, hopefully, has been learned and learned in humiliating fashion.

I’ve been telling a few friends for a while now that this kind of loss would happen, and I was afraid it would happen in a playoff or title game. Instead, it happened in the regular season, and there has to be hope that they can learn from this and be the kind of team Swinney and the fans expect and want.

Can they make the playoff? Yes, but there are no longer any absolutes. The only absolute was winning out and being 13-0 at the end of the ACC Championship. This team now has to claw and fight and find a way to beat Wake Forest and South Carolina – and win convincingly – and then win the ACC title and hope for the best.

Prosperity is a terrible teacher, but a kick in the teeth and desperation are a great motivator. How will this team respond? How will this loss define the season? Do you respond like a chump or a champ? It’s up to those players and coaches to come up with the answer.