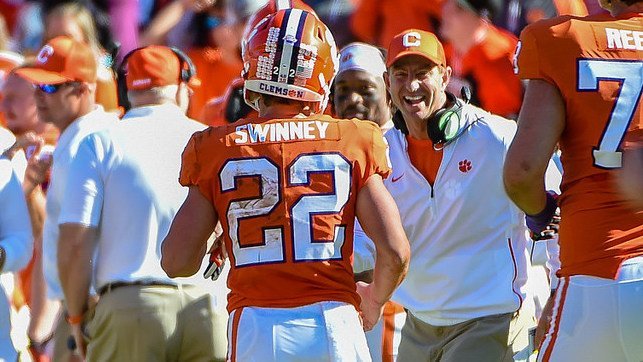 CLEMSON – Dabo Swinney has won conference championships, big bowl games, and a National Championship during his playing and coaching career. Will Swinney, the oldest son in the Swinney household, has done something his dad never accomplished – score a touchdown.

Will Swinney scored the first touchdown of his college career last Saturday in the win over Louisville, taking an eight-yard shovel pass from Chase Brice and scoring the touchdown. It was the third opportunity he’s had to score a touchdown this season – he dropped the ball on a fake field goal against NC State and had the ball ripped out of his arms on an apparent score against Florida St.

He finally got his score against the Cardinals.

“Well, third time’s the charm, I guess. For sure, after the N.C. State game I was happy we won but super disappointed in that. I felt super ready for it and stuff, but it was just a simple mistake of just taking the catch for granted,” Will said. “But I took responsibility for that ... I still just said, ‘All right, just keep working.’ So it was awesome to get it this week in that same end zone. I really just feel like I’m thankful that God blessed my hard work in that moment.”

The touchdown gives the son one more than his old man, but Will says Dabo doesn’t offer a concession.

“He says he would have scored tons of touchdowns in this offense,” Will said with a smile earlier this week.

Will says he won’t stop with the one score – he will continue to work hard and earn opportunities for playing time.

“It’s better to be ready without an opportunity than to not be with one. I know that I can help this team,” Will said. “I just try to work hard. I know that there’s a lot of improvement I have to do. I’ve already seen a lot of improvement, so that’s encouraging. Just whatever I do, I’m gonna work my hardest and try to glorify God with that. That’s just what I strive to do.”

His work ethic hasn’t gone unnoticed by his teammates, many of whom celebrated after the score.

One of the first to greet him was freshman receiver Derion Kendrick. Kendrick is the only scholarship receiver not redshirting this year who has yet to score a touchdown, but he was still happy for Will.

“One of my favorite pictures was watching DK standing up there celebrating whenever Will scored ... Here’s DK, a freshman, four- or five-star coming in. I think he’s the only wide receiver that doesn’t have a touchdown yet ... and here he is celebrating Will getting his first touchdown,” co-offensive coordinator Jeff Scott said. “I think No. 1, that says a lot about the unselfishness of our team. No. 2, I think it says a lot about the respect that our team has for Will. He’s an extremely hard worker.”

Scott says Will works harder than many of the scholarship players.

“He probably stays out here later than any wide receiver that I have, him and Amari (Rodgers). Sometimes I have to tell them to call it a tie and go in because they have study hall. They want to see who can be last out here running routes and that type of stuff,” Scott said.

“We don’t have an asterisk next to Will’s name because of what his last name is. He’s respected on our team because of the way that he goes about his business. He takes notes in meetings, and he works for his opportunities that he’s been given.”