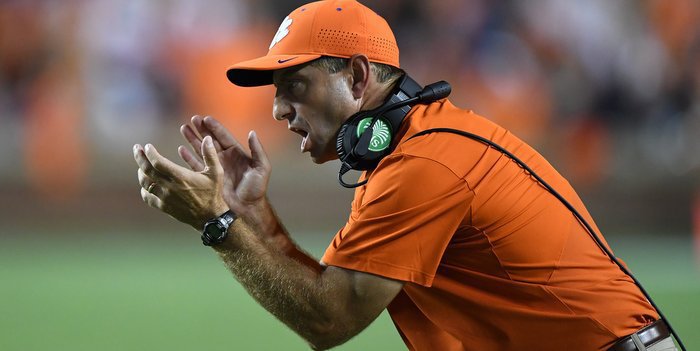 CHESTNUT HILL, MA – You can forgive Clemson’s coaches and players if they woke up Saturday morning and took their time in getting a grasp on what day of the week it was.

Yep, it’s been quite a ride for a team that started out the season playing at 9 p.m. Eastern time at Auburn, had two noon home starts, followed one noon start with a Thursday night at Georgia Tech, a late start against Louisville and the strange decision by the Atlantic Coast Conference to play games on Friday that ended with the Tigers crushing Boston College Friday night at Alumni Stadium.

Following the Tigers’ win over Louisville in which the defense played 99 snaps, the Tigers were back on the practice field last Sunday (which was a football Monday) with no time to rest, rehab or refuel.

The good news – Clemson doesn’t have any more regular season games that don’t start on a Saturday, they have eight days to prepare for N.C. State and that is followed by an open week.

Head coach Dabo Swinney told the media after the game that by Tuesday he was worried how his tired team would respond to yet another short week.

“Tuesday, I was a little worried because bless their hearts, on Sunday and Monday I think we were all running on adrenaline, just the high of the (Louisville) game,” Swinney said. “The practice was excellent, but like I said, Tuesday everybody just hit the wall, coaches and players. I told our staff, ‘Hey, everybody has to get some rest. Tired work is not good work. So I just cut the practice schedule, cut the periods, just tried to do everything I could to kind of manage the week, because it truly wasn’t a normal week for us, and they didn’t have a day off.”

Freshman defensive tackle Dexter Lawrence said the coaches made it easier to get ready for the Eagles.

Swinney said the message to his team was simple – he would take care of them.

“I just kind of kept telling them, ‘Hey let’s grind through this and I’m going to take care of you, let’s get our work in and get a good plan,’” Swinney said. “We’re going to get rested up. So they got a little rest because we came up here early and they got a chance to rest and obviously got a chance to sleep in this morning. But they were ready to go. They really were.”