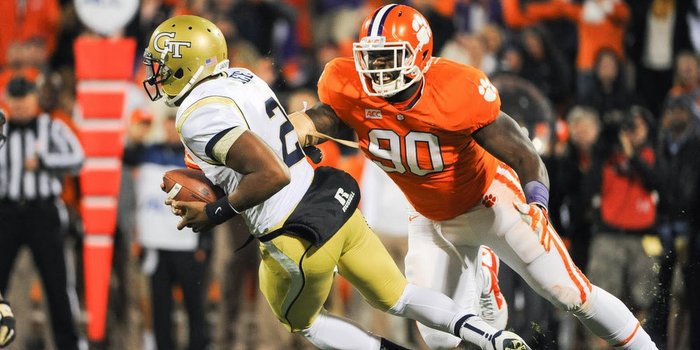 Dabo Swinney
Head Coach
View Full Profile has been waiting to bring out the Air Force but this weekend’s weather forecast might mean the Tigers will have to use the Navy yet again.

The Tigers have yet to unleash an aerial attack – a big lead and the weather meant the Tigers ran the ball in last weekend’s win over the Irish. This weekend’s early forecast is calling for more rain, and Swinney said it might be a Navy game yet again.

“We're well-prepared for that,” Swinney said after Wednesday’s practice. “Coming into this game (Notre Dame), I was telling the team, 'Alright boys, time to bring the Air Force out.' It's time to get the Air Force going, and we end up calling in the Navy because of the situation. I haven't even looked at the weather, so it really doesn't matter. Whatever. We'll be ready to play no matter what.”

Clemson plays option-oriented Georgia Tech this Saturday – kickoff is set for 3:30 p.m. – and Swinney said he’s been pleased with his team’s focus this week.

“It's not a hard group to refocus because we just do what we do. We're very consistent in how we prepare regardless of the previous week,” he said. “If best is the standard and a one game season mentality, windshield mentality, then it really doesn't matter about the previous game whether it was a win or loss. We just keep moving forward. All you have to do is turn on the tape and you immediately have respect for Georgia Tech. It's a good football team.

“They beat us last year and they're confident they can beat us again. We've got to play well. This is a football team that has to play well. We've proven that we can find different ways to win and that's something we have a lot of confidence in. We're not a team that can just show up and go through the motions and think we're going to win. It doesn't work that way. We've got to earn everything, and that's our mentality. They know we'll have to show up and play a great game to have a chance to win.”

Clemson turned the ball over three times in a 28-6 loss at Georgia Tech last season, and Swinney said the key to being successful against Tech defensive coordinator Ted Roof’s defense is simple – take care of the football.

“Take care of the ball and don't throw it to them. That helps when you don't score for the other team,” Swinney said. “We were blazing out of the gates, just up and down the field. We were off to a great start and the next thing you know we've got two pick sixes. It was a great lesson because Cole (Stoudt) wasn't ready to play. He just wasn't ready to play mentally or emotionally, and he came in and had a bad game. That's a great lesson for everybody. You've got to always be ready.

“You never know when you're going to get called into the game. We made some poor mistakes. The defense played pretty solid - held them to a couple of field goals which is a win when you're playing Georgia Tech. It was one of those weird games that got away quick and we weren't able to get it back. Possessions are at a premium in this game just by the nature of what they do becuase they're a four-down offense from goal line to goal line and they don't punt very often and they work the clock. You turn it over, you're in harms way.”

Austin Bryant
Fr. Defensive End
#91 6-4, 268
Pavo, GA
View Full Profile will miss this weekend’s games. Register has yet to play this season, while Bryant was injured against Notre Dame. Register has returned to practice, but a further evaluation on his playing status will be made next Monday. Bryant won’t practice this week but should return Monday.

The good news is that defensive lineman Dane Rogers