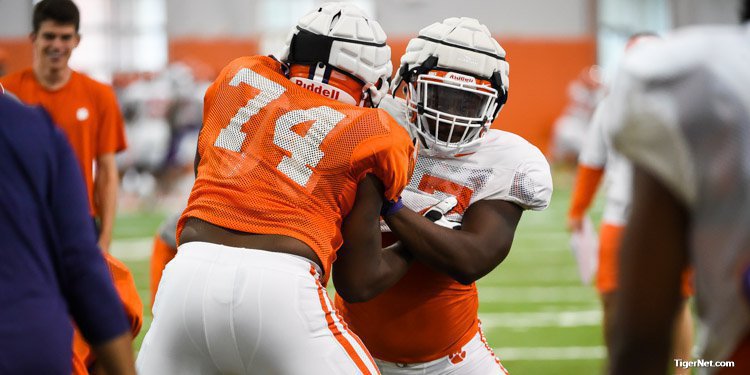 Elliott said there are two extremely tight races on the offensive line.

CLEMSON – The Tigers are entrenched in the dog days of fall camp and practiced for the third consecutive day Wednesday, but they’re also taking time to watch their former teammates.

Clemson wrapped up practice Wednesday evening – its second day in full pads – and will prepare for a morning practice on Thursday, and while everyone is focused on the upcoming season Tony Elliott said they’re all excited to see the Texans and Panthers and will celebrate with a little tailgate party.

“It’s a special opportunity. We’re going to make sure as a team that we take a little time and honor those guys and watch,” Elliott said. “We’ll watch it together, but at the same time we’ve got a quick turnaround. As coaches, we’ll watch some of it, but then we’ll make sure we’re ready for tomorrow morning’s practice.”

Will Ben Boulware get a shot on Deshaun Watson?

*Elliott said none of the three running backs have really differentiated themselves.

“They understand it may be by committee, but they are all making their statements to be the guy,” Elliott said. “They’re pushing each other. I feel like Tavien Feaster has really come on the last couple of days. Adam Choice really shot out of the gate and his first couple of days were really, really good. C.J. Fuller has been steady, but I think Tavien is putting some pressure on him.”

*Elliott said the coaches are trying to spread the reps out evenly amongst all of the quarterbacks.

Elliott said there are two extremely tight races on the offensive line."

“Right now we’re pressing them all and giving them all the opportunity to see the offense to see who can manage it,” Elliott said.

*One of the biggest questions coming into fall camp was where the leadership would come from on offense. Elliott said Milan Richard and D.J. Greenlee have really stepped up from a leadership standpoint.

However, there are several of the offensive linemen who are also taking over that leadership role and Elliott hopes that Ray-Ray McCloud and Deon Cain and be the voices in the wide receiver room.

*Freshman running back Travis Etienne had a huge adjustment to make coming from high school to Clemson.

Elliott said Etienne came from a huddle, option offense, so learning new terminology and running an no huddle, up-tempo offense was a big change.

*There are two extremely tight races on the offensive line. Right tackle Sean Pollard is being pushed by Tremayne Anchrum and John Simpson is pushing Tyrone Crowder.

Renfrow said that while K’Von Wallace is an extremely physical guy, O’Daniel is the guy he’s been most impressed with throughout fall camp.

He continued to say that Clelin Ferrell is a great player, but Justin Foster has really caught his attention because he has the best hands he’s ever seen.

Elliott said the scrimmage is extremely important for everyone to show their knowledge of the offense because it’s the first time all of the coaches will be off the field.