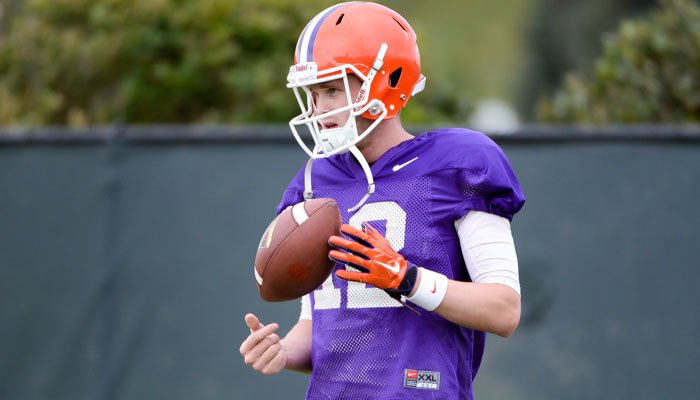 Nick Schuessler will play for both teams in Saturday's spring game.

CLEMSON – The first team defense went against the second team offense – and vice versa – as the Clemson football team held another full-scale scrimmage Wednesday afternoon in Death Valley. The next time the Tigers take to the field in the stadium will be in Saturday’s spring game.

Dabo Swinney
Head Coach
View Full Profile said the rosters have already been filled out for both teams – Orange vs. White – and the “head coaches” for the two teams will be defensive coordinator Brent Venables

“This will be a very competitive spring game,” he said. “Very balanced on both sides, just because we have 15 mid-years. I think it’s good to create that game-like atmosphere as best you can. I think that is good for their growth and to see how they perform under the lights. We are performing under the sun but it’s the same thing. We are going to do live kicking situations and we have some return guys we need to find out a little bit about. And we have some young guys from a coverage and protection standpoint that we need to put a little pressure on.”

Artavis Scott
So. Wide Receiver
#3 5-10, 190
Oldsmar, FL
View Full Profile will also get a look. He then mentioned that incoming freshman Ray-Ray McCloud

Carlos Watkins
RS Jr. Defensive Tackle
#94 6-3, 295
Mooresboro, NC
View Full Profile blocked a field goal during the scrimmage – the second week in a row one has been blocked – and Swinney said the field goal protection is a concern.

“It really is, because I don’t have Kalon Davis and David Beasley in there,” Swinney said. “They can’t get a sixth year. But we are mixing and matching and trying to find the right guys in that spot. It’s a thankless job.”

*Co-offensive coordinator Tony Elliott said the first team moved the ball and made plays in the passing game and the running backs hit some big runs.

-Elliott also said that the second-team offensive line went against the first team defense some. Afterwards, the offensive line had to run the hill and could be seen doing crunches at midfield.

Kevin Dodd
RS Jr. Defensive End
#98 6-5, 275
Taylors, SC
View Full Profile ) in camp and has been learning the ropes. He also said he weighs in at 256 pounds and thinks that is a good playing weight. When I asked what he has been doing to stay consistent he surprised me – Yoga. He said he tries to do it two or three times a week and that former quarterback David Olsen got him started.

Scott is a different kind of cat, and I asked him when it “clicked” for him last season.

“I came in confident and knowing that I could play this game,” he said. “If you have doubts you won’t succeed.”

When I asked if he had goals or what he wanted to do better than last year, he reply was simple: “I just want to get better. Last year’s stats won’t win games this year.”

"Trevion has done a really, really good job. Over on scout team, you don’t get as many reps, but he’s done a good job of picking up the playbook. He’s made strides. Shadell has had that wide eyed look at little bit but you see the natural ability. He’s caught about every ball that’s been thrown his way, but getting him to be consistent about his assignments is the big thing but that will come this summer."