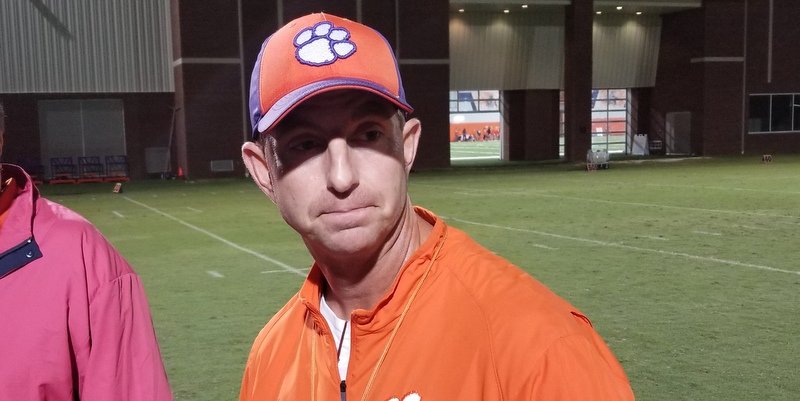 CLEMSON – Clemson’s kicking situation is in a state of flux, so head coach Dabo Swinney brought an engineering student-kicker to practice Wednesday on what he jokingly called a 10-day contract.

Alex Spence is just 2-for-6 since replacing Greg Huegel at kicker, so Swinney reached into the student body for a kicker who played his high school ball at Bishop-England and almost won a spot two years ago before Huegel took the job.

“We brought a new kid out today. I told him he's on a day-to-day contract, kick-to-kick contract,” Swinney told the media after Wednesday’s practice.”The NBA has those 10-day contracts. I said, you're on a day-to-day, kick-to-kick. He's actually a really good kid. His name is Drew Costa. He tried out two years ago and we really liked him in the fall but we didn't have a spot. We inventoried him and we told him we'd bring him back in the spring. We brought him back in the spring and he had hernia surgery so he couldn't kick and that's when we found Huegel.

“Then we bring Huegel out for fall, and we didn't have another spot for another kicker, but he's always been right there on the fringe. He's a senior, and it's the first time out here today. I introduced him to the fellas, and it's like Tuesday practice in the NFL. On Tuesdays in the NFL, they're bringing people in to take your job. I'm bringing somebody in to see if we can get our guys better.”

Swinney said he still has confidence in Spence.

“The thing about Alex is that he can do it. Sometimes it just takes guys a little longer to transition to the field,” Swinney said. “Ya'll remember Cat (Chandler Catanzaro). He couldn't make a kick as a freshman. Alex hasn't had a lot of work. It's a big task. Even though he's been around, he hasn't played. He has to punch through that mental hurdle. Physically he can do it. I know he made a couple of bad kicks the other night that didn't even look like kicks, but that's not him.

“That's more the moment is kind of winning on him right there. He can physically do it and Groomes can do it. Both of them are competing and we've got a third guy in there and we'll go from there. We've got (Jamie) Skalski warming up in the bullpen. We've got Ryan Mac Lain out here kicking. It's tough sledding right now.”

The Tigers hosted a special guest after practice.

“Clary Miles, the young man that went off the cliff there, reached out to me and he wanted to come out and see the team and have an opportunity to thank the guys and the training staff and tell his story and what he's been going through the last couple of weeks,” Swinney said. “Pretty surreal moment out here. He is on a walker and lost a lot of weight, but it was good to see him healthy.”

“Today was a tough day out here. It ain't fun to lose. But if you don't have any adversity and you win every game and you never lose or never fail, then you kind of depend on yourself. But when you have adversity in your life it makes you focus and depend on the things that matter. That's how I've always lived my life. And you get better if you're made of the right stuff. We've done a lot of work on Clemson and did some live scrimmage work today. We've had some tough meetings and a lot of comments that are healthy for the team. Tomorrow will be another good day. I'm glad they get a break. I'm glad the coaches get a break. Just to recharge and see if we can charge back up the mountain. We didn't get knocked off the mountain. We had some safety gear s0 we're still on it. We've got to turn around and charge back up - not tiptoe, let's charge back up the mountain and see if we can go win the next game somehow, someway and go from there. They have responded and hopefully, they'll continue to as we move through the next few days.”

Will Marcus Edmond be back for Georgia Tech?

“I hope so. I'm cautiously optimistic. He's doing the most this week that he's done and if he can have another couple of good days and some more time off this weekend, I think we're going to really ramp it up next week and see where he is. He didn't break a bone, but he might as well have broken a bone. He probably would've been just as easy to heal. He's much, much better and the closest he's been. This has been our target for a while, but we'll know more next week. We're going to get him back sooner rather than later at this point.”

Has he made a decision on tight end Garrett Willliams?

“He's doing good. He went live today. He was the quarterback in the scrimmage. I wanted to see some of our second and third team guys go live today. He's doing fine. He's the fourth guy. It's Kelly, Zerrick is two and Hunter is right there. Hunter just has to continue to get command of the offense and then Tucker.”

Bryant was in a yellow jersey and didn’t practice, but Swinney said earlier in the day that Bryant was responding well to treatment.