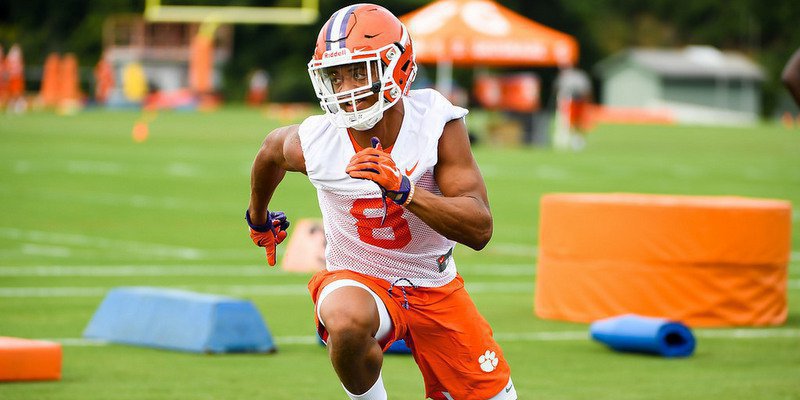 CLEMSON – As the first week of fall camp comes to a close, Brent Venables met with the media for the first time to discuss everything from depth – or a lack thereof – to some of the newcomers to the Ray-Ray McCloud at cornerback experiment.

Venables talked for almost 15 minutes Tuesday evening inside the indoor practice facility and said that he’s excited for what’s to come in fall camp, beginning with Saturday’s scrimmage as players begin to show growth and separation.

“I think what you'll see over the course of the next week is guys starting to separate themselves,” Venables said on Tuesday. “I think we'll have more clarity on who's ready to play and who still needs work. It's a great teaching time and it's a great opportunity for us to evaluate mentally mature guys - guys who can handle the grind, embrace the grind, that fight through the tough part of fall camp.”

Undoubtedly, the first question was about McCloud and his time at cornerback, and Venables said he wasn’t surprised at how well the junior wide receiver has taken to the new position. However, the extent to which we see McCloud on defense is yet to be determined.

“I would say it's a possibility. You want to utilize your players on your team -whether it's a situational thing or an all-time thing. If he's better than anyone we've got and on the other side there are a handful of you that are all really, really good, then it just makes sense,” Venables said. “He's got a good skillset and it's something that I think he's excited about. He's got a lot of natural knowledge, understanding of the game, speed quickness, physicality out there. He looks good. If that creates more competition and turns up the heat on guys, great. That makes everybody better. Don't be stubbing your toe. Don't be pulling a hammy. It gives you good competitive depth. Through a couple of days, he's definitely got a good skill set and a lot of natural ability to do it.

“He's learning a new language. He's very, very natural there and comfortable. He's instinctive, tough, physical, competitive - what you thought he would be. We offered him as a corner out of high school, so we just let him play wherever he wanted.”

Venables touched on several players and their progression since spring practice as well as a few of the freshmen who have caught his attention.

“We're hopeful (Huggins can be an impact player). Albert has done some really good things in camp. We're hoping that he can be consistent, like all of our guys. We want them all to be consistent. The guy can bench press this building but you've got to strike people with these (his hands). He just has to be consistent with it and when he does, he can dominate anybody. You neutralize yourself when you don't play with your fundamentals so just getting him to trust those and come out every day with the right mindset. He's done pretty well so far.”

“More than anything, confidence. A feeling of I belong and I've worked hard to create this opportunity for myself. The guy is super competitive and he's wide open when he steps across the line. Very focused. Prideful. Tough. Great teammate. Good leader. He cares. Those are all great intangibles. I didn't say anything about 6-2, 225 and 4.4. I'm talking about intangibles and guys who love it, are passionate about it, care, selfless and with that, you can win a bunch of games. I've been pleased and I'm happy for him. He's worked really hard and has been patient.”

“Shaq has done really well. He's been cross training. He's made a lot of improvement. The knowledge he's continued to acquire. The things he's done in the weight room - flexibility, strength, his lower body strength, in particular, has been very noticeable. He's playing physical and fast and playing multiple positions, which is not easy to do, but he's put in the time for it.”

“He played all over for his team. He played Wildcat, nose guard, d-end, defensive and offensive lines. He played everywhere so he's a good athlete. He's got good size, good quickness. He's smart and intelligent. He's a hard worker. Every day he's after practice. He's got a good of D-linemen who really want to work off the field on their skill set and fundamentals. The more you work them, the more natural and instinctual they will become. He's bought into that and in time he's going to be a really good player.”

Venables likes what he's seen out of Jordan Williams

“Long, instinctive, good ball skills, excellent speed, very competitive, tough, super coachable. He's still got a lot of stuff in front of him. He's just now getting comfortable with the new language. He's very natural with a lot of things that he does, but he's just learning. Things go very fast at practice, so it's our job to get things to slow down for him. He's coming along and doing well.”

“He's very well coached and that jumps out to you. He doesn't get overwhelmed. He's got a lot of confidence. He's done well. He's got to add some size and strength out there. These receivers that he's going with out there - even our slots - are big, physical guys. You can be in a competitive position, but you lose the battle because the guy is a third or fourth-year player and he's just stronger. A lot of the same things like A.J. He's trying to get the calls down and how that applies to me. When we're in three deep zone, don't play man-to-man. If we're in two-deep, stay in the flat. It's just things like that. I've been pleased with his attitude and work ethic and skill.”