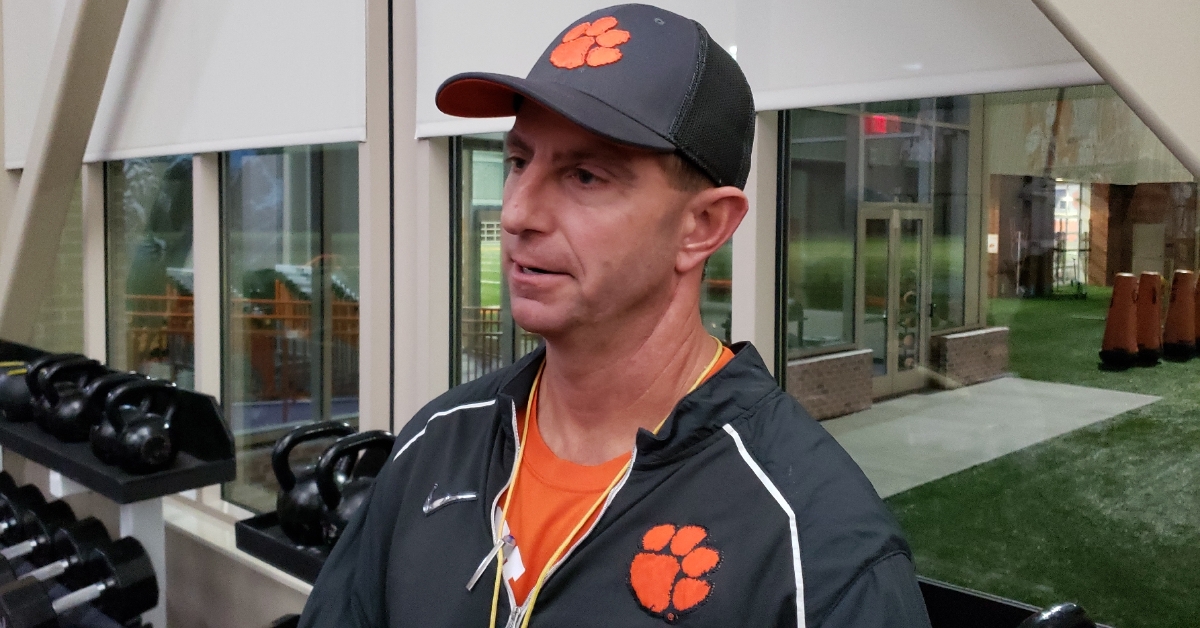 CLEMSON – Dabo Swinney always has a plan, even when it comes to his sideline attire.

No. 3 Clemson takes on Wake Forest Saturday in Death Valley on Senior Day (ABC, 3:30 pm). The Tigers are 10-0 overall and 7-0 in the ACC and have moved into the “championship phase” of the season. That started with the Tigers breaking out the orange britches for last Saturday’s win over NC State – Wake lost earlier in the day at Virginia Tech and the Tigers clinched the ACC Atlantic with the win over the Wolfpack.

Swinney is known for his late-season sweatshirts, but there is more to it than that – he switches his hats to the traditional block C when the calendar turns into November.

“It's November. Any time you get to November, I switch to the Block C,” Swinney said Wednesday night after practice. “I have been doing that a few years now. I guess it's been a few years - back in 2015 or 2016 - I started breaking the year down into phases and helping us focus a little bit. Again, November is the championship phase for us. So far, we've been in the division hunt and the ACC Championship hunt, but even if you weren't, you've still got the state championship. It's our championship phase and we are trying to earn the postseason. Even if we aren't in the playoffs, we are trying to get into some kind of postseason bowl and win that championship. That is a championship of its own. That has been how we've broken it down.”

Swinney broke out the sweatshirt in Raleigh Saturday but wanted a winter coat. In the end, he was cold because he was afraid he would lose his man card.

“I've been wearing a sweatshirt for a long time. I've always worn a sweatshirt when it gets cold,” Swinney said. “I just don't like a big old heavy coat. I almost broke out a heavy coat (Saturday at NC State). I was cold, and I looked around and nobody else had on a big, heavy coat there in the fourth quarter. It was just kind of cold, and I was afraid I was going to lose my man card. (Equipment manager) Abe (Reed) had it ready, but nobody else did, so I was like, 'Well, I am wearing a sweatshirt for the whole game here. I am just going to have to be cold.' And then they threw Gatorade on me and I was really cold.”

“Oh man, he is a great player. You hate it for them. He is a really, really good receiver. Great ball skills and great skills off the ball. That is a tough loss for them for sure. They have a good group of receivers and have solid depth, but he is a difference-maker.”

On moving up to No. 3 in the rankings

“Yeah, lose this week and it doesn't mean anything either. Remember George Jefferson? We are movin' on up. We are fortunate that it is November and we still control our own destiny and there are a lot of teams out there that don't. They are not necessarily out of it, but they aren't driving the car. They are a passenger. We are in a good spot. We just have to continue to play well. We have a huge challenge ahead. It will take three more great games from us to solidify ourselves and that is the way it ought to be. You have to earn your way there.”

“I think he has one game left and we are just kind of sitting on it. We will try and hold it as long as we can. You would like to get through the ACC Championship Game if you could and if you're fortunate enough to get into the playoffs it's good to know that you would have another guy if you had to have him. Jaelyn Lay is the same way. Keith Maguire, he has one left. There are a few guys we have been holding - Aidan Swanson has two left. He is also a kickoff guy, so if something happened to Potter he would be a difference-maker. So we are holding a few guys and we have a few others we will go ahead and play if the situation arises where we can play them.”