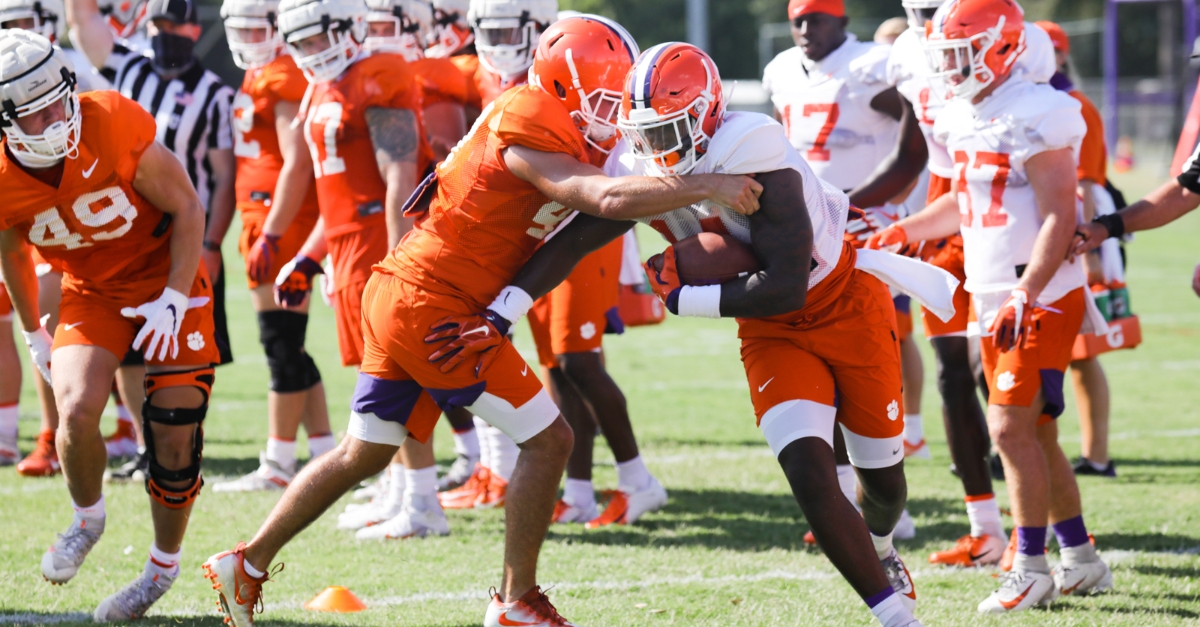 Swinney smiles at a player during Wednesday's practice. (Photo courtesy of CU Athletics)

CLEMSON – Dabo Swinney continues to say he has a good-looking football team, and Wednesday’s practice at Jervey Meadows did nothing to dispel him of that notion.

The Tigers held a spirited “WIN” drill, where players go one-on-one, in shorts and pads. They will be in full pads Thursday, Friday, and Saturday. The first scrimmage of the fall will be held Tuesday, the final day of fall camp with classes set to begin next Wednesday.

*Defensive tackle Nyles Pinckney is a full-go in camp and looks good.

*He was asked about the Big Ten and Pac-12 not playing football and extended sympathy to his fellow coaches. When he was asked if that affects how a championship should be perceived, he said no.

"You pick the four best teams and play. In my opinion it doesn't change anything,” Swinney said. “Whoever wins it, wins it. That's the champion. You best believe whoever wins it has to earn it. They ain't going to give nothing to nobody."

*Swinney was asked about safety Lannden Zanders and wound up raving about the entire secondary. 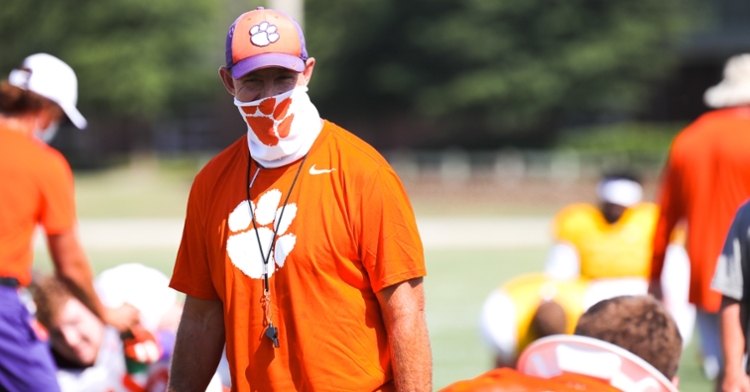 Swinney smiles at a player during Wednesday's practice. (Photo courtesy of CU Athletics)"

"He's been awesome. I tell you what, Brent (Venables) and I were talking about it the other day,” Swinney said. “This is probably the deepest, most coachable group we have ever had in back seven. Super, super pleased with what we have at safety. Nolan (Turner) is like a coach out there and he's playing fast. Zanders has really, really separated a little bit. Jalyn Phillips, Ray Thornton, Joseph Charleston, man those three guys are going to play a lot. Have potential to be starters for us."

He would love to see someone nail down the nickel spot, however.

"We have more options there than we have in a long time,” Swinney said. “Think it's going to come down to how it shakes out at corner. Could be Mario (Goodrich), could be a young guy like Greene. Couple safeties that could do it well. Think we just gotta let it battle out. Brent has a good feel for where we are with the candidates. Think that we are going to have a lot of flexibility at that position."

*Clemson is deeper at tight end than it was a year ago.

"It's definitely one of the best positions on our team. Braden Galloway has some great football ahead of him,” Swinney said “He's really going to be a problem for a lot of people. And then Davis Allen is one of the most improved people in one year's time that we've had come through here. Looks like one of them Pittsburgh Steelers type guys. And Jaelyn Lay is one of those guys that you will look at in year four or year five and you will wonder where he came from. He has a high ceiling, but he isn’t there yet.”