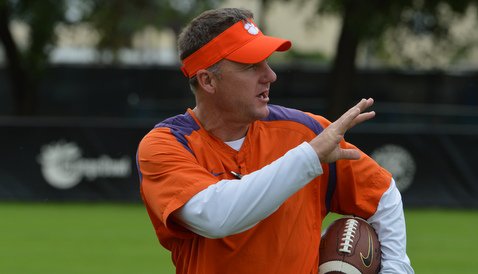 The Tigers held their last practice before Friday’s Orange Bowl against Ohio St. on the practice fields at Barry University, and the team will take Thursday off before facing the Buckeyes on Friday.

“This was the last practice for these seniors, and we are just trying to finish on a high note,” Boyd told TigerNet following practice. “We just want to finish on a high note. That’s the biggest thing for this game is finishing strong, leaving a legacy and making sure these guys are able to build off of that momentum heading into the off-season. These have been a great few weeks of preparation. We have enjoyed our time together and are just trying to finish up.”

“It’s bittersweet that it’s the last practice and telling all of the guys goodbye and good luck in the future. It’s kind of sad, but it’s exciting at the same time,” Thomas said. “My class - the guys in my class have helped this program out a lot. The “Dandy Dozen” came in and changed the program, especially with Coach Swinney’s help. He has really changed the program into what it is now. Without that, I don’t know where we would be.”

Boyd said the team used the last few practices to “polish things up.”

“We got a lot of the physical work done earlier in the week, and now it’s all mental,” he said. “Whatever we needed to get done in these last 48 hours before the game. It was all details and mental reps, understanding the game plan.”

Boyd said the news that Buckeye defensive end Noah Spence, who was suspended for three games for a violation of B1G conference rules, won’t change the way the Tigers approach the Ohio St. defense.

“They are Ohio St. for a reason,” he said. “They recruit the best players in the country year in and year out. The next guy will step up.”

Thomas said he was disappointed to learn of Spence’s suspension.

“I am a little disappointed. I was looking forward to going up against him because he’s a good player,” Thomas said. “I know that 34 [Jamal Marcus] or 88 [Steve Miller] will play well.”

Wide receiver Martavis Bryant told the media that he would have a decision on whether he will return to Clemson or turn pro by next Sunday or Monday. When Bryant was asked what grade he received from the NFL, he told the media it was nobody’s business.

“It’s a possibility that [this might be the last practice]. It will probably be Sunday, the sixth (Monday is actually the sixth)when I make my decision,” Bryant said.

Swinney was asked if Wednesday was Bryant’s last practice, and he said, "It's a possibility, but I don't know right now. He's got all the information. He's got to make the decision that's best for him."

Swinney then said that while he supports whatever decisions his players make, he would hate to see a player make the wrong decision.

"As long as they've got all the factual information, they're going to be the ones that have to live with the decisions,” he said. “But I hate to see a guy go for a discount. I hate to see anybody settle. That's sometimes what happens. But that's each and everybody's own decision."

Starting tight end Stanton Seckinger has a sprained ankle and is questionable at this point for Friday's game with Ohio State. Swinney said that Seckinger rolled his ankle walking down a flight of stairs.

One of the vistors to Clemson's practice was new Clemson President James P. Clements. Ironically, he was the president of West Virginia two years ago when Clemson played the Mountaineers in the Discover Orange Bowl. He is staying at the same hotel in the same room as he did two years ago, so hopefully that will bring the Tigers some luck this year as he was on the winning side in this game.