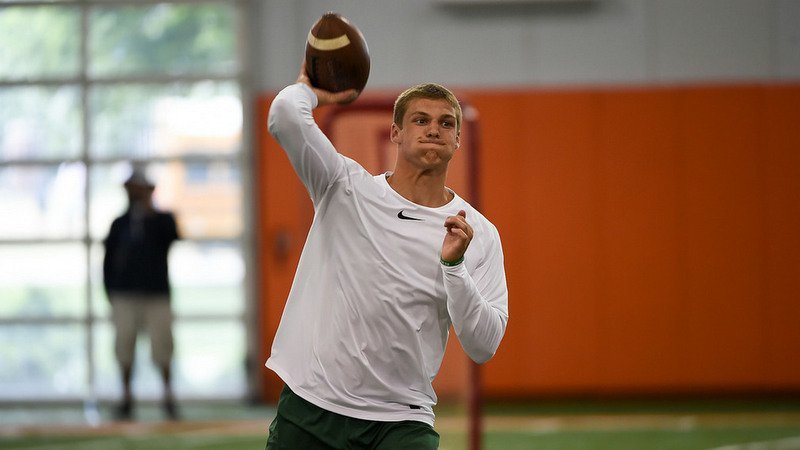 Tee Webb is the heir apparent to Trevor Lawrence at Cartersville

CLEMSON – Clemson head coach Dabo Swinney held court with the media before Wednesday's afternoon session of his camp, delaying the start for a few minutes while he discussed summer plans, but it was back to business in a hurry as the heat settled in.

We started out with the quarterbacks, where 5-star Bellflower (CC) St. John Bosco 2020 five-star D.J. Uiagalelei was on tap to participate. Uiagelelei didn’t arrive in time to throw for the media, arriving a good 40 minutes after we booted, but I was told he might throw Thursday morning.

The standout in the group – as he has been for me for a while – was Myrtle Beach (SC) 2020 signal caller Luke Doty. Doty worked out while being watched by quarterbacks coach Brandon Streeter, offensive assistant Kyle Richardson and former Clemson quarterback Woody Dantzler. Doty was in a group tha included Bogart (GA) Prince Avenue Christian 2021 Brock Vandagriff, Cartersville (GA) 2020 Tee Webb and Neptune Beach (FL) 2020 Devon Lingle.

One observer said he thinks Doty is a reach as a quarterback because of the limited film he has at the position and his height. However, he just seems to have the “it” factor whenever I watch. Will Clemson offer? Time will tell.

Webb, who will take over for some cat named Trevor Lawrence in Cartersville this season, has offers from Louisville, Kansas State and Rutgers. He has a live arm and good touch on the ball. 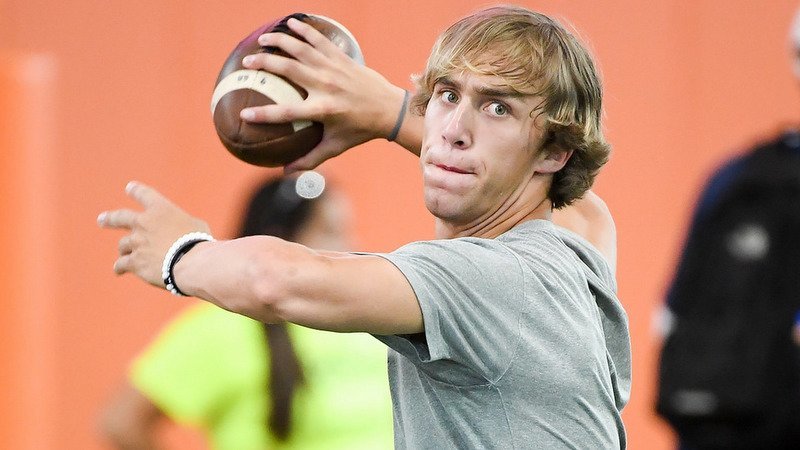 Tee Webb is the heir apparent to Trevor Lawrence at Cartersville "

*Clemson defensive back target Shyheim Battle worked out for the coaches again Wednesday afternoon. We’ve documented that Battle visits NC State tomorrow and that we think it’s a battle between the Wolfpack and Tigers for his services.

*I kept looking for River Ridge (MI) defensive lineman Ruke Orhorhoro but didn’t see him working out with the defensive linemen. I was told that he is on campus and hopefully we can talk once the visit is complete. He told me a few weeks ago that Clemson is in his final four, and he wanted to use his first visit to Clemson to see just where the Tigers stand.

*At the linebacker spot, Fort Valley (GA) Peach County 2020 4-star Sergio Allen continues to impress. As I mentioned earlier, he just has that extra oomph the coaches are looking for. But Allen wasn’t the only impressive linebacker there today - Sandersville (GA) Washington County’s Preston Daniels is a workhorse who looked thrilled to get attention from Brent Venables. He seems extremely coachable.

*Clemson defensive back Sheridan Jones was also on campus, and if you haven't seen the tweet, his mother is impressed with all things Clemson.

*Spoke briefly with tight end commit Jaelyn Lay after he left campus. When we saw him in Atlanta in late March, he was at 227 pounds. I wrote this morning that he looked bigger and could easily carry 250. He told us he is up to 240 pounds and the coaches want him at....260.

I had an AWESOME time at Clemson with @SJones3_ !! @AltriqueBarlow and his mom enjoyed the visit too. I got to meet another member of the Clemson family...@burrows_kristie. She’s so nice!! I’m so glad he chose Clemson ?? Even got my Clemson Mom decal!! CU soon?? pic.twitter.com/g8YQfNeXBz

Found the bag in the Student Center!!! Today was a good day! When he’s happy, I’m happy ?? pic.twitter.com/uBJICCaZ1G