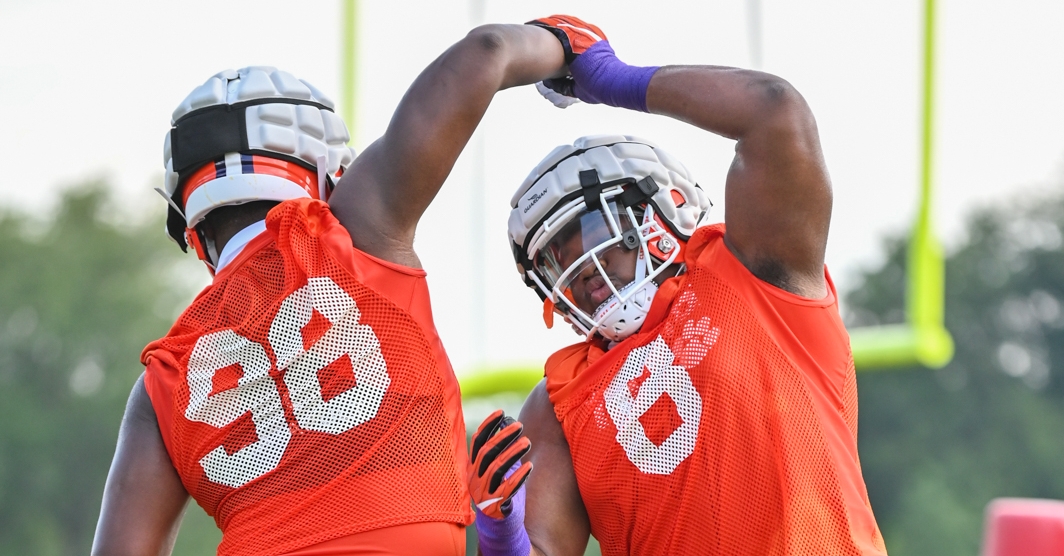 Myles Murphy (98) and Tre Williams (8) have made an impression in camp. (Photo courtesy of CU Athletics)

The Clemson coaching staff brought in one of the more impressive defensive line hauls in history with the 2020 recruiting class, and to this point, all are living up to their billing.

Bresee was ranked as the No. 1 overall player in the country coming out of Maryland, while Myles Murphy was considered a top-15 national prospect by all the major recruiting services. Four-star prospects Tre Williams and Demonte Capehart were also a part of the class, and that group has made a big impression during camp.

“Bryan Bresee, he's probably better than advertised, to be honest with you,” head coach Dabo Swinney said. “He is a really talented player but he's a very smart player. He's made huge strides. I would say the same thing for Myles Murphy. I think those two guys just make you better the moment they step on the field. Really that talented, but they're really good people. They're very smart and know a lot about football right now.

“Capehart and Tre, those two, same thing — really talented. Tre is coming off of a shoulder surgery, but Tre is twitchy and super athletic, a guy that I think is going to be a really great player here. And then Capehart is a little bit like Dexter (Lawrence) in that he's just this massive, massive presence in there. But he's still kind of doing the football foundation that he needs for all that talent that he has to really shine through. We knocked it out of the park with all four of those guys. They're going to be excellent players.”

“They have been flashing. There was a live scrimmage yesterday (Friday) and the guys really performed well. In the two-minute situation, it was the first time we've done two-minute, all three units were outstanding,” Venables said. “We did really well in short-yardage and a lot of those guys flashed in short-yardage today. And just like a lot of young guys, there are some great moments when they really flash and make some spectacular plays. They just lack some experience here and there. But it's a group of guys that like to compete and like to practice and play the game with incredible passion and intensity.”

Like Swinney, Venables was complimentary of Bresee and is playing both defensive tackle and defensive end.

“He is learning more than one spot. He is still on the shoulder of the offensive lineman so there are some differences but there are more similarities than not,” he said. “He has played both his whole life and is comfortable at both so he is playing both. Again, Bryan Bresee is as good as advertised. He has really made some improvements on his fundamentals since the spring.”

Murphy is a great pass-rusher.

“He is a little bit inconsistent but more good than not,” Venables said. “He has a great first step and really gets off the ball. He has fast eyes and very instinctual. His fundamentals are well-developed and he has great natural power and explosiveness and can really run. He has a refined pass-rush game and he knows what he is doing out there for sure. But he has a lot of work to do.”

Williams didn’t show up until summer but has been impressive during the first two weeks of camp.

“Really good. He is really disruptive and has a good first step. Has to work on some fundamental things but coach (Todd) Bates did a great job of getting him to understand what we do and the verbiage and the language prior to him ever arriving on campus and it showed,” Venables said. “He is not overwhelmed mentally. We have to get some fundamental things worked out but he can create some knock-back and his first step is very natural and he understands how to get off on the ball and that is that d-line is all about -- creating another line of scrimmage and playing on the opponents' side of the line of scrimmage and being disruptive. But you have to fit within the confines of the defense as well. He has done a nice job.”