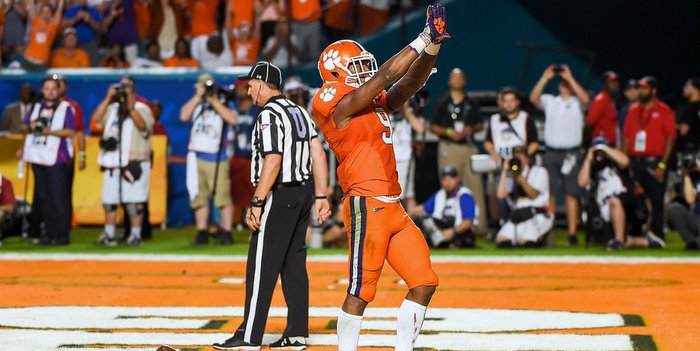 Gallman attacks everything with a laser focus

CLEMSON – Wayne Gallman will enter the season as one of the nation’s best running backs, and he has the all-time Clemson rushing record in his sights. Not bad for a kid that way too many people saw as a just another piece of the puzzle, an offer the Clemson coaches extended just so they could lure 5-star Robert Nkemdiche into the fold.

May 2012: Nikki and I drove down to Loganville (GA) to visit head coach Mickey Conn and watch spring practice at Grayson High School. We were also there to see Nkemdiche, Gallman and David Kamara, a trio of Grayson players that looked like they were all headed to Clemson.

Nkemdiche was outstanding. His physical tools were evident even to casual observers, and it was obvious why he had five stars. We left thinking Kamara had potential and might be able to help out in the secondary somewhere down the road.

And then there was Gallman: Was his offer just a way to lure Nkemdiche to Clemson? His stats weren’t eye-popping, and message boards coaches complained long and loud that Gallman would never see a significant snap for the Tigers. Some thought he would move to linebacker, and others complained that his lack of stars and stats didn’t bode well for his college prospects. 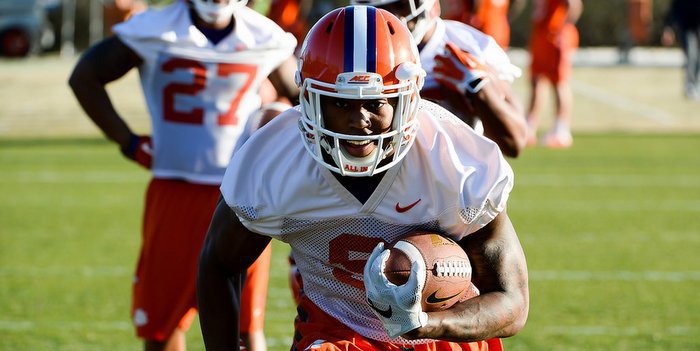 Gallman attacks everything with a laser focus "

Late in the session – on a brutally hot day that was humid and broiling – Nkemdiche moved to running back and took a swing pass out of the backfield. The poor safety merely waved him through and didn’t even bother to make a tackle. Enter Gallman, who was incensed that the safety didn’t even make an effort. Gallman lined up at linebacker, put Nkemdiche in his sights and made a jarring tackle. Before the play, many of the Grayson players wondered if Gallman would even get a hand on Nkemdiche, much less make the tackle.

We left Grayson that day, and Nikki talked about what we had seen, and she said that Gallman was not only worth a scholarship, he was really the one of the three that seemed like a “Clemson kid.” He was polite, he was quiet, and he played the game with passion and attitude.

Nkemdiche wound up at Ole Miss, had a solid career and will make a lot of money in the NFL very soon. His time in Oxford has been marred by headlines that have nothing to do with football, but he’s still extremely talented and NFL teams will jump at the chance to add him to the roster. Kamara spent two seasons with his buddy Nkemdiche in Oxford and then transferred to Tennessee St., where he was teammates with former Clemson players Ebenezer Ogundeko and Shaq Anthony last season.

Gallman wound at Clemson, wanting to prove everybody wrong.

November 2015: Following Clemson’s win over N.C. State on Halloween last season, I sat with Gallman in the WestZone, and he told me how the Wolfpack players were imploring him to just “go down when we hit you. Why don’t you just go down? Why do you have to fight us on every single play?”

Gallman laughed, and said it isn’t in his nature to give up. He plays angry. He plays with a chip on his shoulder. He read the message boards back in the day. He knows nobody thought he could play on this level. He is still out to prove everybody wrong.

But Gallman has his sights set on Raymond Priester, whose 3,966 rushing yards from 1994-97 set the standard at Clemson. Gallman needs 1,671 yards this season. Reach that number, and he will leave Clemson as the Tigers’ all-time leading rusher. Center Jay Guillermo says that’s the goal of the offensive – get Gallman to 1,700 yards.

His running backs coach said that was his challenge to Gallman entering the spring.

“That's one thing. He had a decision to make and he had the opportunity to go out last year,” Tony Elliott told TigerNet last week. “I talked to him and said, 'Let's go make you into a complete back.' We are trying to add that element of finesse, but understanding when to be finesse and when to be a power back. We've also been working on him catching the ball out of the backfield. You are starting to see him become more comfortable catching the ball out of the backfield. For his future, those are the things that he needs to continue work on.”

Having a couple of former running backs in his ear also helps.

“I can't take all the credit on that. Wayne has put in a lot of work,” Elliott said. “And then having Terry Allen and Dymon Adams here - those guys that played here and played the position at a high level - having those guys here to coach him up you're really starting to see him have a true feel for the position. That allows him to not only be the bruiser but also turn into finesse and skate and stay square and then pop. The game is really starting to slow down for him - when you talk to the best of the best they say the game is slow for them. That's what you're seeing with Wayne.”

Gallman broke a long run in last Wednesday’s scrimmage, and he had another nice play on a screen pass that turned into a long gain. It shows his progression; but Gallman doesn’t like to linger on his successes. He wants to know – who doubts me? Who thinks I can’t do this?

Go ahead and doubt him. All of you. Wayne Gallman will prove you wrong.