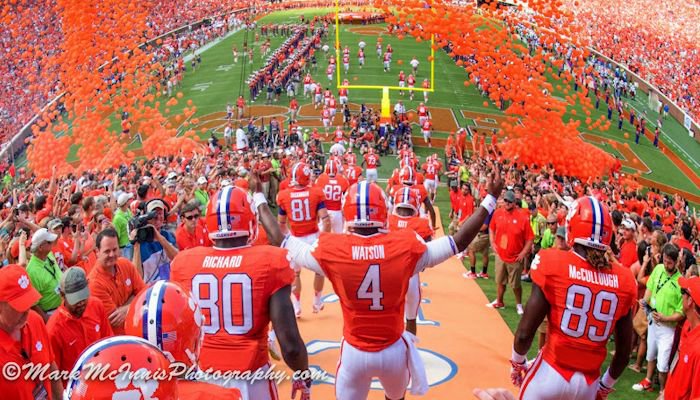 Watson goes down the Hill for the first time against SC State. (Mark McInnis)

One of the biggest topics of conversation surrounding the Clemson football team since the spring has been the starting quarterback battle.

Early on there were three names in the ring. After Chad Kelly

Chad Kelly
RS Fr. Quarterback
#11 6-2, 210
Buffalo, NY
View Full Profile was dismissed from the team there was still a neck-and-neck competition between the senior Cole Stoudt

The chatter about who should be the Tigers’ starter has only gotten louder since both quarterbacks have seen playing time and had bright moments during the first two games of the season. Heach coach Dabo Swinney

Dabo Swinney
Head Coach
View Full Profile has stated multiple times that he still believes Stoudt is the best option to lead the team, but nevertheless it’s clear that Clemson has a special player in Watson.

After Saturday’s blowout in Death Valley versus South Carolina State Watson showed the composure of a mature team player. Even though he had been imagining his first run down The Hill through a sea of orange since he committed to Clemson, the true freshman didn’t allow his emotions to get in the way during the game – he was just happy to be a contributor when he could.

“It was great just seeing all the orange in the stands and all the fans and the Clemson family’s support. Just getting out there with my brothers and running down The Hill for the first time was a great experience,” he said.

Watson admitted that he noticed some of the fan reaction as he stepped on the field in front of the home crowd. The attention hasn’t gone to his head, though.

He said, “I just go with the flow, play my role and try to be the best teammate I can be. Coach Morris and Coach Swinney call the shots, so whatever they want to do that’s best for the team and we’re going to go for it.”

Last year’s 51-14 loss to Florida State at Death Valley was a huge blow to the Tigers’ momentum. With the next game versus the Heisman winner and the number one team looming, the 2013 game is still fresh on everyone’s mind. Watson was in the stands during the game and experienced the Tiger’s defeat as a recruit, but now he’s says he is ready as a player to go into Tallahassee and try to knock off Florida State.

“I know all the seniors and all the guys on the team that played last year really want that, and I’m a part of that now,” he said.

Watson is confident in this Clemson team and hasn’t been sucked into the hype surrounding the Seminoles. He explained, “I really don’t know anything about them...These next two weeks I’ll just be watching them on film and helping my teammates get ready and prepare for that game.”

He's also confident in the young players who saw more time on the field Saturday. Specifically, the quarterback and his roommate Artavis Scott

Even though Clemson may not see an end to the quarterback battle in the next week or two, both Stoudt and Watson have positive outlooks on the season. Watson said that he hasn’t felt any reason to be nervous before taking the field in the first two games, and returned to the same argument Stoudt has expressed – football is supposed to be fun.

“I was about the same last week [against Georgia]. I was still comfortable and poised and just out there having fun.” He continued, “I just go with the flow…whenever they put me in I’m just going to take advantage of my opportunities.”