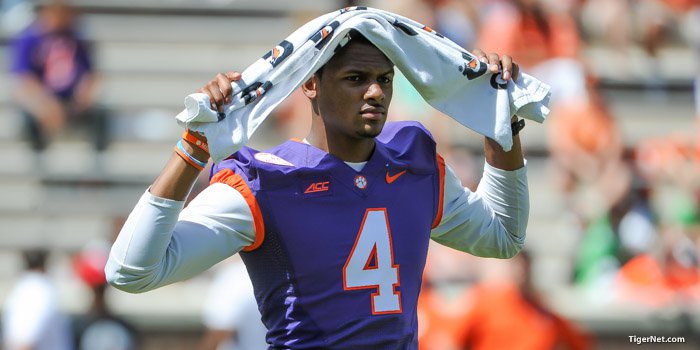 There is plenty of excitement about Saturday’s Clemson-Notre Dame showdown. here already has been plenty of pregame talk back and forth between the Tigers and the Fighting Irish.

College Gameday’s crew will arrive on the Clemson campus this week and hold its showcase broadcast Saturday morning. And the top-15 contest will be televised by ABC in front of a sold-out Clemson Memorial Stadium.

Deshaun Watson
So. Quarterback
#4 6-2, 207
Gainesville, GA
View Full Profile . With everything that is going on surrounding the game, Watson has remained his usual calm self.

“Just prepare the same and have fun with the preparation and the process,” Watson said of his focus. “Not many people get to experience what we’re going to experience this week. Just have fun and do what we love to do and perform. I have to be level-headed and make sure everyone is being calm and not getting too excited, and if adversity comes around, not get too far down on themselves.

“I just try to get everyone pumped up but at the same time, stay on the same level so we can focus and perform to our best.”

Watson likes the way he has performed so far this season.

He played one half each against Wofford and Appalachian State and then led the Tigers to a win at Louisville in just his second career road start (the other came last year at Georgia Tech in a game in which he got hurt).

Watson has completed 58-of-78 passes for 641 yards. He has thrown seven touchdowns and three interceptions (more than the two he threw as a freshman).

“I’ve played pretty good, especially with the meetings I have had with (quarterbacks coach Brandon) Streeter and (head coach Dabo) Swinney,” Watson said. “They think I have been playing lights out. The first two games I only played a half, and the first road test at Louisville, I thought I played pretty good. That was my best grade so far, even between the first two games, it was like a 96 or 98 percentage. I think I’ve been playing pretty good and just getting better so far.”

Watson had two of his interceptions in the game against Louisville, one on a throw to tight end Jordan Leggett

“The one to Jordan Leggett, of course, I kind of rushed it,” Watson said. “If I throw that ball 10 times, I probably hit it, if you’re counting that one, nine times. It’s just one of those moments that everyone’s gonna have that moment where they know they should have made the play, and it’s real easy, and they don’t at that time. It happens in the game, and you learn from it.”

Watson also didn’t sound too concerned about the Tigers’ long layoff. They haven’t played since beating Louisville on Sept. 17 to improve to 3-0.

“Coach Swinney and all of the coaching staff does a great job of making sure we have a certain amount of time and just really preparing one day at a time and not putting too much in our mind. And then when we do get ready for the game time, we’re ready and we know the plan and we just go out there and cut it loose and have fun.”

Have fun and enjoy the process of getting ready for one of the week’s marquee games; that’s Watson’s focus.

“I really can’t say for everyone else; just really embrace the moment and just know your priorities and know what you’ve really gotta focus on to get ready for this game,” Watson said. “College Gameday coming to town is going to be extra exciting for more people in town. The students are going to be asking questions. You’ve just really gotta know how to balance everything up.”