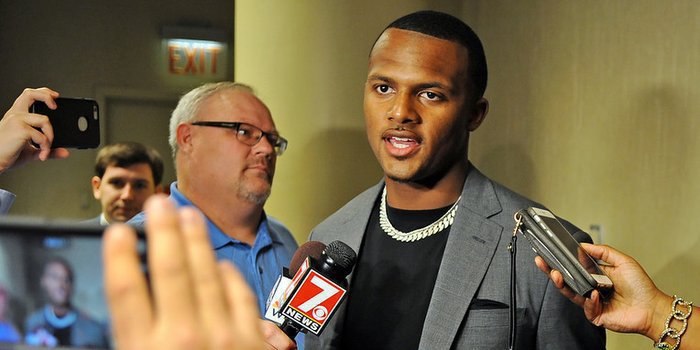 GREENVILLE – The talking heads in the NFL are busy trying to forecast where players will wind up in next week’s NFL Draft, and with each forecast about former Clemson quarterback Deshaun Watson there seems to be more criticism than praise.

Watson says those talking heads – like Mel Kiper and Todd McShay – are irrelevant.

Watson was in Greenville Thursday night to receive his Player of the Year Award from the South Carolina Football Hall of Fame, the second consecutive year Watson has won the award and the fourth consecutive for a Clemson player. Former Clemson and Pittsburgh Steelers’ linebacker Levon Kirkland was also honored as he was inducted into the hall of fame.

Watson met briefly with the media before the event, and he smiled when asked about the criticism that seems to follow him.

“All that stuff is irrelevant,” Watson said. “It is random people’s opinions. It is what they assume.”

Watson, who will be in Philadelphia, Pa., as one of 27 players that will be participating in the NFL Draft Experience, is said by the draft experts to fall somewhere between No. 2 and No. 25 in the first round of the draft. However, McShay told the media earlier this week that he has Watson ranked as low as 28th on his board.

“Watson is my 28th-ranked player now, while Marcus Mariota ranked fifth overall in 2015, so they're not similar in that sense,” McShay said. “While Mariota displayed better accuracy coming out of Oregon than Watson's tape at Clemson, they both struggled to marry their eyes with their feet when going through progressions. That's a product of the schemes they played in, which were very focused on playing as fast as possible.”

Watson said he’s learned to separate what the media says versus what he is hearing from NFL clubs.

“Going through this process you really learn how split the media and the real teams’ mock draft are. It really is. I don’t really pay attention to any of that stuff,” he said. “None of it is accurate and none of it is a hundred percent correct.”

Watson worked out for both the Bills and Texans last week, while early speculation has Watson going to the Bears with the third overall pick.

“It’s just kind of wait and see which one selects me,” he said. “Whatever situation is best for the team. I just want to be able to come in compete and play football so whatever situation helps the team win will be great for me. I’m going to be anxious to be in a pro situation, and I know I am going to have to earn my rights and my respect from the team.”

He was asked what kind of player that team will be getting, and he smiled and said what everybody else already knows – he’s a winner.

“They’ll get a dynamic leader who relates to all the people in the locker room and all the players,” he said. “They will get a guy with a great attitude. A guy who will put in the work and keep fighting and they are getting a winner, a champion.”