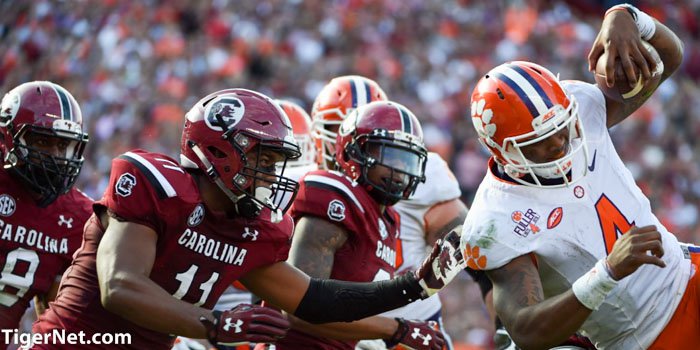 Watson had his third game this season with 200 pass yards and 100 rush yards. Houston's Greg Ward Jr. (2) is the only other FBS player with multiple such games this season. He finished with 21 rushes for 114 yards and three touchdowns and was 20-27 for 279 yards through the air as Clemson avoided the upset.

South Carolina ends its season 3-9 and will begin in earnest its search for a new head coach.

The Tigers also rolled up over 500 yards of total offense for the eighth consecutive game and was 9-of-12 on third down.

The Tigers have never won 13 games in a season – teams used to play 11 games plus a bowl game – but will have the chance to win No. 13 next week when they take on North Carolina in the ACC Championship Game in Charlotte.

The teams played a scoreless first quarter that featured three turnovers, two by Clemson on promising drives. The Gamecocks took their second drive of the game down the field and inside the Clemson red zone, but Perry Orth threw an interception to Adrian Baker to thwart the scoring chance.

Clemson handed the ball back on the following drive as Gallman fumbled it away inside the South Carolina 40. The ensuing drive ended at their own 40 as Gallman and Watson fumbled an exchange on a handoff. The Clemson defense held, however, and Elliott Fry missed a 55-yard field goal to keep the game at 0-0.

The Tigers forced another Gamecock punt early in the first quarter, and took over at its own 17 yard line. It took Clemson eight plays to dent the scoreboard. The big play on the drive was a 27-yard run by Gallman – and Watson finished it off with a 5-yard leap into the endzone for the score. Watson then gave “dab” to the South Carolina student section and retired to the bench with a 7-0 lead.

Clemson forced another punt, but that punt covered 68 yards and pinned Clemson at its own seven yard line. It took Clemson just eight plays to cover the length of the field, and the drive ended with a beautiful 55-yard pass from Watson to Deon Cain and Clemson led 14-0.

The Gamecocks answered with a nice drive that included a 47-yard run by Lorenzo Nunez after he was hit behind the line of scrimmage by Christian Wilkins. Facing a 3rd-and-goal at the Clemson three with 32 seconds left on the clock, Orth’s pass to Cooper in the back of the end zone was incomplete and the Gamecocks settled for a 20-yard Fry field goal. Clemson led 14-3 at intermission.

The Tigers took the opening drive of the second half and scored with ease. On the second play of the drive Watson rolled out for a 16-yard gain, then hit Artavis Scott for a 27-yarder into Gamecock territory. Scott lost the ball and it was originally ruled a fumble, but the review gave the ball to the Tigers at the Gamecock 30. The next play saw Watson roll right and follow his blockers into the endzone for a 30-yard scoring run, and Clemson led 21-3 early in the third.

The Gamecocks didn’t go away, however, and Orth hit Deebo Samuel on a 7-yard pass into the corner of the endzone to make it 21-10 Clemson with 7:43 to play in the third quarter.

Once again, however, the Gamecocks responded and Cooper made Clemson pay with a 57-yard touchdown reception that made it 28-17 with just eight seconds remaining in the quarter.

The Tigers seemed to be putting another promising drive together to start the fourth quarter, but Scott fumbled after a short reception from Watson and the Gamecocks had a short field at the Clemson 26. Four plays later, Shon Carson scored on a short run and the Gamecocks added a two-point conversion, making it 28-25 with 12:19 to play.

The Tigers answered like a team with a lot on the line, and it was helped by a personal foul penalty against South Carolina in the kickoff allowed the Tigers to start the drive at their own 40. Six plays into the drive Clemson faced a long third down at the Gamecock 33, but Watson hit Trevion Thompson for a 24-yard gain on the sideline to keep the drive alive. Three plays later Watson dove in from the three for his third rushing touchdown of the day. However, Huegel missed the extra point and Clemson led 34-25 with just over eight minutes to play.

Clemson ran five minutes off the clock on the next drive but elected to punt, and South Carolina had one last shot with just over three minutes to play. However, Orth was stopped short on fourth down and Clemson ran out the clock for its 67th victory in the series.

South Carolina's offense wasn't finished, however, as Orth led the Gamecocks down the field for a seven play drive that was capped off by an 11-yard pass from Orth to Shon Carson to account for the final points.

Clemson vs. South Carolina Box Score
Comment on this story