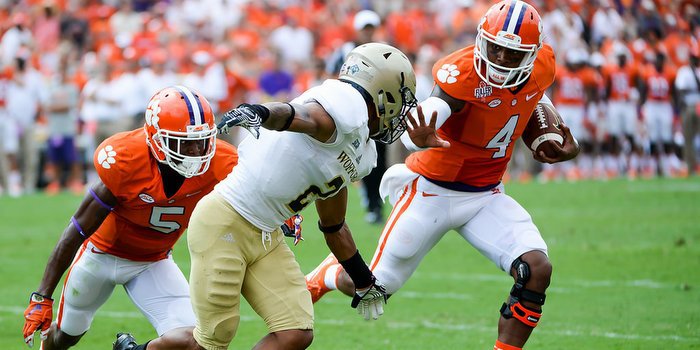 Watson throws a stiff arm during Clemson's win over Wofford

CLEMSON – On Thursday night, the eyes of the nation will be on Clemson and Louisville as the Tigers head to Kentucky to take on the Cardinals in a nationally-televised matchup. Those same eyes will also get a good look at sophomore quarterback Deshaun Watson

Deshaun Watson
So. Quarterback
#4 6-2, 207
Gainesville, GA
View Full Profile , who will be making just his second career start on the road.

That’s okay with Watson, who says he is ready for the moment.

No. 9 Clemson travels to Louisville to take on the Bobby Petrino-coached Cardinals, a team that has lost two heartbreakers to start the season and sits at 0-2. Watson expects the Cardinals will be fired up to not only avoid an 0-3 start but play well in front of the nation.

“They are very athletic and very well-coached. They are going to be fired up to play against us. They are a great team,” Watson said Monday in the WestZone. “They haven't had the breaks the first two weeks, but they are going to come out fired up Thursday night, and they are playing at home, so we have to play our 'A' game. Each week, we get everybody's best, so we have to be ready to play.”

Watson has gotten off to a strong start this season – he is 11th nationally with a quarterback rating of 184.64. He has completed 37-of-48 passes for 442 yards, five touchdowns and one interception. His completion percentage is 77.1, and he is averaging 9.2 yards per attempt.

The first two games haven’t exactly been on the national watch list – the Tigers defeated FCS foe Wofford in the opener and Appalachian St. of the Sun Belt Conference last weekend. This Thursday will be different, and Watson says he will be ready and that he feels like he plays better when the lights are brighter.

“I enjoy it. This is what I came to Clemson for is games like this,” Watson said. “To play on national television and have people look at us and watch us play and perform. This is the moment I've been waiting for since middle school and wanted to play college football. Committing here and signing the papers, I knew that games like this were going to happen each year, so I have to prepare and be ready for it. I think I am ready for the moment.”

Watson’s first road start didn’t end well for the Gainesville native or the Tigers – he was knocked out early in the Tigers’ November loss at Georgia Tech and didn’t return until the final regular season game against South Carolina.

However, he said doesn’t think he will be nervous facing the amped up Papa John’s Stadium crowd.

“I bet every player will tell you they have butterflies. But really, just when the ball is kicked off and after that first play I am ready to go,” he said. “I am anxious to get on the field. I am tired of waiting, and I'm just ready to get out on the field and play ball. For some people, it might be (time to be nervous), but I am used to the night games. I am ready for every moment, and any time we kick off I will be ready.

“I think every moment I am going to be calm. That is just the person I am. I don't let anything or too much distract me or get me rattled. I've always been taught 'snap and clear' which is after one play just move on to the next. My high school coach taught me that. That is always on my mind. I never try to get rattled because you never know when in that next moment you will need to make a play. You have to be calm.”

Watson has something most quarterbacks don’t have – an ability to block out the crowd noise when it matters.

“You hear it. Some people may say that they can block it out. But of course, you hear the noise,” he said. “You have to have that zoom focus that Coach Swinney is always talking about, and you have to focus on that moment and on that play. It's one of those things that you have to have and can't really teach.”