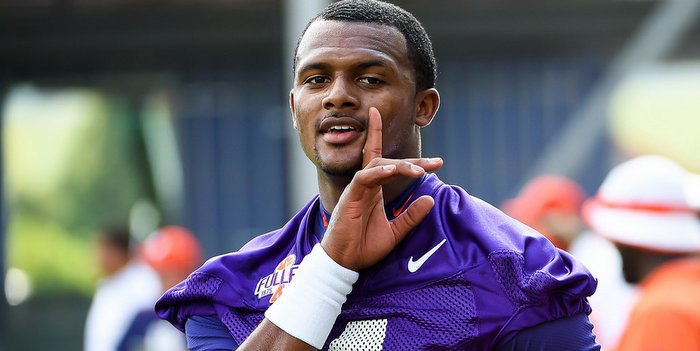 Watson has high expectations for this season

Deshaun Watson said his Clemson offense isn’t ready for the start of the 2016 season.

But just halfway through August, the junior quarterback doesn’t sound too concerned.

“We’re not close. We still have three weeks,” Watson said after Saturday’s scrimmage. “It’s camp, so we’re putting in a lot of information, a lot of different things, so we’re not where we want to be, and we won’t be until later on in the season.

“It’s a work in progress, and great teams always get better each day. They don’t ever get complacent or decide when they’re ready. You’re trying to grind to be where they want to be.”

Watson had a standout sophomore season, leading the Tigers to a 14-1 record and a berth in the College Football Playoff. Clemson’s only loss came to Alabama in the national championship game. That season has raised the expectations outside the program as Clemson chases its second national title to match the 1981 team’s accomplishment.

That has led to plenty of attention (and magazine covers) for Watson this offseason, and he is comfortable with that.

“It comes with the territory. I knew it from the get-go,” Watson said. “That’s why I picked the position to play quarterback. I knew the role and the expectations that were going to come with it, so it’s nothing that I haven’t handled. God put me in this position for a reason, so I’m fully prepared for it and live in the moment and do what I do, the right things.”

Watson’s focused preparation helps him remain cool in the huddle in key spots. Watson is 18-2 as Clemson’s starter (17-1 when he finishes the game healthy), and he has completed more than 67 percent of his career passes.

“I feel good. I’m confident. I’m comfortable. I trust my guys, and I trust my coaching staff and what they’re preparing me with. I trust the trainers and the weighlifting coaches that put the muscle on over the offseason and training camp and keeping me healthy, so it’s been good so far.”

Watson expects things to continue to go well, especially with all the talent surrounding him.

The Tigers’ backfield is deep and talented, led by Wayne Gallman and Adam Choice, and the receiving corps is deep, as well, featuring Hunter Renfrow, Artavis Scott, Mike Williams, Deon Cain and Ray-Ray McCloud, along with tight end Jordan Leggett.

“We’re all comfortable,” Watson said of his chemistry with his receivers. “We’re still fixing some times on different plays, routes and stuff that we were putting in. But, at the end of the day, I feel comfortable with all my receivers that I have had a chance to go into a game with or practice with.

“We’re all comfortable with one another to communicate with, so it’s been good.”