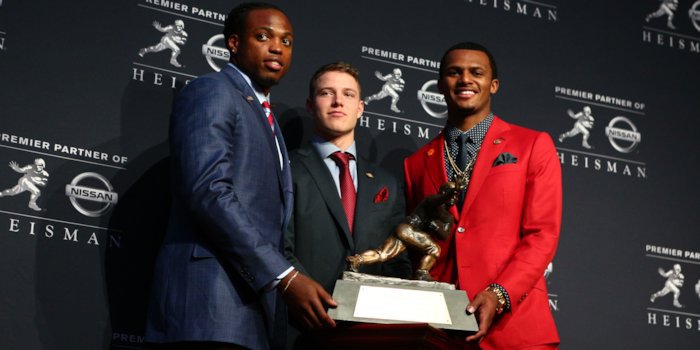 NEW YORK, NY – Deshaun Watson fell just short of winning the 2015 Heisman Trophy Saturday, but can kick-start his 2016 campaign against Oklahoma in the Orange Bowl later this month.

Derrick Henry won the trophy with 1832 points, while Christian McCaffrey finished second with 1539 and Watson finished third with 1165. Watson's 1,165 points are the third most for a third-place finisher in history.

Watson and the Tigers will play Oklahoma in the College Football Playoff Semifinal in Miami on New Year’s Eve. The winner of that game will play for the National Championship and would be a good opening stanza for Watson’s 2016 campaign.

The presentation was made by New York’s Downtown Athletic Club at the Marriott Marquis on Broadway.

Watson was Clemson’s first Heisman Finalist. Steve Fuller finished sixth in the 1978 voting and C.J. Spiller was sixth in the 2009 voting, but neither received an invitation to New York. Those are the only Clemson players to finish in the top 10 of the Heisman voting since the award began in 1935.

The native of Gainesville, Ga. has completed 287 of 413 passes for 3,512 yards and 30 touchdowns. Additionally he has 887 yards rushing in 163 attempts and has 11 rushing touchdowns. He is the only player in the nation with at least 800 yards rushing and 3,500 yards passing. In fact he is the first player to do it since 2012 (Johnny Manziel of Texas A&M).

Watson has accounted for 41 touchdowns rushing and passing, fifth best in the nation and he ranks ninth in total offense per game and 11thin passing efficiency. He has gained at least 380 yards in each of his last six games and has guided the Clemson offense to a record nine straight games with at least 500 yards total offense.

Watson is a big reason Clemson has won 16 consecutive games, a school record, and has already established a season mark for victories (13), and ACC wins (nine). Clemson won the ACC Championship last Saturday with a 45-37 win over No. 8 North Carolina. Watson threw for 279 yards and rushed for a career high 131 in the victory.