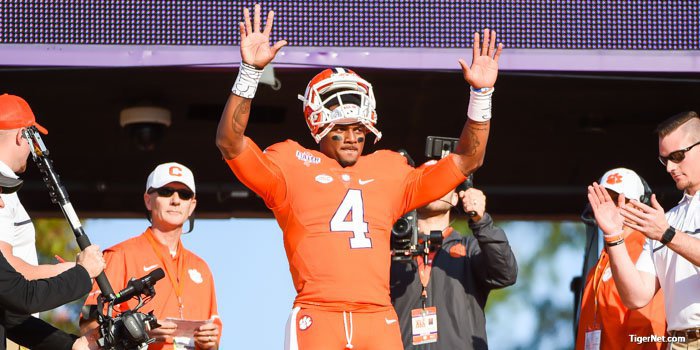 Deshaun Watson isn’t the favorite to win the Heisman Trophy Saturday, but he added to this season’s Heisman-worthy performance with a Heisman-worthy speech at the Embassy Suites in Baltimore Friday night.

Watson was in Baltimore Friday night to receive the Johnny Unitas Golden Arm Award. The award is given annually to the top college quarterback who is on set to graduate with his class. Watson is on pace to earn his undergraduate degree on Dec. 15.

Candidates for the Golden Arm Award – which has been presented at the end of each college football season since 1987 – must be college seniors or fourth-year juniors on schedule to graduate with their class. In addition to the accomplishments on the field, candidates are judged on their character, citizenship, scholastic achievement, and leadership qualities.

Watson was presented the award at the Embassy Suites Baltimore Inner Harbor & The Grand in downtown Baltimore, and he started out by saying he didn’t have a speech prepared.

He then delivered something fantastic.

“I don’t really have a speech, but I first want to thank my Lord and Savior Jesus Christ for giving me the opportunity and the ability that I have to play football, for my great health, for putting me in this position to have the opportunity to do great things and to do special things. I also want to thank Johnny Unitas, Jr. for this award and everyone else who has helped with this.

“It’s a real honor and I’m very appreciative of it. Thank you for the kind words and for presenting this award to me. Thank you to my mother and my aunt for raising me right and teaching me the ropes and teaching me the right way. Thank you guys and I love you. This is special especially after the adversity and time you went through dealing with your cancer and how you were able to stay strong and not give an excuse. You never gave up and always stayed there regardless of the situation.

“I want to thank my teammates and my coaching staff for just giving me the opportunity and helping me to be in this position because without those guys I wouldn’t be here. Those guys make a lot of plays for me and put me in the right position to do great things and to do special things.

“I just love the game of football and I’ve probably been playing it since the age of six or before that just playing in the backyard. It’s just something that I love to have fun doing. As I got older, I realized more people were looking up to me from little kids to grown men and women. They were supporting me and looking at me to do the right things.

“As a young kid, seeing Warrick Dunn give us the habitat home and seeing how he uses his platform of football to help others, I decided as a little kid that I wanted to do the same thing. As I got older, I got more into the community just to help people and show them the ways to do the right things and that if you want to achieve something then you can do it. Everything is possible if you put your mind to it and you have full force and 110-percent. That’s what I want to do with my platform. I want to be more than just a football player. I want to be a guy that’s great in the community, a good citizen, loves people. I love to talk to anyone that is willing to talk to me. I want to be as knowledgeable as a I can and I want to be able to learn as much as I can. I want to use this platform for more than just football. That’s one of the reasons I wanted to graduate so early and I was blessed enough to do it three years so I can go on and play in the NFL for however long that lasts with my degree and then I want to come back and get my Master’s to learn much more.

“At the end of the day, I just want to thank everyone for coming out here and for the award. It’s a great honor to be in this family and this fraternity from all of the great names who won this award previously. My first time in Baltimore has been great. It’s a beautiful city. I’m just enjoying it and soaking it all in and enjoying the moment. Thank you, God bless and Go Tigers.”

With the Unitas award, Watson wins the Triple Crown of quarterbacking awards – the Manning, Unitas, and Davey O’Brien.

On the ground in Baltimore for the Golden Arm Award with John Unitas Jr. #ALLIN pic.twitter.com/DzXYFnhrZZ